The Muslim Brotherhood's latest statement, and offer of dialogue, is rife with dull redundancy. 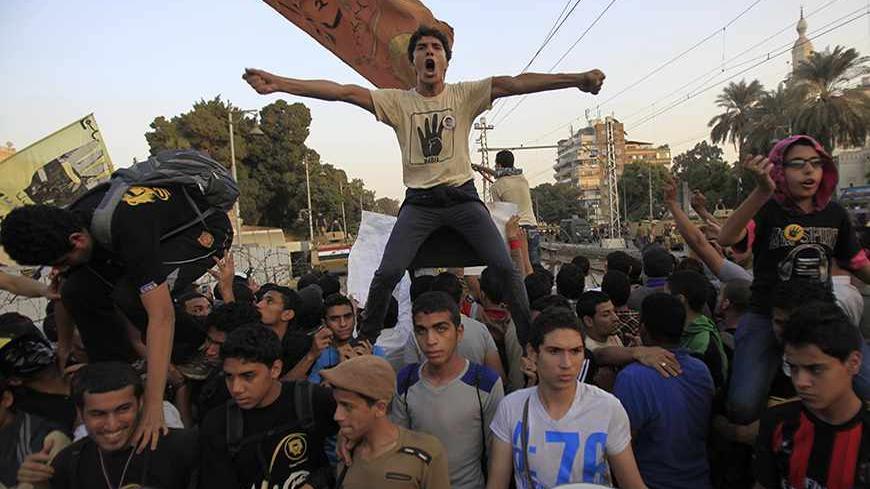 Supporters of the Muslim Brotherhood and ousted Egyptian President Mohammed Morsi shout slogans against the military and Interior Ministry, during a protest in front of barbed wire, army soldiers and the riot police at El-Thadiya presidential palace in Cairo, Nov. 15, 2013 - REUTERS/Amr Abdallah Dalsh

As the new Egyptian draft constitution nears finalization, the National Alliance for Supporting Legitimacy has issued an 1,800-word statement titled “A Strategic Vision.” In brief, the Muslim Brotherhood, hiding behind the alliance, now wishes to hold a dialogue (with the interim government?) and give up on Mohammed Morsi — perhaps after finding out that its plan to sabotage the road map has failed as Egyptians are about to vote on the new constitution.

The statement was rife with dull redundancy. It reminded me of Morsi’s last speech. During that ominous address, Morsi repeated the word legitimacy 59 times. In the new statement, the word “coup” was used 40 times. The statement repeatedly mentioned the terms “ending the coup,” “breaking the coup” and “rejecting the coup.” Additionally, the word “legitimacy” appeared 14 times. And as we know, a “coup” is the opposite of “legitimacy,” and “breaking the coup” is a synonym of the latter. Therefore, the total use of the words legitimacy, breaking, terminating and rejecting the coup amounts to 54. As such, the Muslim Brotherhood succeeded in reviving Morsi’s rhetoric in a new form, yet without Morsi, since the statement totally avoided any mention of the ousted president and neglected the demand for his reinstatement.

The statement reiterated the necessity of achieving the aspirations of the revolution, despite the fact that many revolutionaries perceive the Muslim Brotherhood as an enemy to the revolution. According to them, the Brotherhood has betrayed the revolution, prevented it from reaching power and exploited the blood of martyrs to its advantage. At first, as announced by Essam el-Erian, the Muslim Brotherhood refused to take part in the revolution. Four days after its eruption, members of the Brotherhood took to the streets for one apparent reason: to use their participation as leverage. They soon offered their withdrawal in secret negotiations with Omar Suleiman two days after their belated participation. This was done in order to yield political gains in terms of releasing prisoners, including Khairat al-Shater, and to be allowed to form a legitimate political party, apparently while maintaining their secret organization, in exchange for withdrawing from the square and agreeing that Suleiman stay as "acting president" until his official election the following September.

When Hosni Mubarak and Suleiman left the scene, the Brotherhood, this time with the Supreme Council of the Armed Forces (SCAF), used its early preparedness to abort the revolution as a sign of its loyalty and willingness to cooperate. It tried to exploit this event and ride the wave of the revolution. It agreed with the military council to be tasked with amending the 1971 constitution under the pretext that it has more experience and is far more organized, even claiming to have control of the square. The council discovered that these claims were false starting with the protest of May 27, 2011, which was boycotted by the Muslim Brotherhood, who called it the "Friday of Betrayal." Practically, the Muslim Brotherhood controlled the drawing of a corrupt road map, creating a fake legitimacy in order to carry out their “tamkeen,” or “empowerment,” enterprise. The Muslim Brotherhood used the crooked road map to achieve maximum  gains for itself, craft a constitution matching its ideology and grab all power while Brotherhoodizing the state and its institutions.

Apart from ignoring any mention of Morsi, the statement had nothing new to offer. It did not include any initiative that could be practically implemented. The statement mentioned that the general framework needed to end the crisis consists of “supporting the anti-coup revolution of the Egyptian people,” even though the ousting of the Muslim Brotherhood from rule came as a result of the uprising of the Egyptian people in their millions who took to the streets to call for early elections or the departure of Morsi.

The statement vows that “peaceful resistance is the only way to put an end to the coup and restore the democratic course” while ignoring that the Muslim Brotherhood was the first to resort to violence. The group killed protesters and established torture chambers to inflict fear on the people ever since the incidents in front of the Ittihadiya Palace. Residents of Bein al-Sarayat and El-Manial whose sons were murdered at the hands of Morsi supporters are unlikely to support the Muslim Brotherhood’s claims of peacefulness. Brotherhood supporters also occupied the al-Nahda and Rabia al-Adawiya squares, assaulting and killing local residents, passersby and policemen. In addition, they attacked churches and police stations in Kerdasa and Delga. On top of this is the announcement of Mohammad el-Beltagy, in which he drew links between stopping terrorist operations in the Sinai to the reinstatement of Morsi.

The statement also objected to the constitutional committee under the pretext that it was not elected, even though the elected Muslim Brotherhood committee comprised of only members of the Muslim Brotherhood and allied parties. They all belonged to one sectarian, extremist current representing a small portion of the Egyptian people.

Suddenly, after scores of lines elaborating on “supporting the Egyptian people’s anti-coup revolution,” the statement called with some reluctance for a dialogue. The statement reads, “Despite its support for the Egyptian people's revolution, the alliance does not reject any serious and sincere efforts toward a serious political dialogue to bring Egypt out of its crisis, according to the aforementioned governing values, and through a consensus around serving the interests of the homeland ... ”

It is hard to know for sure what the Brothers want, and why this wish for dialogue did not surface over the past months as they wreaked havoc in the streets with their violent militia marches. Unless tools of peaceful dialogue include erecting combat fortifications and military roadblocks to divide Cairo and Giza; raiding police departments and government facilities; and inciting attacks on churches, it would seem that the Brotherhood followed a scorched-earth strategy, pushing Egypt toward civil war, not dialogue.

The statement also included certain conditions. It noted, “Any serious dialogue aimed at ending the crisis necessitates four steps.” First, there should be an atmosphere of freedom needed for the political process, possibly a message to the government demanding the release of the detained Brotherhood leaders. The second step involves “confirming the governing values needed for a dialogue.” The statement sees the dialogue as a “means to exit the current crisis.”

The statement shows the Brotherhood’s political bankruptcy, as a group that is too emerged in denial and self-illusion to have sound judgment of reality or develop a viable strategy to rescue itself. The statement neglects basic considerations, which make its dialogue conditions unrealistic.

First: The Brotherhood has almost exhausted all of its cards — violent protests, terrorism, intimidation and calls for foreign intervention — in hopeless attempts to incapacitate the state and disrupt life in Egypt. Yet life went on, and the state survived.

Second: For almost three years, people endured severe hardships as the Brotherhood kept driving the country in vicious loops, setting up its own corrupt road map in March 2011. Now, the majority of Egyptians have had enough of these political hoaxes and circus tricks. They do not intend to reconsider the road map. Those who dislike it can mobilize their supporters to reject the draft constitution in the coming referendum.

Third: The deteriorating popular support of the Brothers and their shrinking political influence have become apparent to everyone. Why, then, would Egyptian people and/or the interim government now surrender to such abusive terms when the conditions unilaterally dictated by the Brotherhood threaten to take the process back to square one and increase the people’s suffering?

Fourth: After all this moral incitement, provocative rhetoric and claims about monopolizing legitimacy, the Brotherhood youth and allied jihadist movements will not easily settle for a dialogue under any realistic conditions, even if accepted by Brotherhood leaders. Consequently, they will keep demanding impossible conditions, thus killing any hope for dialogue.

The Brothers should think of an initiative that at least answers the following questions:

Seeking to establish political competition between law-abiding political parties on the one hand, and some illegal, covert organization on the other, is pointless. In the past, this was a part of a theatrical competition that the regime allowed to serve its own purposes, but is no longer tolerable.

Plans to remedy its secret organization and illegal operations would provide Egyptians with the essence of an initiative that they could be interested in hearing, instead of giving them a redundant 1,800-word statement that resembles Morsi’s nonsensical rhetoric, which Egyptians hardly miss.