The Egyptian-American community is divided and frustrated over US policy toward Egypt. 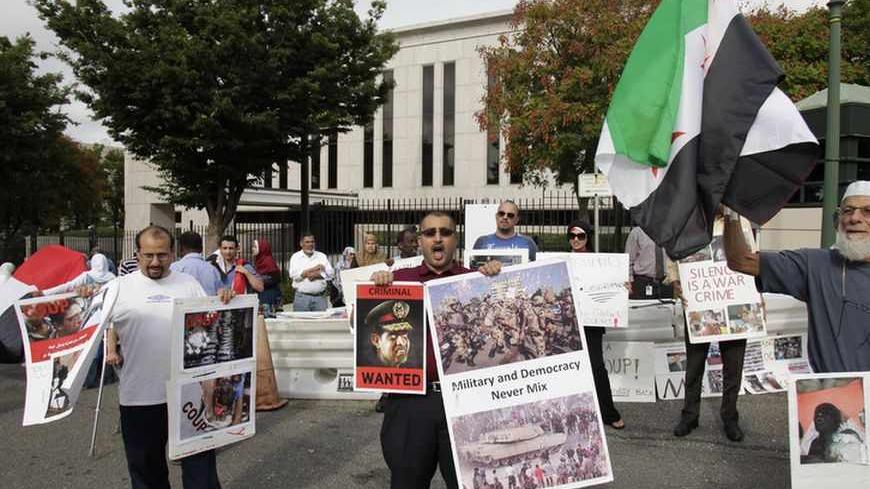 Activists from the Egyptian-Americans for Democracy and Human Rights organization protest outside the Egyptian Embassy in Washington, D.C., Aug. 19, 2013. - REUTERS/Yuri Gripas

For the second time this summer, Muhammed Shoubir rode from New York City to Washington, DC, to protest what he calls the “anti-democratic military coup” that on July 3 ousted former president and Muslim Brotherhood member Mohammed Morsi.

With glasses and a trimmed beard and mustache, Shoubir, originally from Tanta, bears a striking resemblance to Morsi, whose Islamist party he says he supports, though he is not a member. In the 2011 Egyptian presidential elections, he voted from abroad for the independent Islamist Abdul Moneim Aboul Fotouh, and then for Morsi in the runoff.

“We need to send a message to all American people about what’s happening in Egypt,” said Shoubir, referring to the military’s bloody dispersal on Aug. 14 of a pro-Morsi sit-in at Rabia al-Adawiya Square in Nasr City, Cairo. “We are not there to be with them.”

On Saturday, Aug. 31, several hundred Egyptians from across the country gathered in Lafayette Park in front of the White House, one in a string of protests organized by Egyptians in America who oppose the July 3 military takeover and largely support the deposed elected Islamist leader. As more busloads joined, they marched to the office of the Egyptian military attaché, chanting slogans in English calling to “Free Egypt.”

Although in Egypt the anti- and pro-military sides have grown increasingly polarized, with little room for dissent, the same major rifts, on a far less violent scale, are dividing Egyptians in America. Couched in pro-democracy and human rights language, the anti-coup camp in the United States, like their counterpart in Egypt, is trying to cast their appeal to American democratic sentiments.

“As Egyptian-Americans we stand by our American principles of democracy and human rights,” said Akram Elzend, a co-founder of Egyptian Americans for Democracy and Human Rights. “There’s a democratic process that Egyptians should follow.”

Early that Saturday, Shoubir and about fifty others gathered at a mosque in Astoria, Queens, greeting each other with the religious greeting "Assalam alaikum wa barakat." As they waited to board the chartered bus, participants changed into yellow T-shirts with the black imprint of a hand holding up four fingers. Several women donned veils with the black-and-yellow symbol.

This sign — first publicized by the Turkish President Recep Tayyip Erdogan — started as a symbol of solidarity with the anti-coup protestors killed in the Rabia massacre. For many Egyptians, the hand carries a sectarian connotation, seen as support for Morsi’s failed presidency.

Sharif Ahmed, an organizer of Saturday’s DC protest, said that he and other like-minded Egyptians are trying to reappropriate the image — invoking rhetoric that resonates well with the American public and lawmakers. “We think it’s no longer a sign for one group or one ideology, but something that represents the revolution,” Ahmed said in a phone interview.

Ahmed works with EADHR, one of several networks recently created via Facebook, email list serves, and word of mouth. EADHR and similar groups are working to counter the message championed by other Egyptians in America — that the military takeover was an expression of popular will spurred by Morsi’s disastrous and dictatorial rule.

That Saturday morning as Shoubir’s bus rolled out of Queens, the protesters aboard recited in Arabic the Muslim prayer for travel. A short round of "Isqat hokum al askar!" (Down with the military regime!) ensued, followed by a reminder to pay the round-trip bus fare of $30, with a requested donation of $10 dollars or more to cover other expenses.

A protester gave a short sermon in Arabic, quoting the Quran and reminding the group that they were there to support “huriya, shar’iyya and democratiya” (freedom, legitimacy and democracy), to oppose injustice in Egypt, Syria, and Palestine, and to honor the Rabaa martyrs. After several rounds of chanting, some protesters drifted off to sleep, while others posed for pictures in their yellow shirts.

Along with the EADHR, The Muslim American Society (MAS), a non-profit organization providing social, religious, and education services, was a co-sponsor of the event. Founded in 1993 and based in Falls Church, Va., MAS had several founders who reportedly were Brotherhood members, ties that raised red flags among conservative American watchdog groups.

“I have a problem with how the media says that anyone who supports those in Rabia is a terrorist,” said Sarah Hamdy, 26, originally from Alexandria, now a Jamaica Heights resident.

Like the other protesters interviewed, Hamdy stressed that she was not part of any political party or organization. She was sympathetic to the ideals of the Brotherhood-affiliated Freedom and Justice Party, but at different points she was more aligned with April 6 and Kazeboon, both non-religious, liberal revolutionary movements. She and others interviewed on the bus dismissed claims that Brotherhood affiliates were responsible for church burnings in Egypt, instead blaming counterrevolutionary forces.

As the bus rolled on, Hani Muhamad Arafa, a soft-spoken young man with a slight build spoke in Arabic over the loudspeaker about his experiences at the Rabia sit-in. Originally from Beheira, he had been at the Rabia sit-in for weeks. He said he was there the morning military forces moved in with tear gas and bullets. He recalled the friends and acquaintances murdered that confusing day. “We had no idea the army would act this way,” he said, still shocked weeks later.

At the DC rally later that day, “It’s a coup, it’s a coup!” echoed through the loudspeaker, interspersed by the anti-coup song “De thawra wala inqilab” (Revolution or Coup). The Rabia T-shirt was on full display — on sale for $10 — as was the Rabia hijab, or headscarf, with nearly all women wearing a veil and modest attire. Protesters shared similar sentiments to the Queens crowd — only in English, rather than Arabic, presumably so those passing by could understand.

“For those of you afraid of the sun, remember that the people in Rabia faced bullets!” an organizer shouted, urging participants to move from a shaded area into the event’s designated gathering place.

Speaker after speaker denounced the violence in Egypt, calling for a return to democracy. “Thomas Jefferson stood for the same rights as the people of Rabia!” one proclaimed.

Heba, 19, wearing a long head covering and abaya, came from Brooklyn and spoke intensely against the violence in Egypt. “Innocent people are dying and I am against killing,” she said, frustrated that America was still supporting the military. When asked about the Christians and police officers killed, she did not dismiss these incidents as the work of counterrevolutionary forces. “They are martyrs to us as well,” she insisted.

Earlier that morning, Shoubir had expressed regret that Egyptians in America had reached such a polarized state. “I am unfortunately, unofficially not affiliated with some of my family now,” he said. “I see this as an indication of how divided Egypt is.”

Miriam Berger is a freelance journalist with a specialty in media and Middle Eastern affairs. Her writing has appeared on several news sites and publications, including Egypt Independent and Haaretz English. Most recently, she was based in Egypt, where she researched Egyptian media as a 2012-13 Fulbright Fellow and studied at the CASA institute. On the Web: miriamberger.com