Fights erupted between Kurdish militias and groups affiliated with the Free Syrian Army (FSA) in northern Syria after allegations the Kurds did not support an embargo on two Shiite villages in Aleppo. 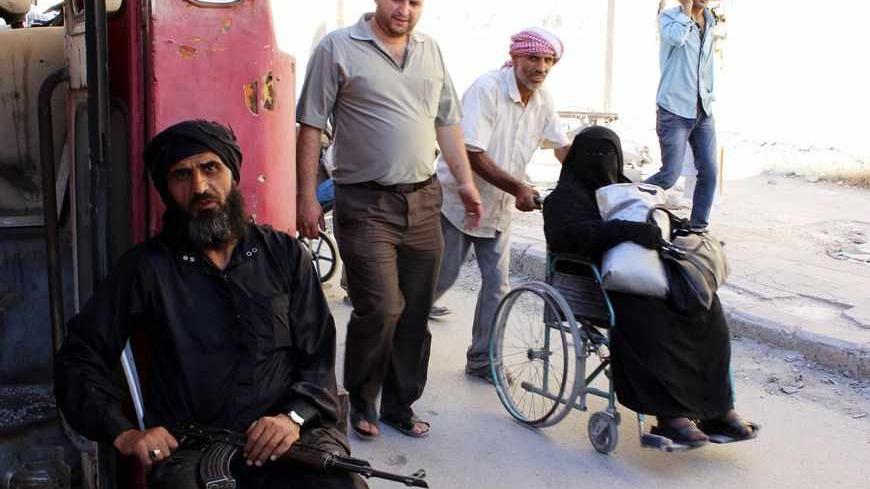 A Free Syrian Army fighter sits at his checkpoint as civilians walk along a passageway separating Aleppo's Bustan al-Qasr, which is under the rebels' control, and Al-Masharqa neighborhood, an area controlled by the Syrian regime, June 5, 2013. - REUTERS/Aref Hretani

Renewed clashes between Syrian insurgents and Kurdish groups have erupted in the province of Aleppo and quickly spread to other cities in northern Syria. Several combatants have been killed in fights between Liwa al-Tawhid and its allies and the Kurdish People’s Defense Units (YPG) since May 25 in the countryside of northern Aleppo, after Syrian rebels accused the Kurdish armed group of supporting the besieged Shiite towns of Nubul and Zahra.

The fighting is leading to worsening conditions for the Kurdish-dominated district of Efrin, where thousands of Arabs and Kurds fled after fighting worsened in Aleppo.

Thomas McGee, a researcher focused on Syrian affairs, told Al-Monitor that prior to the “FSA (Free Syrian Army) siege,” Efrin was already “facing huge problems in accommodating IDPs [displaced persons], especially after the influx from Sheikh Maqsoud [in Aleppo city] when the regime attacked, and the schools and other public buildings that are available are over capacity so people are finding themselves with no shelter at all.”

NGOs fear the fighting could have a negative effect on those who fled and live in Efrin since the FSA surrounded Efrin and besieged it. The prices of bread and medicine have already increased as a result of the FSA embargo.

According to the UK-based Syrian Observatory for Human Rights (SOHR), the clashes took place in the villages of Aqbiya, Deir Mishmish, Kurzelia, Ziyaret and Basila. Fighting also took place in Ain al-Arab, Ras al-Ain and Tal Tamr, but quickly ended.

The fighting didn’t only include Arab fighters of the Islamist group Liwa al-Tawheed, but also Kurdish pro-FSA groups such as the Salahadin brigade headed by Bewar Mustafa, and the Yusuf al-Azimi brigade. A declaration released by 21 groups claimed they would attack the Efrin area and cleanse it of PKK and pro-Assad militias.

However, not all pro-FSA groups supported the attack, and both the YPG and the FSA fight against Assad forces in Aleppo.

Even rivals of the YPG condemned the FSA attack; the Kurdish Democratic Political Union issued a statement “calling on both sides to release civilians as a positive gesture”

Mustafa al-Sheikh, the head of the FSA’s military council, had improved his relationship with the Kurdish Democratic Union Party (PYD) after the FSA signed an agreement with the PYD in Ras al-Ain in February.

PYD spokesman Alan Semo told Al Monitor that the clashes erupted after the YPG refused the entry of FSA fighters in Kurdish villages of Efrin close to Nubul and Zahra. “YPG told them, if you want to go to Nubul or Zahra, go another way. You cannot enter the Kurdish areas; after you enter them, the regime will bomb them.”

The Kurdish politician blamed the FSA for trying to bring the war to Kurdish areas by using Kurdish FSA groups to enter the YPG-controlled villages. According to pro-Kurdish media, the FSA preplanned the attacks in Azzaz.

The YPG’s central command released a statement that suggested that “mercenary groups related to the Syrian Free Army attacked the village of Sherawa in Efrin city, with the approval of the general FSA command. The attack took place in order to loot homes and properties.”

However, the Liwa al-Tawhid brigade accused the YPG of killing Mahmoud Hafiz Isa, commander of the 21st regiment and nine of his men, with “al-Shabihah [pro-government militia] gangs known as PKK,” referring to the Kurdistan Workers Party to which both the PYD and the YPG are affiliated. This allegedly resulted in an attack on the YPG in Aqibah and Ziyarah towns, which are close to Nubul and Zahra.

Basam Mustafa Haji, commander of the Yusuf al-Azimi brigade, told Welati, “Indeed this party (the YPG) continues to violate our treaties and agreements, while there was further deception on its part when it undertook the smuggling of arms and supplies to Nabl and Zahra, and it had seized those things … with smuggling of sheep and ammunition.”

He suggested the fighting started as revenge for the killing of a FSA leader, saying the YPG “opened fire treacherously on the Free (Syrian) Army and killed one of the mujahedeen revolutionaries, along with the assassination of the civilian leader Shamil, who was the leader of the operation 'Echo Qusair.'”

According to the SOHR, the YPG on Friday, June 7, took control over the villages of Basila in Nahiyat shirawa, and Bashmera by Anadan. “Clashes continue in the villages of al-Zeyara and Beineh, both sides suffered losses.” The YPG said it would continue its “operations against armed gangs” until the Kurdish districts were “cleansed.”

A Liwa al-Tawheed spokesman told Al-Monitor on May 29 that FSA’s Mustafa Sheikh wanted to solve the problem. “It’s a misunderstanding between the two sides and there are some who benefit from the fight. We hope that the fight stops permanently.”

Although the FSA commander announced a cease-fire and some Kurdish civilians who were captured by the FSA were released, fighting continued. Later, he accused the YPG of working with Syrian President Bashar al-Assad.

However, PYD official Alan Semo said it is difficult to reach an agreement with the FSA due to the fact that the agreement was signed by 21 groups. “The Kurdish demand is that we cannot have a cease-fire unless you leave the Kurdish areas and promise not to attack them again.”

Joseph Mardellie, a member of a Kurdish youth group based in Aleppo called the Kurdish Coordination Brotherhood, told Al-Monitor that the talks haven’t succeeded yet because the FSA demands that the YPG hand over those who killed Mahmoud Hafiz Isa.

“The YPG didn’t reply yet. I think this issue is going to be resolved in a few days. Fighting the YPG is not smart — the mutual enemy is the Syrian regime.”

On Friday, the group protested the fighting between the FSA and YPG in Ashrafiya in Aleppo, calling on both sides to end their differences and to “maintain Syrian unity.”

A Kurdish activist from Efrin wondered why the FSA tried to fight the YPG while they are under pressure from Assad’s security forces and the Lebanese Hezbollah, which on June 5 took over Qusair after the FSA retreated from the area after weeks of heavy fighting. “Their friends are massacred in Qusair, and they don’t do anything,” he told Al-Monitor.

According to a report from the private intelligence firm Stratfor, the conflict comes at a bad time for the rebels, “who desperately need to press their attacks against regime forces in Aleppo and Hama to relieve the pressure on their comrades fighting farther north.”

Stratfor predicted that it is most likely that the rebel leadership will try to bring an end to the infighting. “However, eliminating all the clashes is proving difficult, adding yet another obstacle in the rebels' path to victory against the regime.”