Russia Sees Turkey Through Its Own Lens

As long as Russia-Turkey relations stay calm, Moscow has no comment. 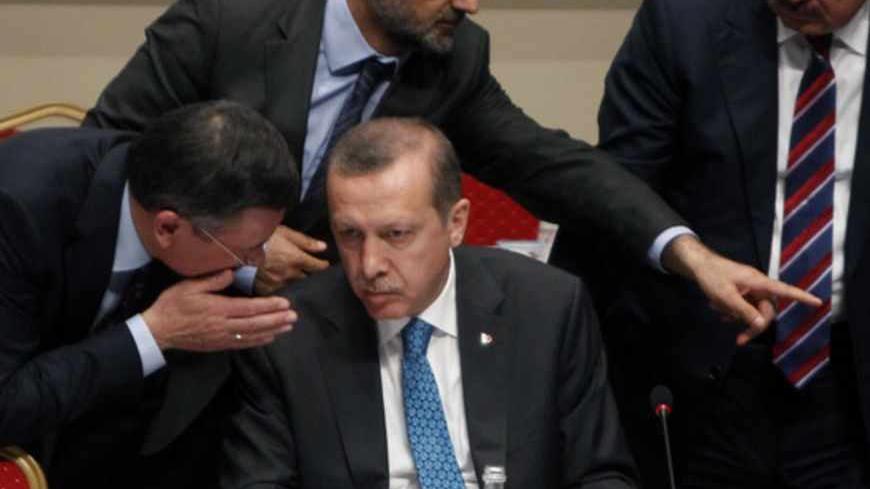 Russia has been observing the unexpected events in Turkey idiosyncratically: through the prism of its own domestic policy. A well-known journalist standing on Taks im Square was the first to tell of how “Dismiss Putin” was among the slogans written on the Square’s asphalt surface, seemingly by a detractor of the Russian government living in Turkey who went the extra mile. A left-leaning female politician who writes scathing op-eds, titled a recent article “Russians, Learn Turkish.” She discerned namely a leftist-oriented socialist revolution in the protests unfolding in Istanbul, even though people with obviously very contrasting views have united against Turkish Prime Minister Recep Tayyip Erdogan. Aleksandr Dugin, a well-known conservative and supporter of what Eurasia stands for, voiced his stance, in what turned out to be the most surprising of them all, as being fundamentally anti-revolutionary, believing the West and NATO incite revolutions aimed at Russia and Eurasianism. Dugin is convinced that the founder of the Turkish Republic, Mustafa Kemal Ataturk, was a true Eurasianist, while Erdogan, in dismantling Ataturk’s legacy, is a minion of the hostile Atlantic community, even though he masks it with Islamic rhetoric.

Dugin writes: “Sooner or later Moscow has to master the geopolitical ABCs and take action according to our fundamental long-term and objective national interests. Thus, we should support a people’s uprising in Turkey. Don’t take it personally, Mr. Erodgan, what goes around, comes around.” His supporters from the Eurasian movement even attempted to picket the Turkish Embassy in Moscow, but the police got in their way.

Incidentally, all these assessments are more a reflection of a domestic ideological war going on within Russia. The Russian government has no grounds in fact to be dissatisfied with how Erdogan has been running the country. First, Moscow loves independent politicians who govern through their own perceptions rather than carry out the agenda of other countries (see “USA”). Erdogan, the leader of the Justice and Development Party, does not exactly see eye to eye with the United States, as he presided over Ankara’s refusing to help Washington organize the invasion of Iraq and began to push for an independent platform in the Near and Middle East while remaining a member of NATO. He decisively eradicated the military, traditionally an advocate of pro-Western and pro-American sentiment, from Turkish politics. Simultaneously, Turkey never openly challenged the United States, and over the past 12 to 18 months has shifted back to more loyal relations with the Americans after having become bogged down in the Arab Spring and, especially, the Syrian conflict. It is not hard to figure out: Erdogan sensed that he was exposed on all fronts, and relying on the strongest country in the world was absolutely necessary.

Russia, cynically speaking, was happy with the scale of Erdogan’s ambitions, especially when it became clear that Ankara was biting off more than it could chew. The further Turkey gets entangled in the intricacies of its new Arab policy, the less energy it will have left over for other areas where Ankara’s interests could clash with those of Moscow: the Caucasus and the Balkans. Moreover, Turkey, in taking a stance on Syria that is opposite to Russia’s, is doing everything it can to distance this issue from its other relations with Russia. A perfect example of this took place last year, when a Syrian commercial flight from Moscow was forced to land in Turkey, where it was discovered to be carrying freight that, at the very least, could be used for more than one purpose.

Instead of the expected uproar after sharp words were initially exchanged, the talk in public was dropped and the issue was passed over to closed-off political and diplomatic channels to be dealt with. Neither side wanted to use the incident as an excuse for confrontation, although that is what it was.

This view, however, reflects self-perception, which again has to flatter Moscow. Russian and Turkish relations have been very good ever since 2000, economic interests are growing and visa regulations have been annulled completely. Both countries’ standings, historically tied to Europe but not perceiving the European Union as inalienable parts of the cultural and political arena of modern Europe, are also becoming closer. Finally, Erdogan and Putin have taken a liking to each other on a personal level, because they are in many ways similar, including in that they both believe in personal power more than institutions. It goes without saying that Turkey is not willing to handle all issues that Russia sees as important in the latter’s favor: Turkey and Russia are not allies and are unlikely to be, while their objective interests often do not coincide. Therefore, Turkey’s aspiring not to inflate this discrepancy is enough.

Ergodan is conducting his own game, believing that Turkey is capable of playing in the big leagues. Here is where we get the request for Russian President Vladimir Putin to think about accepting Turkey into the Shanghai Cooperation Organization (SCO), which he mentioned himself as prime minister during an interview last year. This is hardly possible: Turkey borders a region that falls within the SCO’s chief interests, is a member of a SCO-hostile alliance and has long-established relations with Uighur organizations that support their fellow tribesmen’s fight for self-determination in China.

Overall, though, we do not have any grounds to be happy over Erdogan’s problems. How long he is able to hold on as Turkish prime minister and how strong he will be after this current crisis does not of course depend on Russia. What should we be ready for if Erdogan’s more than 10 years in power, as his critics claim, in fact are coming to an end?

Ever since the Justice and Development Party took control, Turkey has made a fairly serious turn away from its previous anchor of secular nationalism, which made up the essence of Ataturk’s ideology, toward a much more complex model. The consistent strengthening of Islam’s role in the country’s life was accompanied by European-like measures to liberalize legislation (Erdogan made a decisive attempt at the beginning of his time as prime minister at becoming part of the European Union), easing the government’s policy toward ethnic minorities, suppressing the military’s unlimited power and removing the bureaucracy from the economy. The less-advanced majority served as the base for Ergodan and his party, while the urban, Westernized portion of society unenthusiastically observed how Islam was crawling its way in, although the country’s fast development served as the government’s trump card. Erdogan’s stiffening, authoritarian ambitions, aspiration for one-man decision-making, and his foreign political blunders, which gave Turkey the opposite of Ergodan’s promised auspicious foreign environment, proved to be fatal. Having intended to become president next year, Erdogan’s personal stance has taken a hit; however, this hardly means that it is possible to turn back the clock.

Authoritarian regimes where the army serves as the regulator are being shed all across the Near East. Turkey blazed the trail, followed by Egypt and Yemen. Erdogan’s initial bad luck may set the establishment straight, but it will not revive Ataturk’s model. The role of Islam is growing ubiquitously, and although Turkey has formidable contingents that have a stake in preserving the secular state, the general trend is not in their favor. It is unlikely that Ataturk republicans will retake power, and likely that adjustments will be made to the reigning ideology, which has been tripped up by the rejection of the prime minister’s leadership ambitions rather than by the essence.

Russia and Turkey are two very large countries that have traditionally fought within themselves domestically to understand whether they are a part of Europe or not. Today, as Europe encounters serious hardships and ceases to be the center of the world, both countries stand to look for their own path, one that does not include Europe as a benchmark or guideline. It will be very interesting to see which path they will take in the end.