The Turkish president’s foreign trips are widely seen as a way of boosting his image at home. 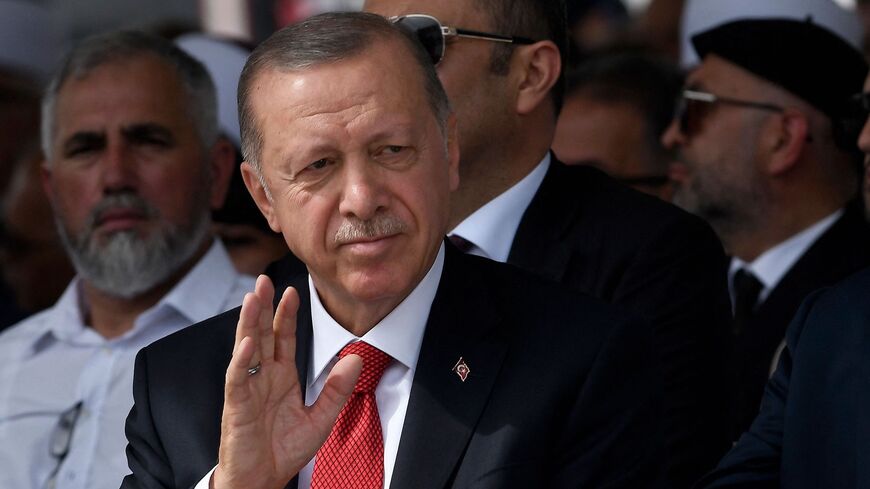 Turkish President Recep Tayyip Erdogan greets assembled believers and his supporters at the inauguration of a new mosque and Islamic center named after him in Sisak, Croatia, Sept. 8, 2022. - DENIS LOVROVIC/AFP via Getty Images

Erdogan’s foreign visits are a key opportunity for the president to parade his credentials as an important world figure — an approach advisers hope will boost his image among voters at home.

Images carried by Turkey’s pro-government media seek to underline this message. A photograph of him chatting with fellow leaders including Russia’s Vladimir Putin, Ilhan Aliyev of Azerbaijan and Belarus’s Aleksandr Lukashenko at the Shanghai Cooperation Organization (SCO) summit in Uzbekistan’s capital Samarkand was headlined “Leaders’ eyes on President Erdogan” across many Turkish newspapers.

Turkey has been a “dialogue partner” to the SCO — dubbed a “dictators’ club” by critics over its authoritarian membership — since 2012. Erdogan told reporters that Turkey was aiming to join the organization.

After the SCO’s two-day meeting, Erdogan jetted to New York Saturday. The timetable meant the president did not attend the week’s most high-profile international event — Monday’s funeral of Queen Elizabeth II in London.

In his place, Erdogan sent Foreign Minister Mevlut Cavusoglu, who later met up with the Turkish delegation in New York.

Questioning why Erdogan — who met the queen at least twice during his two-decade rule — would spurn the chance to share the limelight with hundreds of world leaders, some pointed to Britain’s restrictions on VIP guests, including limits to the size of their entourages. The president is usually accompanied by a large security detail when traveling in Turkey or abroad.

“Does being on the same level as other leaders not fit the image of the ‘world leader’ that his fans have been expressing?” asked veteran journalist Murat Yetkin. “Or was there another governmental task somewhere else that has more strategic importance for Turkey’s interests?”

Erdogan spent part of the weekend strolling through New York’s Central Park, accompanied by Turkey’s ambassadors to the United Sates and United Nations. In a video released by his office, Erdogan greeted New Yorkers and tourists and even attempted to persuade one man clutching a cigarette to give up smoking.

In Tuesday’s address to the General Assembly, Erdogan touched on a wide range of topics including reform of the UN Security Council, the Israel-Palestine conflict, the recent outbreak of fighting between Armenia and Azerbaijan, Turkey’s struggle against terrorism, tensions with Greece and the war in Ukraine.

“Together, we need to find a reasonably practical diplomatic solution that will give both sides a dignified way out of the crisis,” he said of Russia’s invasion of Ukraine. His remarks raised eyebrows for seeming to gloss over Russian war crimes.

Referring to his “very extensive discussions” with Putin in Samarkand, Erdogan said he had seen signs the Russian leader is “willing to end this as soon as possible.” A day later Putin announced the mobilization of further troops and referenda in occupied areas on joining Russia.

Giray Sadik, chair of Ankara Yildirim Beyazit University’s international relations department, said Erdogan was leading the way to bring an end to the war, explaining, “The word ‘dignified’ is important to have a sustainable peace in the region, not only for Russia and Ukraine but also for Black Sea security and neighboring countries so it can help regional stability.”

Following his speech, Erdogan spent much of his time welcoming leaders to the Turkevi, or Turkish House, a skyscraper in Manhattan. The most notable guest was Israeli Prime Minister Yair Lapid for the first face-to-face talks between leaders of the countries since 2008.

Relations between Turkey and Israel have suffered over the Palestinian cause and other issues but warmed in recent months as Ankara sought to reset ties with regional rivals. Lapid’s office said the talks focused on energy and intelligence sharing.

After meeting US senators Lindsey Graham and Chris Coons, Erdogan said he had received “positive” feedback on potential support for the sale of F-16 fighter jets to Turkey, which has asked to buy 40 F-16 fighters and nearly 80 modernization kits for its existing warplanes.

Ankara’s acquisition of Russian-made defense missile systems in 2019 led to US sanctions and Turkey’s removal from the F-35 fighter jet program. The US Congress has remained reluctant to authorize further defense sales to Ankara.

However, a meeting with US President Joe Biden seems unlikely to happen during Erdogan’s New York trip. The leaders met at a NATO summit in Madrid in June, when Turkey’s block on Finland and Sweden joining the alliance was top of the agenda.

Asked if he would meet Biden, Erdogan said he will be attending a reception to be hosted by the US leader. No formal meeting is presently on the presidents' official schedules.