Is Erdogan giving up on EU aspirations?

A proposal to join the Russian- and Chinese-led Shanghai Cooperation Organization gets lukewarm reception, even among Turkish Islamists. 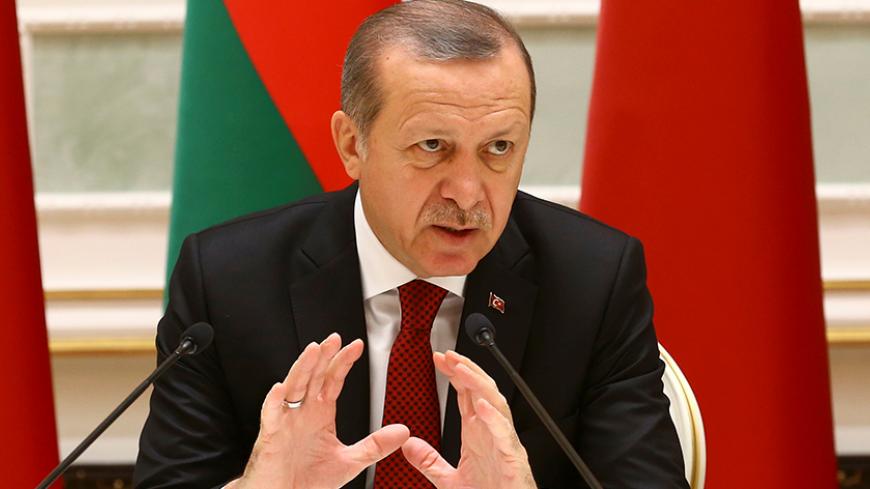 President Recep Tayyip Erdogan has revived his pet topic of joining the Shanghai Cooperation Organization (SCO) in place of the European Union. His call comes at a time when Turkey’s ties with the West are at an all-time low because of Ankara’s refusal to meet Western standards of democracy, veering toward authoritarian rule instead.

Europe, in turn, is reluctant to clamp down on political supporters or alleged members of the so-called Fethullah Gulen Terror Organization, the group accused by Ankara of planning the failed coup on July 15. The same reluctance is seen with regard to political supporters of the Kurdistan Workers Party (PKK), despite the fact that the EU has also listed the PKK as a terrorist organization.

“[Turkey] shouldn’t say 'I’m for the EU no matter what.' … For example, why shouldn’t Turkey be part of the Shanghai 5,” Erdogan said to reporters while flying back from a visit to Uzbekistan over the weekend. He was referring to the SCO by an alternative name.

Erdogan said he had broached the subject with Russian President Vladimir Putin and President Nursultan Nazarbayev of Kazakhstan. “If Turkey takes its place in the Shanghai 5, this will enable it to act with greater ease,” Erdogan said.

There were cautiously encouraging, albeit qualified, responses from Russia and China to Erdogan. Speaking diplomatically, Aleksey Pushkov, the chairman of the Duma’s Foreign Affairs Committee, said in a Tweet, “Membership in the SCO would be a logical step for Erdogan” because “unlike the EU, SCO members are totally independent.” Pushkov added, however, that “the SCO is different than the EU, which it couldn’t replace.”

Chinese Foreign Ministry spokesperson Geng Shuang said they attached great importance to Turkey's wish to strengthen its ties with the SCO. "We are willing, together with other members of the [SCO] and in accordance with the rules of its legal documents, to seriously study [Erdogan’s call] on the basis of consensus consultation," Geng said.

Erdogan’s desire to join the SCO dates back to 2013, when he first “joked” — as he himself put it at the time — about the subject with Putin, asking Russia to help Turkey join this organization so that Ankara could end its engagement with the EU.

His approach to the subject since then, however, suggests he is not joking.

Meanwhile, the apparent “dialogue of the deaf” between Turkey and the EU has resulted in calls in Europe to end EU membership talks with Ankara and calls in Turkey — also supported by Erdogan — for a final decision to be made regarding Ankara’s EU membership bid, and even to hold a referendum if necessary.

Turkey is currently a “dialogue partner” of the SCO, which is dominated by Russia and China. The other members are Kazakhstan, Kyrgyzstan, Tajikistan and Uzbekistan. India and Pakistan are currently undergoing accession processes. Iran also wants to join.

The SCO is defined as “a Eurasian political, economic and military organization.” Joining it would mean a radical change of sides for Turkey. If it were to happen, it would also have serious regional and global ramifications, since Ankara would most probably have to not only give up on its EU bid, but also its NATO membership.

None of the SCO members, except prospective member India and to a lesser extent Pakistan, are true democracies. They are mostly governed by one-man-rule, authoritarian systems. Critics claim this is what attracts Erdogan, since there is no criticism from the SCO about the state of democracy and human rights in Turkey.

Erdogan supporters nevertheless appear uncertain about his call to join the SCO. Resul Tosun, an Islamist commentator for the pro-government daily Star, says Erdogan’s call “is a response to Westerners in a language they understand,” showing them that Turkey has alternatives.

“Of course we know very well that the United States, the EU and the SCO are not friends of Turkey in the true sense of the word,” Tosun said in his column, indicating in this way that there are limits to what Ankara can expect from the Eurasian grouping.

Ahmet Tasgetiren, another Islamist commentator who also writes for Star, is more forthright. He points out that Erdogan brings this topic up whenever Turkey’s ties with the West are undergoing turbulence. “When looked at it in this context, the president’s call appears as a reaction to the fact that expectations from the West are not being fulfilled,” Tasgetiren argued in his column.

Despite being an Erdogan supporter, he felt the need to question this strategy, asking if there wasn’t a better way other than talking about Turkey’s SCO membership to convince Europe of Turkey’s vital role for the West. Tasgetiren said Ankara’s ties with countries like Russia and Iran are prone to blowing hot and cold, and asked what Turkey would do if the SCO opted for policies that Turkey can’t accept.

What concerns Islamists is that the SCO is a defense organization that is also committed to combating Islamic fundamentalism. Ankara and Moscow are already at odds over the fate of Crimean Tatars and Russia’s policies toward other Muslim communities within its borders.

Ankara and Beijing, for their parts, are at odds over the fate of the Uighurs, a Muslim and ethnically Turkic minority in China’s autonomous Xinjiang province who complain of Chinese repression.

Ankara remains largely silent on these issues for the sake of its pragmatic ties with Russia and China. Appearing to support Russian and Chinese pressures on its Muslim minorities or ever remaining silent — especially in the event of serious uprisings among these minorities — however, would seriously agitate Erdogan’s Islamist support base.

Retired Ambassador Unal Cevikoz, who as a NATO officer opened the alliance’s Information Office in Moscow in 1994 and who currently has a column in daily Hurriyet, remains skeptical about SCO membership for Turkey.

“This organization has not exactly been welcoming for Turkey. Iran, which also wants membership, has been given observer status, while Turkey is only a dialogue partner, which is a lesser status,” Cevikoz told Al-Monitor.

Cevikoz also believes that Erdogan’s call for SCO membership is designed to express dissatisfaction with the West. He added, however, that this “leaves Turkey looking unpredictable and untrustworthy in the eyes of its Western allies.”

Cevikoz said the SCO cannot be an alternative to NATO and adds that joining it would also place Turkey in a “lesser league of nations” since none of the SCO’s present members are true democracies.

The government remains largely silent over Erdogan’s call, which some argue reflects unease over this proposal. Deputy Prime Minister and government spokesman Numan Kurtulmus employed a cautious tone during his regular press conference Nov. 21. He said developing ties with the SCO did not mean that Turkey would have to end its ties with other countries.

Kurtulmus was of course aware that Turkey was hosting NATO’s annual Parliamentary Assembly in Istanbul as he was speaking. Much was said during the assembly, which was also attended by NATO Secretary-General Jens Stoltenberg, about Turkey’s pivotal role in the Western alliance.

If Erdogan, who also addressed NATO’s Parliamentary Assembly, truly dreams of seeing Turkey in the SCO, this looks more likely to remain a pipe dream due to the sheer force of circumstances.