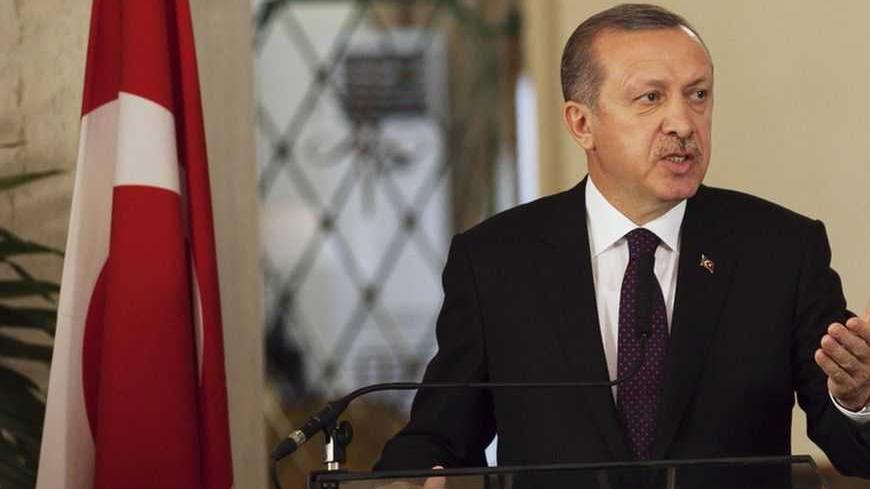 Turkish Prime Minister first announced his intention to take his country into the Shangai Cooperation Organization [SCO], otherwise knows as the Shangai Five, in an interview on July 25 with a Turkish TV channel close to his party. Erdogan then said: “I joked with Putin, ‘Time to time you joke with us and ask what we are doing with EU. Now it is my turn to joke. Come, accept us into Shangai Five and we will reconsider EU.’”

At the time Erdogan wasn’t taken too seriously because he said he was joking with Putin.

But on Jan. 25, on the same TV channel, when he advocated Turkey’s membership in the SCO, Turkish public opinion took him seriously. This time he wasn’t joking. His intention was serious.

This what Erdogan said this time around: "EU wants to forget us but it can’t. It is reluctant. We will be more comfortable if it says so. Instead of stalling us, let it say so and we will go our own way. … Of course, when this [EU] affair is not proceeding well, as the prime minister of 75 million you start looking around for alternatives. This is what I told Mr. Putin the other day, ‘Take us into Shangai Five and we will forget the EU.’ Take us into Shangai Five and we will say goodbye to EU and leave. What is the point of this stalling?"

To a question whether SCO is the alternative of the European Union, Turkish Prime Minister replied: "Shangai Five is better, stronger.”

There may be those who at first glance might get the impression that Erdogan wasn’t serious and even that he may be trying to frighten the EU with “SCO blackmail” to speed up the accession process.

This impression is out of place because Erdogan is serious. My suggestion to those who may think that Erdogan’s SCO preference is not serious is not to dismiss as frivolous the arbitrary rule mentality that prevails in Turkey. The SCO target is serious and is compatible with the style of governance and arbitrary rule.

How to do we know? Turkey applied tp join the SCO as a guest member in 2007, 2009 and 2010 but did not get a favorable response. Take note of the first year of application. That is the year that followed December 2006, when EU suspended accession negotiations with Turkey on grounds of its not fulfilling the obligations of the Additional Protocol with the EU and not opening its air and seaports to the Greek Cypriot sector that it recognizes as the Republic of Cyprus.

This wasn’t a coincidence.

Then, on March 23, 2011, Turkey officially applied to SCO for “Dialogue Partnership Status." This application was approved by the Council of Heads of State Summit in Beijing on June 6-7. Now, following Belarus and Sri Lanka, Turkey is awaiting the signing of the memorandum of understanding between the SCO and Turkey as the third “dialogue partner.”

The SCO is an organization with six member countries ruled by totalitarian and authoritarian regimes: China, Russian Federation, Kyrgyzstan, Tajikistan, Kazakhstan and Uzbekistan. It was set up to preserve stability and for the joint struggle against cross-border threats of terrorism, extremism and separatism. It also has a strategic goal of ending the monopoly of the U.S. dollar and Euro currency in international banking transactions.

Of course, SCO can’t be an alternative of EU for Turkey. It is neither stronger nor better than the EU to provide the aspirations of the Turkish people for democracy and welfare.

The EU criteria demand democracy, human rights, union rights, minority rights, gender equality, equitable distribution of income, participation and pluralism for Turkey. SCO as a union of countries ruled by dictators and autocrats will not demand any of those criteria for joining.

Moreover Turkey’s SCO membership cannot contribute to stability and security of eastern Mediterranean. As a SCO member Turkey cannot claim to be model for the Middle East.

According to the latest report “Freedom in the World 2013” of the Washington, D.C.-based freedom rating agency Freedom House, Turkey identified as a "partly free country” in the fields of political rights and individual freedoms lag far behind other EU countries. Even the worst “free” Rumania and Bulgaria are far ahead of Turkey in these fields.

But, Turkey is in a better position than all SCO countries. According to Freedom House, five out of six SCO members are not free countries. Kyrgyzstan, the only SCO member considered as “partly free” is behind Turkey.

Turkey, which can’t be an EU member with restricted rights and freedoms it allows its citizens, is actually a champion of democracy and freedom when compared to SCO members.

As such, one reaches the conclusion that the political culture of a leader who can compare EU and SCO and say that one is the alternative of the other is bereft of democratic values that will ensure freedoms and happiness of its people.

The comparison made is also out of place. For Turkey to become a SCO member, before forgetting EU it has to leave NATO because those two organizations are alternatives of each other.

The SCO, which was on the hidden agenda of the AKP Turkey, is now an open agenda item. Turkey’s Western allies and the free world have to take Erdogan’s jokes seriously.