Observers wonder whether an offer of full membership in the Shanghai Cooperation Organization would lure Turkey away from NATO and the country's "suffering" at the hands of the European Union. 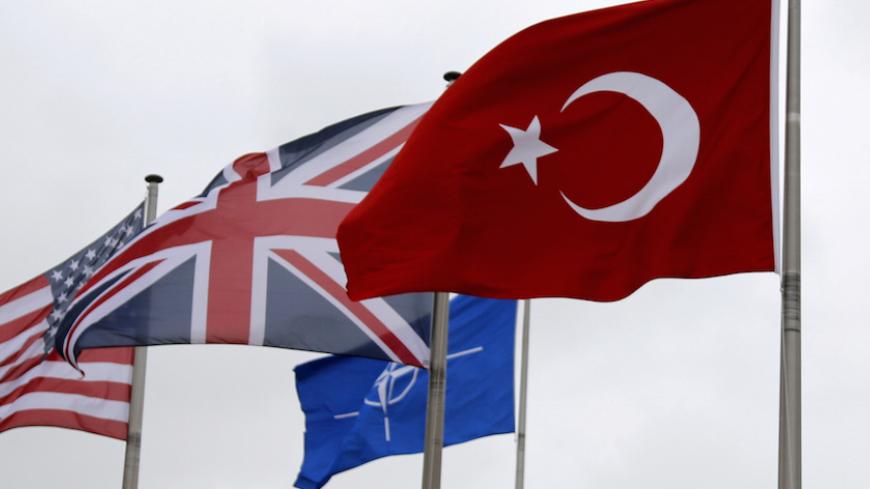 A Turkish flag (R) flies among other flags of NATO members during the North Atlantic Council at NATO headquarters in Brussels, July 28, 2015. - REUTERS/Francois Lenoir

In 2013, Recep Tayyip Erdogan, then Turkey's prime minister, surprised many with his statement about the Shanghai Cooperation Organization (SCO). Addressing Russian President Vladimir Putin, he said, "Get us out of this suffering [of trying to join the European Union]. We are willing to finalize a free trade agreement with Eurasian countries. I talked about the Shanghai Cooperation Organization with [you] before. We care about it."

At that time, his statement sounded like a joke, as he himself described it, or perhaps a provocation — a message to Brussels meaning, "Look, we don't need you, we have other options." Few people in Turkey or Russia took it seriously.

In November 2016, President Erdogan again touched upon the question of Turkey's SCO membership. "[Turkey] shouldn’t say, 'I’m for the EU no matter what.' … For example, why shouldn’t Turkey be part of the Shanghai Five [SCO]?” Erdogan told reporters on his return flight from SCO member state Uzbekistan.

This time his words weren't necessarily viewed as a joke, as many things have changed since Erdogan's first statement. First, Turkey's relations with the West have been seriously damaged since a failed coup in July and the subsequent mass arrests in the country. Second, the EU has become less attractive to Turkey. The EU itself has faced a number of problems, including Britain's departure vote (Brexit), the refugee crisis, the rise of anti-Islamic and anti-immigration sentiments, and the surge of far-right movements. Third, Russia's relations with the West have also been dented by the Ukraine crisis and subsequent economic sanctions, making many observers talk of a new Cold War.

Unsurprisingly, all of that pushed Moscow and Ankara to strengthen their relations with non-Western partners and between each other, sparking talks about Turkey's potential SCO membership. The “Shanghai Five” (Russia, China, Kazakhstan, Kyrgyzstan and Tajikistan) was founded in 1996. It was renamed the Shanghai Cooperation Organization after Uzbekistan joined the group in 2001. Later, SCO observer status was granted to Mongolia, Iran, Belarus and Afghanistan. India and Pakistan signed accession agreements in June 2016 and are to become members this year. Turkey joined the SCO as a “dialogue partner” in 2012.

Fyodor Lukyanov, the editor-in-chief of Russia in Global Affairs, says the SCO's importance is rapidly increasing in the world. He believes the main unifying characteristic of the organization is its opposition to intervening in members' internal politics. Many in Turkey believe that this absence of criticism is what Turkish authorities find most attractive about the SCO. Some experts, though, stress the economic benefits for Turkey.

Russia regards Turkey's potential full membership in the SCO rather positively for a number of reasons. First, Moscow wants to deepen its relations with Ankara and, more than that, expects Turkey’s SCO membership to provide additional leverage over the country’s policies. Since the July coup attempt in Turkey, Russian experts have started to talk more often about a shift in Ankara's foreign policy from the West to the East. Turkish foreign policy has become one of the most discussed political topics on Russian state-run TV channels. Vladimir Zhirinovsky, a Turkologist by training and now a famous Russian politician and leader of the Liberal Democrats (the second-largest party faction in the State Duma), predicts Turkey inevitably will shift even more toward Eurasia and the Middle East, and could wind up leaving NATO.

The second reason is economic. Turkey is an important energy hub, connecting Eurasia with Europe. SCO countries could deepen Turkey's economic ties and help improve energy cooperation. "Turkey was elected to chair the Shanghai Cooperation Organization Energy Club this year, being the first non-SCO country to do so," Esref Soysal, a deputy SCO representative for Turkey, told Al-Monitor. "This is the main message sent to us by Moscow. This is how Russians view Ankara's membership in the SCO."

Third, more close cooperation with Turkey in the security sphere is beneficial to Russia. Both Moscow and Ankara face similar security threats in the region, such as terrorism and Islamist extremism.

Russian military experts, however, are skeptical about Turkey's SCO membership. One such expert, a retired colonel and military journalist, told Al-Monitor on condition of anonymity that without leaving NATO, Turkey can't join the SCO. "The SCO was established as a regional organization, which concentrates, first of all, on security threats such as extremism, terrorism, security and close military cooperation. It is just impossible that a NATO country will become an SCO member," he said.

In Turkey, however, membership in the SCO is hardly viewed as an alternative to NATO or the EU.

"Turkey, due to its geography and culture, is in Asia and in Europe, similar to Russia. Thus, Shanghai is not an alternative to the EU," Turkish Prime Minister Binali Yildirim told the media during a December trip to Russia. "We are not using [the SCO] to scare the EU. [But] Turkey cannot disregard the threats and opportunities it faces. We do not have the luxury to say, 'The EU is our only option and we will be there whenever it wants us to be there."

Soysal told Al-Monitor, "I don't see why Turkey [would have] to leave NATO. The SCO was not established as an alternative to NATO."

Russia has viewed the SCO as more of a security and political organization than an economic one. This seriously diminishes the membership chances for a NATO state in the SCO, even though Moscow welcomes Ankara’s efforts to join. Liberal Democrat leader Zhirinovsky, during his November visit to Turkey, said Erdogan personally asked him to help with Turkey’s efforts to join the SCO and said there is a possibility Turkey will leave NATO.

It's interesting to speculate whether Erdogan was joking this time.