Are Turks Being Shanghaied?

Turks may wonder what is the rationale for Turkey joining the Shanghai Cooperation Organization (SCO), given its membership in NATO and bid for EU membership. 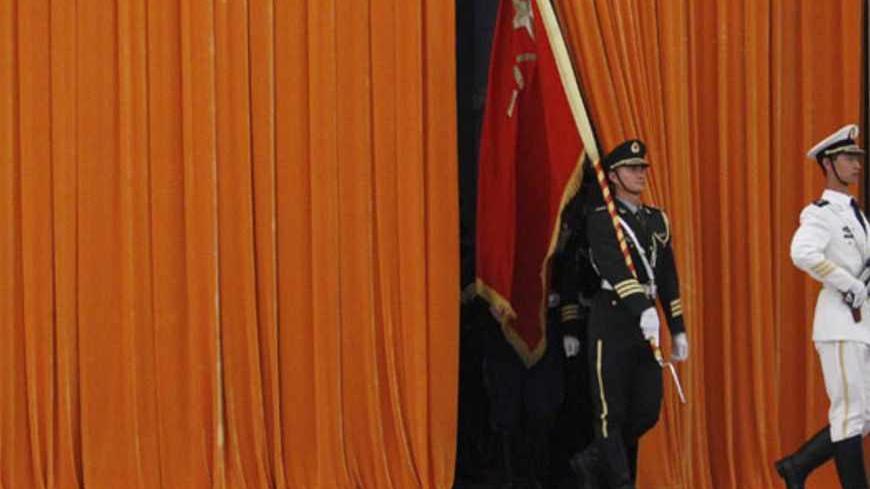 Honor guards walk out from behind a curtain, before the start of an official welcoming ceremony for the Shanghai Cooperation Organization (SCO) summit, at the Great Hall of the People in Beijing, June 7, 2012. - REUTERS/David Gray

After waiting for two years, Turkey finally became a dialogue partner of the Shanghai Cooperation Organization (SCO) last week, thus moving a step closer to fulfilling a desire by Prime Minister Recep Tayyip Erdogan to one day becoming a full member of what is predominantly a security bloc — that some argue is not only a counterbalance to NATO but also provides Ankara with an alternative to its stalled European Union membership bid.

Foreign Minister Ahmet Davutoglu hailed the development as a “historic day,” adding, "With this choice, Turkey is declaring that our destiny is the same as the destiny of the Shanghai Cooperation Organization countries." He was speaking in Almaty, the commercial capital of Kazakhstan, during a joint press conference with SCO Secretary-General Dmitry Mezentsev on April 26, after signing the memorandum of understanding making Turkey’s dialogue partnership official.

"Turkey will be part of a family, which is composed of the countries which lived together not for centuries — for millennia," Davutoglu added, according to Reuters, going on to say, "This is the beginning of a long way, walking together, hand in hand and shoulder to shoulder."

Erdogan came out last summer suggesting that if Turkey was admitted to the SCO it could consider giving up on its EU bid. Answering questions for a panel of journalists on July 25, 2012, on Kanal 24, a pro-government channel, he said that he had jested about the topic with Russian President Vladimir Putin, whose country, together with China, dominates the SCO.

“Jokingly, I said to Putin 'you goad us from time to time by saying what business do you have in the EU? So let me goad you this time. Admit us into the Shanghai Five, and we will review our position on the EU.'”

Erdogan, who was referring to the SCO by its popular name of the “Shanghai Five,” despite its six members today, has also been suggesting that this organization provides a more natural environment for Turkey than Europe. Three of the SCO’s six members, namely Kazakhstan, Kyrgyzstan and Uzbekistan, are predominantly Muslim and share a “Turkic” affinity with Turkey, while another member, Tajikistan, is predominantly Muslim.

Davutoglu’s remark in Almaty suggesting a “shared destiny” with SCO members also carries overtones of this approach. But there are some serious fallacies here that have to be highlighted. Webster’s Dictionary defines the term “to be shanghaied” as “a way of inducing another to do something through force or deceit.”

There is no force in Turkey becoming a dialogue partner of the SCO, of course. There may, however, be some deceit. To start off with, there is already an anomaly in the fact that Turkey is bidding for SCO membership when it has been a member of NATO for over 60 years.

The SCO is generally defined as a security bloc, even though the Declaration on the Establishment of the SCO says its aims include “effective cooperation among the member states in political, economic and trade, scientific and technological, cultural, educational, energy, communications, environment and other fields.”

Article 8 of the declaration, however, indicates that “the SCO sets special store by and makes all necessary efforts to ensure regional security. The member states will cooperate closely to implement the Shanghai Convention on Combating Terrorism, Separatism and Extremism.”

Answering questions for the Anatolian News Agency in the city of Turkistan in Kazakhstan, on Monday [April 29], Davutoglu also underlined the fact that Turkey is the first SCO dialogue partner which is also a NATO member. Seeing no discrepancy in this, he said, “The Cold War is finished. Turkey will not be a slave to the Cold War mentality.”

The problem, however, is that Ankara is already at odds with Moscow and Tehran — who’s observer status in the SCO puts it in a higher position than Turkey in the organization — over strategic issues concerning security. One such issue relates to Turkey allowing the deployment of NATO’s advanced anti-missile defense radars, facing Russia and Iran, in Kurecik near the city of Malatya.

The strong language from Moscow and Tehran concerning this deployment — with promises to counterbalance it by all possible means — is already reminiscent of a “Cold War mentality.” Russian and Iranian suspicions about Turkish intentions increased further when Ankara asked NATO to deploy Patriot anti-missile batteries in Eastern Anatolia against possible missile attacks from Syria.

Russia and Iran continue to believe the Patriots were deployed to protect the Kurecik facility, and therefore are in Turkey for the long haul. As for the Syrian crisis, this is demonstrating the kind of strategic disparity likely to emerge between Ankara and other SCO members on key issues if Turkey were to be a full member of the organization.

Turkey remains angry with Moscow and Tehran for continuing to back Syrian President Bashar al-Assad, while Russia and Iran are angry with Ankara for backing the Syrian armed opposition, which they say is made up of “extremists” and “terrorists.” This brings us back to Article 8 of the declaration and its reference to “combating terrorism, separatism and extremism.”

As a country that has been combating separatist Kurdish terrorism, Turkey has always been keen on fighting “separatism and terrorism.” However, the Turkish understanding of these terms is not always the same as Russia’s and China’s, especially when it relates to developments in regions like Chechnya and the Xingjian Uyghur Autonomous Region.

Both regions have restive populations which are closely related to Turks, and the brutal attempts by Russia and China to suppress Chechen and Uyghur attempts at independence have always been met with public anger in Turkey.

Erdogan himself referred to the Chinese suppression of the rebellion in the Uyghur capital of Urumqi in July 2009 as “savagery,” going on to liken it to “genocide.” Turkey also angered China when it tried, as a non-permanent member, to bring the matter to the UN Security Council, resulting in accusations by Beijing that Ankara was interfering in China’s domestic affairs.

Turks remain equally sensitive about developments in Chechnya today, and are highly critical of the way Russia has put down Chechen uprisings in the past. In other words, Ankara, Moscow and Beijing do not always see eye to eye on who is a “terrorist,” and who is a “separatist.” The deeply differing views Turkey has with Russia and China on Syria provides a current case in point.

The same applies to the Russian and Chinese understanding of “extremism,” an understanding that is also largely shared by other SCO members who are committed to resist this. “Extremism” generally means “Islamism” for them.

The Turkey’s Islamist Gulen movement — which has many followers among Erdogan’s supporters, and whose schools in Uzbekistan and Russia have been hounded and closed, while its followers in Central Asia remain under close scrutiny — knows this well. It is therefore not possible for the Islamist Erdogan government to see eye to eye with SCO members about who is an “extremist.”

Another common feature of SCO members is that they have serious democracy and human rights deficits, a fact that falls contrary to claims by Erdogan to be bringing “advanced democracy” to Turkey. Ankara’s EU perspective has provided important guidelines for Turkey to improve its democracy and its human rights record. The only guidelines emanating from the SCO concern “enforced stability,” rather than democracy, and are seriously out of tune with the Turkish political reality.

Pointing out that the SCO “has a deeply anti-Western DNA,” Daniel Pipes, who is the president of the Philadelphia-based Middle East Forum, and an inveterate opponent of Erdogan and his Islamist Justice and Development Party (AKP), has argued that cozying up to the SCO “fits [Erdogan’s] Islamist impulse to defy the West and to dream of an alternative to it.”

Even allowing for Pipes’ often skewed anti-Islamic views it is true that Erdogan has on many occasions revealed deeply anti-Western sentiments, the most recent example coming after the French intervention in Mali. Anti-Western sentiment also scores political points in Turkey, especially among Islamist grass roots supporters and nationalists of all shades.

One gets the feeling, in light of the facts mentioned above that make a “shared destiny” with the SCO quite difficult for Turkey, that the Turkish public may be being “shanghaied” in this case for political reasons. If, however, this is all being done for the sake of expanding Turkey’s economic options, one can understand that. But with references to “shared destinies,” there appears to be more than that involved here.

Semih İdiz is a contributing writer for Al-Monitor’s Turkey Pulse. A journalist who has been covering diplomacy and foreign-policy issues for major Turkish newspapers for 30 years, his opinion pieces can be followed in the English-language Hurriyet Daily News. He can also be read in the newspaper Taraf. His articles have been published in The Financial Times, The Times of London, Mediterranean Quarterly and Foreign Policy magazine, and he is a frequent contributor to BBC World, VOA, NPR, Deutsche Welle, various Israeli media organizations and Al Jazeera.