President Erdogan’s statement that NATO-member Turkey is targeting membership in the Shanghai club is more geared toward domestic consumption than reality, particularly after a top Russian diplomat said NATO and the SCO are incompatible. 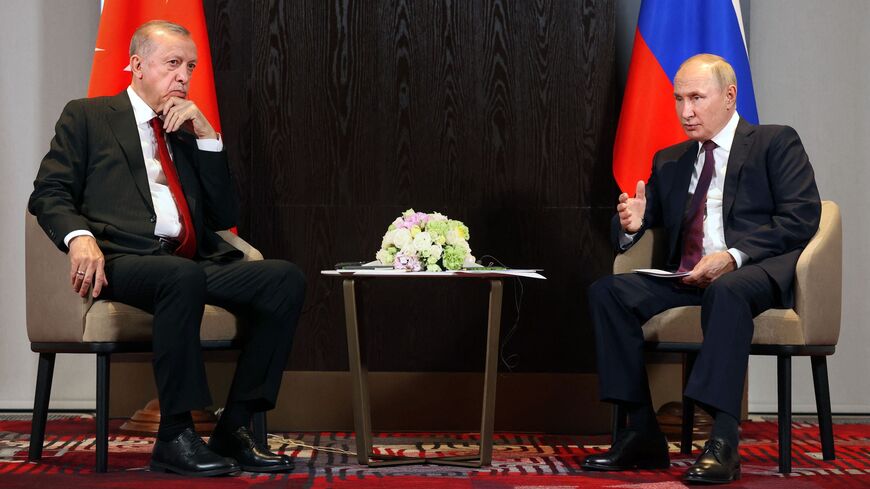 Ahead of his visit to New York to attend the UN General Assembly, Turkish President  Recep Tayyip Erdogan signaled that NATO-member Turkey is targeting membership in the Shanghai Cooperation Organization (SCO), a platform dominated by Russia and China. Once in the United States, Erdogan repeated the same message in an interview with PBS NewsHour Monday. Asked by Judy Woodruff how Turkey could reconcile its possible membership in the SCO (an organization whose members include China, Russia and — as of 2023 — Iran) and NATO, Erdogan replied that Turkey positioned itself as a global — rather than a Western or an Eastern — power. “The European Union has kept us, a strong country, at its gates for 52 years,” he said. “It is natural that we are looking at other alternatives.”

Despite recurrent debates on whether Ankara should — or could — be a member of the SCO, seasoned Turkey-watchers would remember that Erdogan’s road to Shanghai started as a joke. As Al-Monitor reported back in 2013, Erdogan first sounded out the possibility in a TV program on July 25, 2012. “Jokingly, I said to [Russian President Vladimir] Putin, 'You goad us from time to time by saying what business do you have in the EU? So let me goad you this time. Admit us into the Shanghai Five (as the SCO was called when founded in 1996), and we will review our position on the EU,'” Erdogan said.

But when Erdogan repeated the same anecdote six months later, it had become a reality. Erdogan and Ahmet Davutoglu, his then-foreign minister and current political rival, had managed to obtain a dialogue partnership status in the group, which critics refer to as “the dictators’ club” or “Rogue NATO.”

Davutoglu hailed the status as a “historic day,” saying that Turkey has declared its destiny the same as the SCO countries. In 2017, India and Pakistan finished accession and joined Russia, China, Kazakhstan, Kyrgyzstan, Tajikistan and Uzbekistan as full members. Iran is expected to become a member in 2023. Afghanistan and Mongolia have also expressed the intention to become full members. Azerbaijan and Armenia are dialogue partners, and Egypt just signed a memorandum of understanding to become one. Israel might be on the way. Successive enlargements have also changed the organization’s portfolio. The group, which had started as a means to have political exchange between Russia, China and its neighbors, has started addressing infrastructure and economic development, as well as cooperation against terrorism.

Erdogan, who attended the SCO meeting for the first time last week, basked in the glory of informal gatherings and his bilaterals with Putin, Chinese President Xi Jinping and others. The pro-government papers highlighted a snapshot of the Turkish president telling a joke to the attending leaders around a low table to underline Erdogan’s weight in the global arena. “There is no Turk who would not be proud of this photo,” tweeted pro-Erdogan pundit Abdulkadir Selvi.

Erdogan sang the praises of the organization on his way to the United Nations. “The SCO has made significant strides in the areas of security, economy and commerce," Erdogan told journalists, pointing out that the members "generate more than 30% of the GDP, with a total economic size of $20 trillion."

He then added that his aim was to take cooperation between Turkey and the SCO to the next level. “We were invited to Samarkand at the invitation of the host, Shavkat Mirziyoyev. The next step toward the highest level of cooperation will be considered at the meetings in India, which will take up the term-presidency of the organization.”

Asked point-blank by journalists whether the next step was full membership, Erdogan replied, “Yes, this is what we target.”

But a senior Russian diplomat warned that it may not be a smooth ride due to Turkey’s membership in NATO. “Turkey’s accession request would be assessed as soon as it comes,” Bakhtiyor Khakimov, a special SCO envoy of Russian President Vladimir Putin, told Ria Novosti. He said that the criteria included not being part of blocs that are “hostile or directed against members of the SCO,” noting that Turkey is a member of NATO, which “declared Russia not just an adversary, but enemy No. 1.”

“Turkey cannot become a member of the [SCO] while it is a member of NATO, and the country, no matter who is in government, would never leave NATO. We have been looking for a formula for a decade under the command of three different foreign ministers, but we have not found one,” a former diplomat familiar with the file told Al-Monitor on condition of anonymity. “If Turkey makes an application, it is not clear how China — which has a problem regarding Turkey’s support of Uyghurs — or even Russia would react.”

Unal Cevikoz, a former diplomat and the deputy chairman responsible for external affairs of the main opposition Republican People’s Party (CHP), maintained that while Turkey’s role as dialogue partner in the SCO was positive, anything beyond that could be counterproductive. “Given the Western world’s outlook to Russia — particularly after its invasion of Russia — and toward China, you cannot claim to be a member of both organizations, saying that it is an equilibrium policy,” he said. “Membership would be a step in the wrong direction, particularly when we are going through such a critical time in our relationship with the Western world.”

“As Erdogan is the sole decision-maker in foreign policy, most everything in Turkey’s external policy-making seems to be geared toward keeping Erdogan in power,” Serhat Guvenc, professor of International Relations at Kadir Has University, told Medyascope. “His pragmatism is sometimes referred to as equilibrium policy, but the fact remains that some foreign policy decisions are mutually exclusive,” he said, adding that membership to SCO while trying to remain a member of NATO was one.

Zeynep Gurcanli, a veteran foreign policy columnist, is blunter. “Erdogan’s statement has two objectives. With the looming elections, [he] is trying to use the nationalist card to capitalize on the anti-Western sentiment in Turkey. The second is that the president, unable to get the support he wants from the USA and European allies, is trying to give the message that he can turn the country’s direction to elsewhere,” she wrote in Dunya Daily.