Is Turkey all talk, or will it split from the West, NATO?

Ankara is sending out plenty of signals that it might leave the West and head east toward Russia and China. 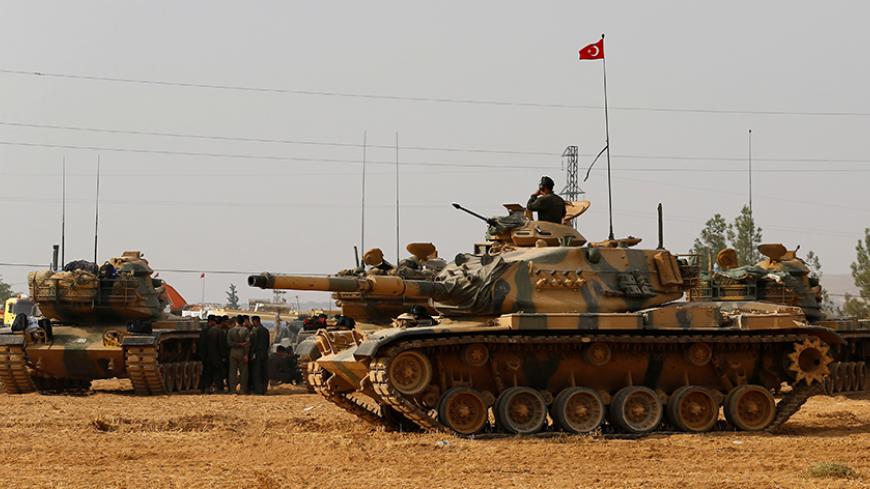 Turkish army tanks and military personnel are stationed in Karkamis on the Turkish-Syrian border in the southeastern Gaziantep province, Turkey, Aug. 25, 2016. - REUTERS/Umit Bektas

People nowadays seriously wonder if Turkey is about to split from the West. Is Turkey’s opening up to the East, which became more noticeable after the July 15 coup attempt, a passing reaction to the lack of interest shown by the United States and Europe, or is it Ankara’s more independent and nonaligned policy choice? Will the honeymoon between Ankara and Moscow in recent weeks become a long-term alliance?

The answers to these questions can be found among Turkey’s military-security indicators, rather than political and economic indicators. The country’s perception of threats and allies has more bearings on its long-term strategic choices. After President Recep Tayyip Erdogan’s recent comment that if Turkey takes its place in the Shanghai Cooperation Organization (SCO), this “will allow it to act more freely,” there has been a sharp rise in speculation that Turkey may leave the Western security bloc.

According to Gen. Leonid Ivashov, the director of Russia’s Geopolitical Studies Academy, Turkey’s turn toward the SCO is the right move. He told the Russian government-run Sputnik news agency that as Ankara starts its accession process to the SCO, it should also initiate the process to quit NATO. Ivashov, who noted that US President-elect Donald Trump has labeled NATO an obsolete institution, said Turkey has to make its calculations and decide accordingly.

Countering Ivashov’s hard-line comments is NATO Secretary-General Jens Stoltenberg, who was in Istanbul for the NATO Parliamentarians Assembly on Nov. 19 and had a long meeting with Erdogan. Referring to Erdogan’s remark that Turkey could join the SCO, Stoltenberg said, “I am sure Turkey will do nothing that could impair the concept of joint defense … and NATO unity.”

The NATO assembly in Istanbul focused on issues such as US-NATO relations in the Trump era, the future of the alliance, Turkey’s preference for Russia’s S400 high-altitude air and missile defense systems, the status of Turkish officers working for NATO who don’t want to return to Turkey and are seeking asylum, whether Turkey will appoint new officers for NATO posts, and the formation of the NATO training force in the Black Sea.

Professor Mustafa Kibaroglu, a leading researcher on NATO affairs at MEF University in Istanbul, told Al-Monitor, “No matter who says what, I don’t think Turkey will leave NATO in the foreseeable future. Anyway, SCO doesn’t have the structure that can be an alternative to NATO. Moreover, I am not so sure that SCO wants Turkey’s membership.”

Defense industry commentator Arda Mevlutoglu thinks Ankara’s rhetoric and political maneuvers in recent times amount to moves in a diplomatic chess game being played with the West following the July 15 coup attempt. “That is why I don’t think Turkish-Russian military relations will reach the level of an alliance. We know that Turkey’s military relations with Russia, especially in defense procurements, have been very limited."

Further complicating defense cooperation between the two are "Turkey’s NATO membership; the Ukraine crisis and the Crimea annexation, which brought Russian-Western relations to the point of rupture; and mutual recriminations between NATO and Russia," Mevlutoglu told Al-Monitor.

For Mevlutoglu, one of the most interesting outcomes of the improvement in Turkish-Russian relations has been Turkey’s interest in the Russian air defense system S-400 (NATO reporting name: SA-21 Grumble).

Defense industry researcher Turan Oguz thinks the most important issue is the deepening crisis of confidence between Turkey and the West, which is very perceptible in defense-security spheres. Turkey has been extremely agitated to the extent of issuing threats to the United States and the West on issues such as armed drones, long-range air and missile defense systems, advanced cameras and engine technology. If there is a defense-security split, "the first cause of that will be the refusal of our Western allies to understand Turkey and its concerns,” Oguz told Al-Monitor.

Can the current Russian-Turkish honeymoon become an actual alliance? According to political science doctoral student Kerim Has of Moscow State University, the answer is no. Has believes Russia wants to use its relations with Turkey as an instrument.

“Russia believes that state structures and borders in the Middle East are bound to change, that non-state actors will have more prominent roles and, as such, a turbulent period during which security alliances will be redesigned is in the offing. From this point of view, Russia’s intention to open new spheres of influence in the region is understandable,” he told Al-Monitor.

He thinks that Russia hopes Trump's incoming administration will initiate a Brexit-like process for NATO. Such an unplanned course for the European Union and NATO would no doubt please Russia. “For such an unpredictable process for the EU and NATO, Russia needs Turkey,” he said.

For Russia to count on Ankara as a military and security partner in the long run, Turkey has to leave NATO, he said.

"At present, Russia does not have a strategic military ally. Countries like Belarus, Kazakhstan and Armenia are not countries to defend Russia, but which need Russia’s protection,” Has added.

In a nutshell, it doesn't appear that Turkey will split from the West. Unless Russia can come up with a sustainable, collective security concept similar to NATO's, it's not realistic to expect a dalliance to become a full-fledged alliance.

But then, as emotions reign in Ankara and everything is secondary to domestic politics, perhaps no one wants an analytical decision.