Ankara was delighted with the recent Turkish-Russian summit, while Moscow sounded guardedly optimistic, but a true assessment of the meeting's implications will take time. 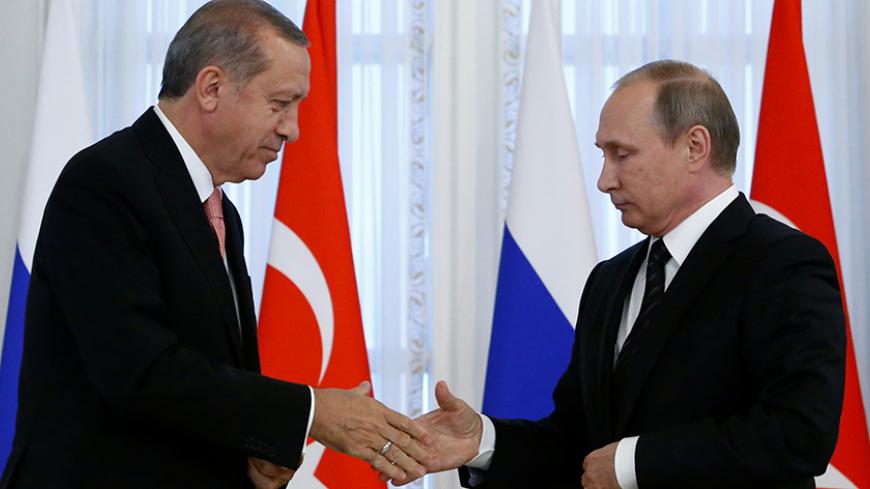 Turkish President Recep Tayyip Erdogan’s recent visit to Russia produced some significant symbolic messages. The first goal of the summit with Russian President Vladimir Putin was to tell the United States and European Union, “We can solve our problems without you, even despite you, and become friends.”

Based on Erdogan and Putin's joint press conference and subsequent media comments, Ankara above all wants to restore trade volume to the level it had reached before Turkey shot down the Russian jet, especially in tourism, agriculture and construction. Erdogan's target of a $100 billion trade volume says Turkey places a priority on trade balance. Ali Bilgin Varlik of the Ankara-based Central Strategy Institute said Turkey’s exports to Russia make up only 25-27% of the trade volume between the countries. The balance is skewed because of Turkey’s dependence on Russian natural gas. In 2014, 55% of Turkey’s natural gas imports were from Russia.

This is why during the meeting there was special emphasis on reactivating the shelved Turkish Stream natural gas pipeline, which is to carry Russian gas under the Black Sea to the Balkans and Europe via Turkey. Ankara knows this project would make Turkey an energy hub, but isn't sure Russia fully intends to follow through. The other key energy issue discussed was the Akkuyu nuclear power station that Russia is to build in Turkey. Ankara has agreed to expedite the construction process and to attribute “strategic” status to it, which means attractive perks.

The summit also referred to cooperation in the defense industry. Turan Oguz, a defense industry researcher who spoke to Al-Monitor, noted Defense Industry Undersecretary Ismail Demir's presence at the summit and a statement by Minister of Foreign Affairs Mevlut Cavusoglu, who said Aug. 10, “Until today, we wanted to cooperate with NATO member countries, but results were not satisfactory. Turkey has to set up its own defense system by developing its technology in cooperation with other countries.”

Oguz said the first step toward that goal could involve a heavily debated long-range air defense system. But even when Turkish-Russian relations were at their best, he said, the Russian offer of an Antey-2500 system for Turkey’s Long Range Air and Missile Defense Systems (T-LORAMIDS) program was among the first to be rejected because of its lower specifications and refusal to transfer technology. "I think that now, until Turkey develops its own national system, it could opt to procure a few Antey-2500 systems. This will also be a strong message to NATO," he said.

Defense analyst Arda Mevlutoglu told Al-Monitor that he also thinks efforts to boost defense industry cooperation between Russia and Turkey could be a card in Turkey’s hand against the United States, NATO and the EU.

Varlik says such cooperation with Russia could equip Turkey with new capacity in the defense industry, though he has reservations. He said, “Such cooperation could be troublesome because of differing technological standards of the two countries, doctrinal dependence of the Turkish defense industry on US/West military doctrines, sustainability of the Russian arms industry and its declining share in international markets.” Varlik noted that Turkey’s military cooperation with Israel had never surpassed the levels of cooperation with the United States and NATO. “I don’t believe that Turkish-Russian military cooperation will overtake in the next one or two years Turkey’s commitments and responsibilities to the NATO alliance,” he added.

Erdogan’s inclusion of Hakan Fidan, the head of Turkey’s National Intelligence Organization, in the delegation to Russia indicated that Syria was one of the key agenda items of the summit. It appears that Ankara and Moscow want to cooperate toward a solution in Syria and reconcile their divergent political objectives about Syria's future.

To this end, and to avoid another incident such as Turkey shooting down a Russian jet, it appears Russia and Turkey will be sharing intelligence, similar to what was done with Israel. Erdogan has given the go-ahead for Turkey to set up a tripartite system for aligning military, intelligence and bureaucratic interests between the two countries.

It is not hard to guess that Turkey lobbied feverishly for its warplanes to have access to Syrian air space, especially the area of northern Syria controlled by the Kurdish nationalist Democratic Union Party (PYD). Recent headlines such as “Turkish warplanes resuming Syrian flights after 10 months” are but reflections of this hope.

It is also likely that the status of the PYD and Turkey’s struggle against the Kurdistan Workers Party (PKK) were among sensitive issues at the summit. After the meeting, Erdogan said, “My friend Putin learned from us for the first time that the PYD had opened an office in Moscow. We had photographs of it. We showed them to him. He told us he will follow it up." Erdogan's statement raised many eyebrows, as the office opening in February was reported internationally. Though some media referred to the group opening the office as a Kurdish nongovernmental organization, the mission was led by a PYD member.

Whether the PYD office closes will become a test of the importance Putin places on his relationship with Erdogan and the sincerity of Moscow in its relations with Turkey.

It also appears the leaders discussed at the summit a cease-fire in Syria, military and political solutions, refugees and, most importantly, the status of Syrian opposition groups, especially of moderate jihadis.

Cavusoglu said easing regional competition in the Black Sea was also on the agenda. He said lowering the tension there will allow Turkey at least some breathing space in the north after the July 15 coup attempt.

Varlik, Mevlutoglu and Oguz agree that the most important aspect of the summit was its timing after the coup attempt and whether its outcome could be a turning point not only in Turkish-Russian ties, but also in relations with the United States, NATO and the EU, particularly regarding Syria. Obviously, Ankara leaders returned from the summit with high hopes. Moscow tends to be a bit more guarded.

To really learn the ramifications of the St. Petersburg summit, it is time to look at developments in the military and security fields, especially for a solution in Syria; Turkey’s war with the PKK and its relations with the PYD; the future of moderate opposition groups in Syria; and Turkey's relations with NATO and the United States.