Despite differences, Turkey, Russia forge on

President Vladimir Putin plans to travel to Ankara soon to “open up new horizons” in Turkish-Russian ties, even if the two countries differ on issues such as Syria, Ukraine and Cyprus. 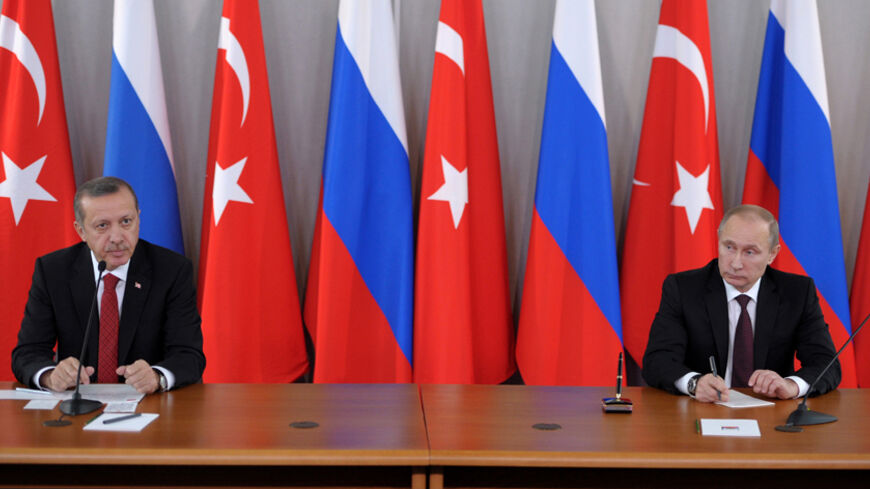 Russian President Vladimir Putin is due in Turkey in early December for the fifth annual meeting of the High Level Cooperation Council, which the two countries established in 2010. He plans to use his visit to “open up new horizons and take bilateral relations even further,” to use his words. Putin made this remark while accepting a letter earlier this week from Turkey’s newly appointed ambassador to Moscow, Umit Yardim.

Given the warmth reflected by Putin during the Kremlin ceremony, when he also underlined his extremely close dialogue with President Recep Tayyip Erdogan, one would not be amiss in assuming that all is well in Turkish-Russian ties.

It is Erdogan himself, however, who not so long ago underlined that this was not necessarily the case, especially when it came to Syria.

“Unfortunately, we disagree with Russia over the Syria issue. We have talked about this many times, but we have wasted time, despite our meetings. Russia continues to support [the Syrian regime],” Erdogan told reporters when he was flying back to Turkey from an Oct. 25 visit to Estonia.

Russia has in fact proved to be the main obstacle for Erdogan’s Syria policy, which from the start has been based on getting rid of Bashar al-Assad. Moscow has firmly opposed Turkey in this regard and has used its veto in the UN Security Council to block all resolutions against Assad. Meanwhile, it has continued to arm the Syrian regime against the Free Syrian Army, which is supported by Ankara, and other opposition groups.

Russia’s efforts to restart the Geneva process to achieve a negotiated settlement to the Syrian crisis with the involvement of Assad regime have not gone down well in Ankara either. Both Erdogan and Prime Minister Ahmet Davutoglu remain staunchly opposed to any proposal that provides Assad and his regime with any degree of legitimacy.

Syria continues to be the source of latent tensions between the two countries, but it is not the only problem between Ankara and Moscow. Turkey is also unhappy with developments in Ukraine, and particularly in Crimea, where the Tatars — who are closely related to Turks — represent a significant portion of the population but face serious pressures and are increasingly marginalized.

Erdogan told reporters at a press conference during his visit to Estonia in October that Turkey rejected steps taken by Moscow against leaders of the Crimean Tatar community. Meanwhile, Ankara continues to argue that Ukraine’s territorial integrity should be respected. But Turkey has taken no steps against Russia, and is also refraining from participating in the sanctions imposed on Moscow by the West.

Cyprus remains another sore point between Ankara and Moscow, especially the Greek Cypriot administration’s attempts to exploit massive offshore gas reserves. Turkey argues that Turkish Cypriots have a stake in these reserves, and says that they cannot be exploited until a comprehensive settlement is secured on Cyprus.

In a retaliatory move, Ankara recently gave notice that it would start seismic surveys in the disputed parts of the Mediterranean off the coast of Cyprus, and has sent warships to the region to underscore its position.

Russia, however, stands by the Greek Cypriot administration in this dispute. Putin reportedly gave assurances to President Nicos Anastasiades to this effect during a meeting in Italy in October.

Greek Cypriot government spokesman Nikos Christodoulides issued a written statement following Putin and Anastasiades' meeting, stating: “Mr. Putin reaffirmed the Russian position of principle in relation to the solution of the Cyprus problem as well as on the Republic of Cyprus’ inalienable right to use and exploit the natural resources within its Exclusive Economic Zone, describing any violation of the Republic of Cyprus’ sovereign rights as unacceptable.”

Meanwhile, Russia held joint military exercises with the Greek Cypriot side at the end of October. The exercises were generally accepted as a show of force by Moscow and Nicosia against Ankara, although Russian and Greek Cypriot officials have denied this.

Given such differences on issues of vital importance to Turkey and Russia — not to mention other problems, like the deployment of NATO assets in Turkey, which has angered Moscow — one would be forgiven for questioning what “new horizons” Putin hopes to open during his upcoming visit to Turkey.

It is not as if Turks are enamored of the Russians either. The Pew Research Center, in its latest Global Attitudes Survey, found that only 16% of Turks have a favorable view of Russia. Clearly, however, realpolitik remains at the core of Turkish-Russian ties, ensuring that they are amenable to the opening of “new horizons.”

To start with, the two countries are engaged in extensive economic relations. As Paul Saunders wrote Nov. 14 in Al-Monitor, two-way trade reached $32 billion in 2013 — mostly Turkish imports of Russian gas — which has made Russia Turkey’s second-largest trade partner after Germany.

Turkey is Russia’s No.1 trade partner in the services sector, according to Russian central bank statistics. Furthermore, several joint projects are in the pipeline in strategic areas such as a nuclear energy, while Turkey remains a prime destination for millions of Russian tourists every year.

Volkan Vural, a former Turkish ambassador to Moscow and current member of the board of directors of TUSIAD, the influential Turkish Industry and Business Association, also underlines the economic dimension as a key factor that keeps Turkish-Russian ties on track, despite serious political differences.

“Turkey’s dependence on Russian gas, Turkey’s dependence on the Russian market for its exports, as well as the very large volume of contracting projects Turkish companies continues to undertake in Russia — all of these push political differences to another corner of the table,” Vural told Al-Monitor.

Vural pointed out that this was also why Ankara has done little against Russia with regard to developments in Ukraine or Crimea, despite utterances of displeasure by Erdogan and Davutoglu on these issues.

As for Moscow’s political interest in maintaining good ties with Turkey, Vural said: “Russia considers itself at war with the United States and Western Europe. It divides Europe into two and sees itself as a leader in Eastern Europe. It wants to head this portion of Europe and maintain stability there based on a capitalist but authoritarian outlook. Moscow wants to see Turkey move away from Western Europe toward this part of Europe.”

Putin is not exaggerating when he says he has a very close dialogue with Erdogan. Erdogan has also admitted that he enjoys close ties with Putin. As Natalie Nougayrede pointed out in an Oct. 29 article for the Guardian, Erdogan and Putin have much in common: “They aspire to be fathers of the nation. Their political narrative mixes nationalism and anti-liberal traditionalism. Their vision of society, as well as their methods of governance, run counter to the values Europe promotes. They concentrate power, repress opposition, restrict media freedom, control the Internet, and have cowed the judiciary. Both play religious cards.”

Vural pointed out, however, that Ankara cannot afford, in its final analysis, to overlook Russia’s status as a superpower with czarist ambitions that also encroach on Turkey’s interests. “Turkey has to tread very cautiously because of this and its relations with Western Europe will continue to remain vitally important because of this,” Vural wrote.

Turkey’s relations with Russia, however, are set to remain stable for the foreseeable future based on the dictates of realpolitik.