Moscow’s acknowledgment of the Armenian genocide and President Vladimir Putin’s visit to Yerevan for the genocide commemorations shake Turkish-Russian ties. 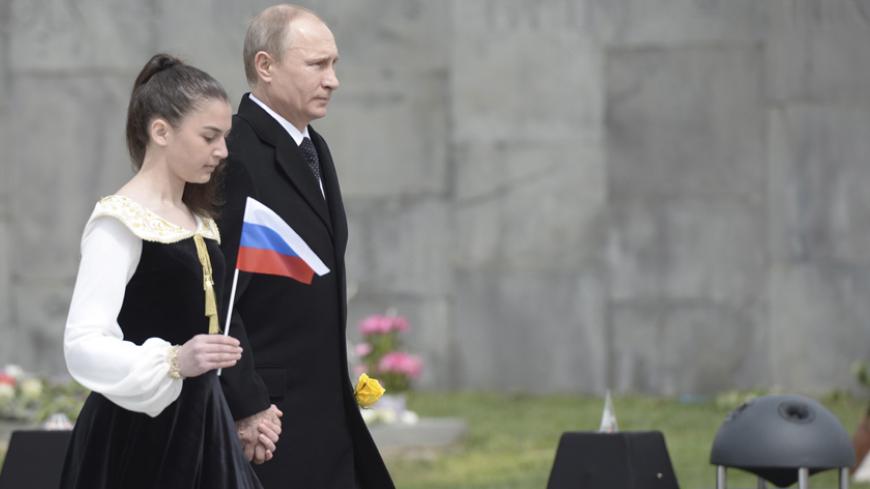 Turkish-Russian relations were among the potential victims of this year’s commemoration in Yerevan marking the centenary of the Armenian genocide. President Vladimir Putin, whose close ties with President Recep Tayyip Erdogan have frequently been highlighted, was singled out by Ankara after his strong remarks on the events of 1915, and his attendance of the ceremony in Yerevan to commemorate the Armenian victims of that period.

Putin’s emphatic use of the term genocide — which Turkey rejects — angered both Erdogan and Prime Minister Ahmet Davutoglu, who did not hold back in expressing their disappointment and using sharp language in return.

In its official response, Ankara told Moscow to take a better look at what it has done in Ukraine in the past, and is doing there today, and to also remember the crimes against humanity it perpetrated in the Caucasus, Central Asia and Eastern Europe.

The unprecedented manner in which Ankara lashed out at Putin also resulted in questions as to whether Turkish-Russian ties can survive this crisis. These ties are already marked by deep differences over issues such as Syria, the Crimean Peninsula and Cyprus. These issues, though, were never allowed in the past to overshadow the vast economic interest the two countries share, and the growing cooperation in the strategic field of energy.

Putin issued his first message to the Armenians on April 22, before traveling to Yerevan. In it he said, “April 24, 2015, is a sorrowful date linked to one of the most tragic and dramatic events in the history of humanity — the genocide of the Armenian people.”

Putin repeated these sentiments at the Tsitsernakaberd Armenian Genocide Memorial Complex in Yerevan on April 24.

“We have sincere sympathy for the Armenian people, who went through one of the greatest tragedies in human history,” he said.

“Russia felt these events as its own grief. Hundreds of thousands, even millions, of defenseless and homeless Armenians found shelter in the Russian Empire and were saved,” Putin added. He also recalled that it was Moscow that at the time had initiated a joint statement by Russia, France and Britain referring to the events as “a crime against humanity and civilization.”

Ankara felt no need for diplomatic niceties or restraint in its response to Moscow. “We reject and condemn the labeling of the 1915 events as ‘genocide’ by the president of the Russian Federation, Vladimir Putin, despite all our warnings and calls,” the Foreign Ministry in Ankara said in a written statement.

“Taking into account the mass atrocities and exiles in the Caucasus, Central Asia and Eastern Europe committed by Russia for a century, the collective punishment methods such as Holodomor, as well as inhumane practices, especially against Turkish and Muslim people in Russia’s own history, we consider that Russia is best-suited to know exactly what 'genocide' and its legal dimensions are," the statement added.

It said that Putin’s attendance at the ceremony held in Yerevan should also be considered in this context as “Holodomor,” or “extermination by hunger,” which refers to the deaths of anywhere up to 7.5 million Ukrainians in 1932-33 as a result of Stalin’s collectivization program. Kiev continues to seek international recognition for this “genocide by starvation” for which it blames Russia.

Erdogan, for his part, did not hold back from expressing his “disappointment” at Putin, who he said had “offended” him. “I am personally disappointed and offended that Putin has taken this step,” Erdogan said April 27. “If Russia is taking some steps relating to genocides, then it should lay its own history on the table first,” he added.

Erdogan said there was no need to go too far back in history for this, and pointed to events in Ukraine, and particularly in Crimea, and Donetsk. “They should account for these,” Erdogan said, hitting at Moscow on a currently sensitive position.

Turkey is at odds with Russia over Ukraine, and especially Crimea, where there is a significant Tatar minority that does not want to be part of Russia. Turkey has nevertheless maintained a low-key position with regard to this issue, and has also refused to participate in Western sanctions against Russia.

Putin’s visit to Turkey in early December was used by the sides when the two leaders, who have alienated the West for a host of political reasons, displayed solidarity, and tried to show the world that they are not as isolated as others claimed.

Putin also pulled out a surprise for Turkey during that visit by saying they would divert the South Stream pipeline project — which was to connect Russia and Europe through Bulgaria — to Turkey, from where gas could reach Europe through Greece.

This was followed by a groundbreaking ceremony held at the ministerial level earlier in April for the Akkuyu Nuclear Power plant, to be built in Turkey by the Russian Atomstroyexport (ASE) company, thus compounding the strategic energy link between the two countries.

Asked if Moscow’s position on the Armenian issue would bring up the issue of sanctions against Russia, Davutoglu suggested that the matter was being evaluated but remained noncommittal on the topic. “Necessary initiatives in this regard are continuing at the moment. But what is important is that we express our position to the world in an open manner,” Davutoglu said while talking to reporters in parliament in Ankara on April 23.

It was also interesting that the damage control in this crisis came from the Russian side. Kremlin spokesman Dimitry Peskov tried to sound an optimistic and positive note. “We have said in the past that our multidimensional cooperation is a priority for us. We hope that our ties continue to develop in the same way that they have until now,” he said at a Moscow news conference in response to a question.

“We have many joint projects and therefore much to do,” he added, going on to say that he did not expect Putin’s attendance at the commemorations in Yerevan to damage Turkish-Russian relations.

Volkan Vural, a former ambassador to Moscow (1988-93) who is currently a member of the advisory board of the influential Turkish Industry and Business Association (TUSIAD), is among those who believe this crisis with Russia will blow over before long.

“Turkey did not recall its ambassador in Moscow the way it did from other places, so this is a clear indication of what is to come,” Vural told Al-Monitor.

He said such statements from Ankara carry much less international weight today than they might have in the past and should therefore be seen as rhetorical, and aimed more at trying to appease a nationalist audience at home.

“The world has come to know Ankara’s style by now and no one takes it all that seriously anymore,” Vural said, referring to the many angry and vitriolic outbursts by Erdogan, in particular, on various international issues.

Cenk Baslamis, a veteran journalist and former Moscow representative for the daily Milliyet, believes that neither Turkey nor Russia has an interest in escalating the tensions that have arisen over the Armenian issue.

“I don’t expect this matter to be taken much further,” Baslamis told Al-Monitor, after pointing to the massive joint projects the two countries are involved in. He nevertheless believes that “Russia scored a serious goal against” Turkey in this matter.

“Armenia’s budget is $5 billion. whereas the Akkuyu project alone is worth $25 billion. Moscow could have explained to Yerevan the strategic reasons why Putin could not attend the ceremony there, but didn’t,” Baslamis said.

“Whether this was due to differences over Syria, Crimea, etc., or because bargaining on some key issue behind the scenes went awry is not clear at this stage,” he added. Suggesting that Turkey should not take Russia for granted, Baslamis also recalled that “a relationship with major power is like going to bed with a bear.”

In the final analysis, Turkish-Russian ties will most likely weather this storm due to the overwhelming weight of mutual interests. But the magic in these ties, if it existed at all given the many differences between the two countries, may have been lost over the Armenian question.