An Iraqi alliance bringing together Sunni and Shiite parties has succeeded in forming the local government in Baghdad without the participation of the prime minister's State of Law Coalition. 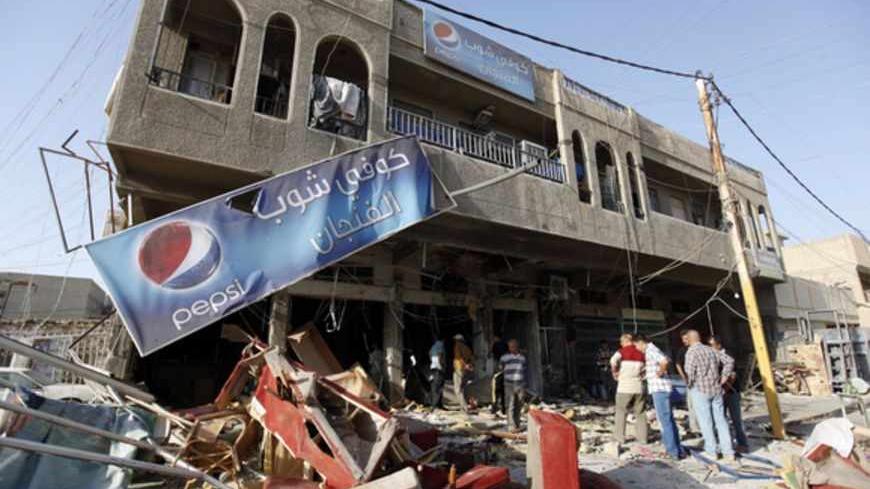 Residents gather at the premises of a coffee shop that was destroyed in a suicide bomb attack the night before, in Baghdad June 17, 2013. - REUTERS/Saad Shalash

An alliance combining Shiite and Sunni currents in Baghdad succeeded last Saturday, June 15, in forming a local government without the participation of the State of Law Coalition. The latter was the largest winning bloc in the local elections held this past April. This step represents a development that will have major implications on the course of the political conflict in Iraq and the general election scheduled for 2014.

Despite the success of Prime Minister Nouri al-Maliki's State of Law Coalition in obtaining 20 of 58 seats in Baghdad, the Al-Ahrar bloc, led by Muqtada al-Sadr, won 11 seats; the Sunni Mutahidoun block, led by Osama al-Nujaifi, obtained seven seats; the Citizen bloc obtained six seats and around 14 seats were distributed over other blocs and minority quotas. The way the seats were distributed allowed these forces to come together and form a government that excluded the biggest winner in the elections.

At first glance, it seems that this distribution, according to which the local government of Baghdad was formed on Saturday, is wide-ranging, inconsistent and incompatible at key points. It also seems that the State of Law Coalition will overcome its loss by trying to attract small blocs in the Baghdad Council to change the current government, a scenario that may be realized in the coming months. There is, however, another scenario that is more attainable, which involves the new alliance in Baghdad achieving greater harmony and making this experience a prelude to changing the political map in the general elections in 2014.

Not only does Baghdad have the largest population in Iraq (about 8 million), but its local government may have the means to tame the sectarian sensitivities, which are becoming more dangerous in Iraq and the region.

The Sunni Mutahidoun bloc was given the most prominent legislative position in the city — head of the provincial council — while the position of governor was allocated to the Sadrist movement, and Ammar al-Hakim’s party obtained the position of mayor of Baghdad. This represents a new step in understanding the nature of the conflict in Iraq and finding a way to resolve it.

The conviction that led to the formation of Baghdad’s government a few days ago was that the country needs all of its parties to share responsibility, and feel that they are an integral part of Iraq’s future. It is this conviction, not electoral calculations, which led to the recent agreements in Baghdad.

On the ground, the experience of the local government in Baghdad over the past years was not successful. The Iraqi capital hit rock bottom in the areas of security, services, infrastructure and investment projects. It is worth mentioning that Baghdad was classified in 2012 as the worst capital in the world, according to Mercer's Quality of Living index.

These terrifying results may be justified through comparison, in terms of the magnitude of the political and security conflict in the city. But no one imagined that several cities in Iraq, including, of course, the cities of the Kurdistan region, would surpass the capital in almost all categories.

Perhaps the new distribution of powers in the local government in Baghdad may be explained as a response to this fact, but the implications stretch much further.

The traditional Iraqi Shiite forces believe today more than ever that there is a clear imbalance in the Iraqi governing mechanisms and that this imbalance is what led to the ongoing security and political turmoil.

Moreover, for years now, Iraq's Sunnis have believed that they are a marginalized party in the Iraqi government's decision-making process, while the Shiite parties refuted such allegations by noting the number of positions Sunnis obtained in the previous and current governments.

In this context, a key factor is the difference in interpretation regarding the concept of partnership. Partnership is not as much about sharing positions in government as it is about maintaining a general sense that the Iraqi forces participating in any government are a part thereof, share its responsibilities and do not belong to the government in form while contradicting it in substance.

It is too early to say that the experience of the local government in Baghdad is a meaningful step toward this partnership, not only because it will take longer to determine whether its forming parties are getting along, but also because its local government and provincial council have the smallest scope of powers compared to the other cities of Iraq. This is because these powers are encroached upon by the federal government in terms of its ministries, institutions, organizations and political conflicts.

Yet, any change in paths and options is an important development for Iraq. This change seems today to be needed more than ever.