Can Israel's Settlers Be Persuaded To Exit the Occupied Territories?

Yedidia Stern, a religious Jew, believes that Israelis are finally ready to make a democratic decision on the fate of the territories. 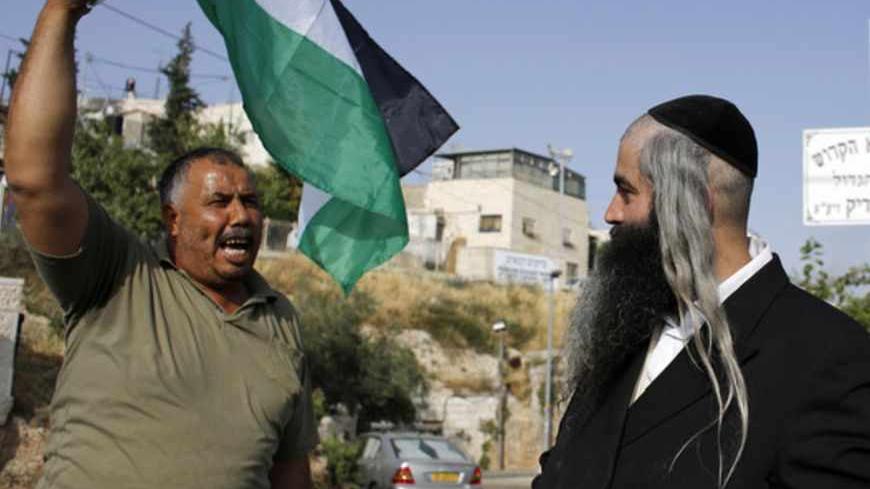 A protester waving a Palestinian flag shouts at an Orthodox Jewish man in the Sheikh Jarrah neighborhood of east Jerusalem, May 17, 2013. - REUTERS/Ammar Awad

Yedidia Stern, a renowned law professor at Bar-Ilan University, skullcap on his head, recalls how as a child, he walked the streets of Tel Aviv with his father on their way to the synagogue. He was dressed in a white shirt, just like his father, and the two of them were marching solemnly to welcome the Sabbath. He still remembers, as if the years had not passed, what it felt like to be a religious Jew in those early years of the state. It was tantamount to living on the edge of society. The then-young Israeli state was celebrating its secularism and Israeli experience, and viewed religion and skullcap-wearing religious Jews as characteristic of Jewish life in the Diaspora. For years, religious Jews were considered a minor sector, trailing behind secular Zionism.

“As a child, I believed that it was bound to be like that — that I and my religious friends were destined to it,” Stern reminisced in his office at the Israel Democracy Institute in Jerusalem, where he serves as vice president of research. “At the time, I thought that since I belonged to a small, inconsequential sector, I could not hope for a great future. We had no big dreams. We regarded the secular (sector) as the lords of the land, and this was true in particular in Tel Aviv, the most secular of Israeli cities.”

Then, a military-political earthquake shook the land, at the height of which the settlers became the spearhead of Israeli national policy, both in the domestic arena and on the international front. The 400,000 national-religious activists who settled in the territories occupied after 1967 changed the secular world's perception of the religious Jews, and even more so, the way the latter perceived themselves. All of a sudden, they had been brought to the fore and socially elevated, and secular Israeli society was demoted, even lagged behind them. It is no secret that the settlers have been a top priority on the Israeli foreign and defense-policy agenda.

“I must say that the national-religious community has long since broken through all sectarian boundaries,” Stern explains. “In the community I belong to, we feel that it is our turn now in the relay race of Zionism.

"We are well aware that the secular were the first to light the torch of Zionism, and we also realize that founder of the Zionist movement Ze’ev Herzl and Israel's first prime minister, David Ben-Gurion, viewed religion as a distinctive product of Jewish life in the Diaspora. However, with time, the sentiment has changed and we now feel that this highly important baton in the relay race has been passed on to the religious Zionist community, whatever its diverse trends are.”

Like many in the national-religious Zionist camp, Stern believes that the "big bang" occurred immediately following the 1967 Six-Day War. Up until then, the national-religious camp was more of a spiritual community striving to take its place in Israeli society at large. However, this changed shortly after the war ended. The territories that came under Israeli control inspired in the national-religious public an overpowering mystical attraction to the area. Many of them saw in the Israeli victory a sign from heaven heralding the return home — to the Biblical homeland bequeathed by its forefathers, Abraham, Isaac and Jacob.

“The Six-Day War let the messianic genie out of the bottle of religious Zionism,” says Stern. “All at once, the holy places which had been the imagined object of yearning became actual sites of worship.” Evoking those days, Stern tells how his friends left everything behind — even brothers and sisters — and, moving out of their homes, flocked to the hills of Judea and Samaria to settle them. The rise to power of late prime minister Menachem Begin in 1977 was the starting signal. It was clear then that the dream of the settlers was about to come true.

In those days of burning messianic fervor, Stern found himself in the minority among his friends. Only a few remained behind, while a surging wave of ecstatic religious youths, driven by intoxicating mystical passion, rushed to settle in the "promised land." As a child raised on the ideal of the sanctity of the land of Israel, Stern found himself in a dilemma. He had to make up his mind which side to take, now that the Greater Land of Israel was under Israeli control.

“I, too, have deep feelings for the territories. However, unlike others, I don’t claim to have the key to deciphering history,” Stern notes. “Zionism must ensure a national home for the Jewish people, but it should not rule over another people. In my opinion, the ideal solution would be to establish a spiritual and emotional bond with Judea and Samaria, while giving up the political relationship.”

Many in Israel and abroad believe that the settlers have become the most influential factor in this political game, shaping Israel's policy with regard to the Palestinians. All Israeli governments since 1977, excluding the Yitzhak Rabin administration, have been associated with the right and granted the settlers unprecedented political power. I asked Stern how the settlers would act if and when they were asked to evacuate their homes.

“There are two rivaling trends in the religious Zionist camp,” he says. “There are those who seek to integrate into Israeli society and see in Israel a state that represents their religious beliefs and concepts. They accept the democratic game and comply with its rules. On the other side, there are those national-religious zealots who wish to distinguish themselves from the rest of society. They want to keep apart and thus dress differently, live by themselves, choose to do their military service in separate units and call for separation of men and women.

“I am sorry to say it, but the battle is still going on and it isn’t at all clear which of the sides will ultimately have the upper hand. It is obvious, though, that the separatist group is currently setting the tone in the debate that divides the religious Zionist community, and this is the most serious threat to the integrity of Israeli society.”

To make his point about the dispute, Stern uses the metaphor of a train made up of various cabins, representing different groups and sectors. The train is traveling on two parallel tracks — the Jewish track and the democratic one — while being shot at from the outside in attempts to derail it.

“What is the issue around which the internal wars in Israeli society revolve, do you know?” Stern asks me and, in the same breath, answers. “It is over the really big question, the question of who is going to sit at the helm and determine the fate of the state of Israel. I think that we are approaching the moment of truth.”

Is Israel about to decide where it is heading? It seems that today, 46 years following the Six-Day War, the Israelis are ready to make a decision — whether the territories occupied in 1967 should form an inseparable part of the Land of Israel or be ceded to the Palestinians to become their homeland.

Stern is optimistic. He believes that a democratic decision, one way or another, cannot and will not undermine Israeli society.

“Israelis have a strong and solid backbone,” he says. “I am confident that they will do their best to safeguard whatever they have achieved. But if a decision to leave the territories is not taken, it could be the end of Israel as a democracy.”