Despite criticisms of the Oslo Accords, and the victims who have fallen on both sides since their signing 20 years ago, the agreement nonetheless opened the way for today's negotiations. 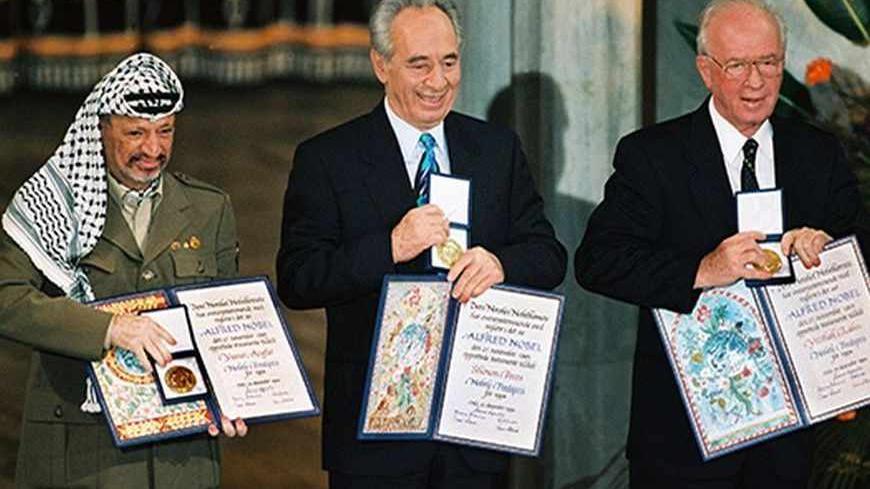 It was an event destined to transform Israeli politics, more so than any event that preceded it. From that point on, the Israeli-Palestinian conflict was to change course. But about a month after the signing of the Oslo Accords on the White House lawn, on September 13, 1993, the agreement reached the Knesset. The right-wing parties, flabbergasted by the move, were beside themselves with anger. They were determined to make it really difficult for Prime Minister Yitzhak Rabin, who had dared to cross the Rubicon.

Just a few years earlier, in 1989, Israeli citizens had been arrested for having contact with Palestinian officials. Now, none other than the prime minister himself, was publicly shaking hands with the man who, for years, had been depicted as an arch-murderer. Pictures of Palestine Liberation Organization leader Yasser Arafat adorned the streets of East Jerusalem, and the flags of Palestine flew from balconies in that part of the city. Israelis, however, were sharply divided over the agreement, with its enthusiastic advocates on the one side, and its opponents, who were resolved to prevent its implementation at all costs, on the other.

At the time, I was serving as the parliamentary correspondent for the Israeli daily Davar. The atmosphere in the Knesset corridors was one of a prewar era. Urgent meetings were called, all with the aim of looking for ways to torpedo the agreement before it could be submitted to a vote.

A year before the agreement, Rabin had managed to put together a coalition of leftist parties and move into the Prime Minister's Office. Already at that time, the right-wing parties had launched an uncompromising struggle against the newly elected government, which put peace at the top of the national agenda. As far as the leaders of the Israeli right were concerned, this was not merely a political struggle, but above all, a battle for the identity of Israeli society. The desire for normalcy harbored by many Israelis and the aspiration for peace with the Arab world actually intimidated the right wing, in particular, the main part of the religious community, which considered its faith to be the foundation for the existence of Israel.

The confrontation between these two worldviews escalated in the summer of 1992, when the left wing rose to power. It was the first time since the founding of the State of Israel that a coalition government had been established without traditional partnerships with the religious and Ashkenazi ultra-Orthodox camps. As if that weren't enough, instead the Rabin government relied on the support of two Knesset factions consisting of a majority of Arab representatives.

The change in the public mood could be felt immediately after the signing of the accords. The Rabin government was in for an unusual welcome. Tens of thousands of rightist activists filled the streets of Jerusalem, flocking to the city from far and wide. Hundreds of busloads of settlers also heading toward Jerusalem. The roads leading to the Knesset looked like a battlefield. Major transportation arteries were blocked, with the professed intent of disrupting the lives of Israelis.

The ultra-Orthodox community did not remain on the sidelines. Rabbinical college students left the tents of the Torah to take part in the struggle against the agreement. Thousands of ultra-Orthodox Hassidim in their black hats mingled with settlers wearing knitted skullcaps [distinctive of the national-religious community]. The ultra-Orthodox also joined the riots, and following suit, went on a rampage, waving blatantly abusive, anti-government banners.

The ultra-Orthodox press virtually freaked out. “Rabin and [Israeli Foreign Minister Shimon] Peres have ensured their place in Jewish history as the worst of Israel’s foes,” one newspaper declared. “They are [no better than the] Judenräte and Kapos.”

Peace with the Palestinians was interpreted by the right wing as tantamount to the concession of the spiritual sovereignty of Israel over the biblical homeland territories — Judea, Samaria and Gaza. The Oslo agreement officially sanctioned, by the signature of the Israeli government, the right of the Palestinians to self-determination over those very same territories.

Religious fanaticism was liberally backed by citations from Jewish jurisprudence. Harsh religious rulings were issued, one after the other, each more strident than its predecessor. The Oslo Accords reminded many of Nazi Germany. Right-wing leaders never missed an opportunity to liken the situation in post-Oslo Israel to that of the Jews following Hitler's rise to power. On September 4, a few days before the signing ceremony in Washington, Ariel Sharon had declared, “Even those who were sent to the gas chambers in the concentration camps did not believe they were going to their death.”

The Knesset did not lag behind the street. The Israeli parliament turned into yet another arena for unbridled incitement against the signatories of the Oslo agreement. Motions of no confidence were repeatedly submitted against the government. It was an unprecedented wave of such votes, the likes of which had never been seen in the Israeli parliament. Almost all of these motions involved the agreement with the Palestinians.

Prime Minister Rabin seemed to be surprisingly unperturbed by the goings-on around him. Even though he had not been eager to sign the agreement, and could not hide his revulsion at the public handshake with the PLO leader, he stood fast in defending the accords.

When delivering his inaugural address as prime minister in July 1992, Rabin had pledged to bring down the walls between Israel and its neighbors and called on the Palestinians, his voice quivering with excitement, to make peace with Israel. A year later, Rabin would emerge as a leader true to his word, having fulfilled his pledge to his voters.

I once asked him how he was coping with the demonic aura pulsing around him courtesy the Israeli right. He shrugged his shoulders, as if to indicate that he was not losing sleep over it. He was obviously determined to change the course of Israeli history and courageously confront the long-standing and bloody conflict between Israel and the Palestinians.

Twenty years have passed since the Oslo Accords were signed, and it seems that regardless of the criticism leveled against it, and notwithstanding the numerous victims on both sides, the agreement has brought about a significant change.

“The Oslo accords laid down the foundation for all other agreements,” I was told a month ago in a call with Yair Hirschfeld, an academician involved in the negotiations that preceded the signing of the agreement . “It is on the basis of the Oslo Accords that we have managed to make headway toward resolving the conflict with the Palestinians. We had no illusions, as already then, we knew that it would take many more years before we could achieve peace. However, right now, I am optimistic. Had it not been for Oslo, we would not have been in the situation we are in today.”