The conviction of Rabbi Motti Elon for sex offenses has generated a profound crisis of confidence from which the nationalist-religious community will find it hard to recover. 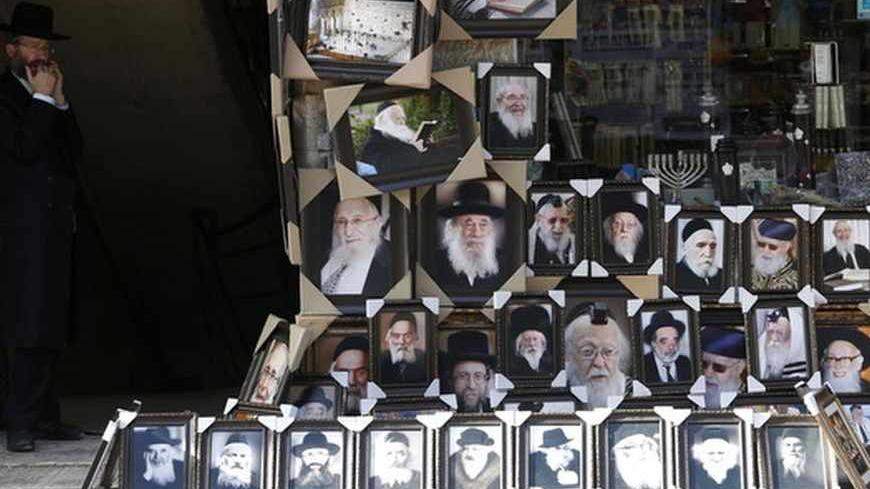 An ultra-Orthodox Jewish man stands near a display of pictures of Rabbis and religious leaders for sale outside a shop in Jerusalem's Mea Shearim neighborhood, June 4, 2013. - REUTERS/Baz Ratner

The Jerusalem Magistrate Court has been quite often the setting for dramatic scenes of the type seen in cinematic thrillers. A succession of “heroes” and “notables” who had gone astray and got entangled with the law has been ushered into these small courtrooms over the years. Last Wednesday, Aug. 7, the entrance to the place was jam-packed long before the proceedings began. A multitude of curious onlookers and passersby crowded the lobby, waiting tensely for the star of the great drama that was about to unfold inside.

Around 9:00 a.m., the defendant, Rabbi Mordechai "Motti" Elon, arrived at the courthouse surrounded by a large entourage of men wearing the knit skullcaps distinctive of the national-religious community. Few rabbis in Israel have reached the status of admiration and worship attained by this man. But now he looked gaunt, his beard gray, an outsized white skullcap covering his head down to the ears. I recalled how he used to look a few years ago. His skullcap was smaller then, and his body fuller. The man who, in his heyday, had swept both the religious community and the secular public off their feet looked like a shadow of his former self.

Already early in the morning, the radio news channels were fueling the tension in anticipation of the court's decision. The revered rabbi, father of 11 children and grandfather of many more, was charged with sexual harassment of a number of minors. The trial stirred up quite a storm in the national religious community. The very thought that Elon could be suspected of indecent acts against young boys triggered an unprecedented spiritual turmoil in the national religious camp.

The complaint filed against him was unusual in the very fact that it had been handled by the state authorities. The national religious community has invariably conducted itself as an intimate family, closed to outsiders. Any irregular incidents that may have occurred within this camp were dealt with inside the community, without involving external law-enforcement elements.

Since the 1967 Six Day War, the religious Zionist camp has turned full force toward Judea and Samaria to settle the area. Its members flocked there in large numbers to establish settlements and make their homes there. Everyone knew everyone, and the rabbis held sway over the entire community. They were considered the supreme religious and spiritual authority that set the law. Any problem within the family? Go to the rabbi for advice. Any trouble between spouses? Turn to the rabbi for guidance. Any difficulty at school or a personal crisis? The rabbi is the one to appeal to.

To a large extent, the rabbis were seen as the spiritual descendants of the Biblical forefathers of the Jewish people and as God’s representatives on earth. Among this group of rabbis, Elon shone brightly. The son of former Supreme Court Justice and Deputy President Menachem Elon, and the brother of District Court Judge Joseph Elon, as well as of former Knesset member and Minister of Tourism Benny Elon and celebrated writer and educator Ari Elon, Rabbi Motti Elon followed in the footsteps of his family, whose glorious heritage set it and him apart as the nobility of the national religious sector.

He was a highly popular lecturer, filling halls whenever invited to talk on the Torah or on any other religious issue. Addressing his listeners, he used to raise and lower his voice dramatically, move his body peculiarly and wave his hands and gesture as if he were on a theatrical stage. And the audiences seemed to be captivated by his overflowing charm and charisma. There was no other rabbi who managed to reach across and beyond the boundaries of the national religious sector the way Elon did. He was seen, even by the secular public, as a figure capable of bridging the deep religious-secular divide in Israel.

So when the sexual allegations against him were first made public, it felt as if the earth were shaking. In his trial, Elon claimed that any physical contact he had made with his students was merely a fatherly expression of affection. The latter argued, however, that he used to rub against them to satisfy his sexual desires. When the judge entered the packed courtroom, there was a hush. All those present stood in respect. Elon and the devotees surrounding him were certain that the judge would summarily dismiss all charges against him and that in no time at all they would all be dancing and celebrating the acquittal. But that's not what happened.

Reading the verdict, the judge left no room for doubt, making it instantly clear what the judgment was going to be. She announced that the court found the defendant guilty and stated that he had forcibly committed indecent acts against his students. But at that point, nobody was listening. The religious public was in shock.

While some in the community believed the version presented by Elon, others accepted the court's ruling. They were at a loss, torn between blind faith in the man they used to look up to and belief in legal justice. Whom should they follow? And whom should they trust? Some burst into tears when the damning verdict was declared. Others found it difficult to hide the shock that jolted the religious sector at large.

“It was not only Rabbi Elon who sat in the dock,” wrote Yair Ettinger, a commentator for the Israeli news daily Haaretz, the day after the conviction. “It was also the religious Zionist camp that was standing trial, divided as it were, and bearing the sins of its leaders. … The rabbis are far less revered today. This is perhaps the deepest effect of the Elon affair.”

There were also those who sought to draw public attention to the victims rather than leave center stage to the offending rabbi. Elituv Ben Pazzi, who serves as coordinator of the hotline for sexually assaulted religious youths, said that the religious community, which should have taken care of its flock, failed to do so. He said, “Given its failure in situations such as these, the religious community has become a most dangerous place for its members, a place where they are exposed to assault and where it is impossible to help the victims. … If we openly talk about it, we will be driven out of the community. And if we keep mum, the truth will eventually come to light. So which course of action should we opt for?”

And how did the convicted rabbi himself respond to the verdict? Immediately after Judge Hagit Mack-Kalmanovitz declared her verdict and left the courtroom, Elon opened the Book of Psalms and started reading aloud verses in front of the journalists who encircled him. It was as if, struggling to disconnect himself from what was happening around him, the rabbi concentrated on devotedly reciting the verses, closing his eyes and shaking his body from side to side.

The sensational trial has turned the spotlight on the phenomenon of homosexuality in religious society and raised the issue for discussion in the community. While Israeli secular society has accepted it as a natural phenomenon, the religious society still finds it hard to accept homosexual youth. The sex affair of Elon has not contributed to openness about the phenomenon. On the contrary. His conviction has sparked a sharp dispute in the national religious community, revealing a deep rift between two intensely hostile camps — the one that denounces Elon as a sex maniac and a false messiah, and the other that idolizes him as a hallowed saint, the light of the generation.