For more than a decade, a unique Israeli forum composed of religious leaders, legal experts and mental health workers has quietly dealt with allegations of sexual misconduct. 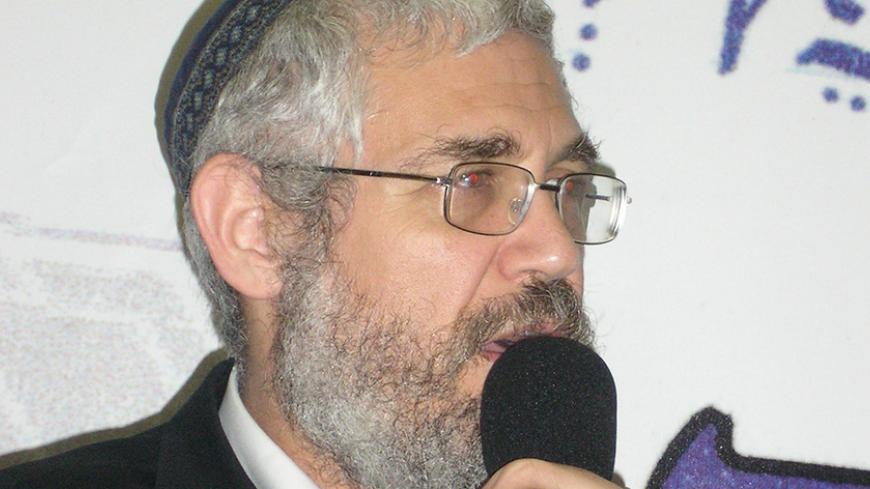 Rabbi Motti Elon speaks at a public event, May 11, 2006. Elon was convicted of two counts of sexual assault against a male minor on Aug. 7, 2013, after the Takana Forum made public students' recurring complaints of sexual harassment. - Shalom/Wikimedia Commons

For quite some time now, complaining to the legal authorities has seemed to no longer be a necessary step in the public investigation of such matters. The complaints traditionally filed with the police are now often replaced by social media posts. One apt example is the Facebook page One Out of One, to which testimonies by women who have been sexually harassed are posted.

For the past 13 years, the Takana Forum has been operating quite discreetly in the national-religious community. "Takana" means both a rule and a remedy, and the forum addresses complaints against authority figures wielding power in the religious sector — spiritual leaders, influential officials or educators.

The forum typically appoints three or four of its members to handle reported harassment complaints. In each case, a panel of forum members hears the accused's side as well as the accuser's, and decides if and what sanctions to impose.

"The idea is to keep away the potential source of harm," Judith Shilat, the forum director and co-founder, told Al-Monitor. "If the respondent cooperates, he takes his punishment or complies with our decision and removes himself from the position of power that was misused. If he fails to do so, we inform the management of the institution where the harassment or abuse took place, so that he would be removed from any position of authority.”

"This is a significant step forward, that religious Zionism leaders have come to understand the complexity and to realize how common it is," forum member Leah Wiesel told Al-Monitor. Wiesel, an attorney and lecturer at the religious Orot Israel Academic College of Education, added, "It comes as a shock to anyone exposed firsthand to the issue of sexual harassment. The religious community has experienced a change of perspective and come to acknowledge the issue and the need to address it, and to realize the intolerable injury involved. In the past, I couldn’t believe that such things were actually happening, but now I believe it all.”

Wiesel noted that while the issue of sexual harassment was once virtually ignored in the national-religious community, over time, the sector has come to realize that the problem exists and must be addressed. Shilat said, "A series of harassment affairs in educational institutions in the sector exposed in the early 2000s sparked a heated controversy in the religious community, culminating in a bitter rivalry. We are talking here about rabbinical figures rumored to have been involved in improper conduct — unacceptable in any society and all the more so in the religious community. It is such a sacred issue with us that people just could not believe it was happening."

Hannah Kehat, from the Orthodox feminist religious organization Kolech (Your Voice), which was involved in setting up the Takana Forum, described the acrimonious battles over two affairs in which well-known rabbis were implicated. “Wall posters lambasting the women complaining of harassment were hung all over. Community rabbis upheld declarations depicting the complainants as mentally ill. Followers of the rabbis involved waged an aggressive public campaign against the complainants and their supporters,” she recalled.

According to Kehat, eventually, after the Labor Court intervened in favor of the complainants and endorsed the dismissal of one of the educators concerned, rabbis in the community realized that the issue at stake was their stance on sexual harassment and recognized the need to create a system for dealing with the issue.

Several organizations joined forces and formed the Takana Forum. Shilat explained, “It was important that all spiritual-ideological currents of religious Zionism be given a voice, so as to ensure the supreme authority of the panel hearing a case over the implicated individual.”

Over the course of two years, the forum's members — leading rabbis, jurists and mental health practitioners, men and women alike — underwent training preparing them to deal with sexual harassment. “We had to learn the language. The training sessions touched on all areas of treatment,” said Shilat.

To date, panels assigned by the forum have handled dozens of cases consisting mostly, but not only, of complaints by women against men. “I have also happened to deal with complaints against women,” Wiesel recounted. “The response is the same in both cases, as the way advantage is taken by an authority figure is invariably the same.”

The forum takes care to maintain absolute discretion. Only the panel members who hear a complaint are privy to the case details. However, in the exceptional case of students’ recurring complaints against Rabbi Motti Elon — and following repeated violations of the agreements reached with him to refrain from any contact with students — the forum decided to publicize the affair and reveal his name in 2010. Ultimately, the exposure triggered a police investigation that ended in conviction, and Elon was handed a suspended sentence and community service.

The forum's handling of the case prompted harsh internal criticism and the withdrawal of the Kolech organization over claims that it had failed to deal with the matter in time. “Given the key position of the rabbi concerned, we sought to secure broad agreement on dealing with the case, and it took us some time," law professor and co-founder Yedidia Stern told Al-Monitor. “Reaching agreement had its price, but I believe that given the circumstances, now that he is removed from power and no longer in the public eye, we did achieve something after all.”

Broad agreement is key to the forum's success. “The community is deeply divided over an array of issues,” Wiesel said, “and here we have one issue that unites community leaders with completely different world views. This is nothing less than the fulfillment of a prophetic vision."

Despite appearances, the Takana Forum does not purport to fill the role of the state. Before the forum was set up, Stern had appealed to the attorney general seeking the approval of law enforcement agencies. "We make it clear to complainants that the way to go about it is to file a complaint with the police," Shilat said. She added that many of the complainants are concerned about possible police investigations and prefer appealing to the forum for help. Be that as it may, each complaint is first submitted to the attorney general, who is asked for his approval to handle it. Only when no criminal offense is involved or when the complainant is unlikely to lodge a complaint with the police does the forum get the green light to proceed.