US Should Heed Russia, Include Iran in Syria Talks

Russia is asking the US to include Iran in the upcoming "Geneva II" conference on Syria, a move that could also benefit the stalemated nuclear talks. 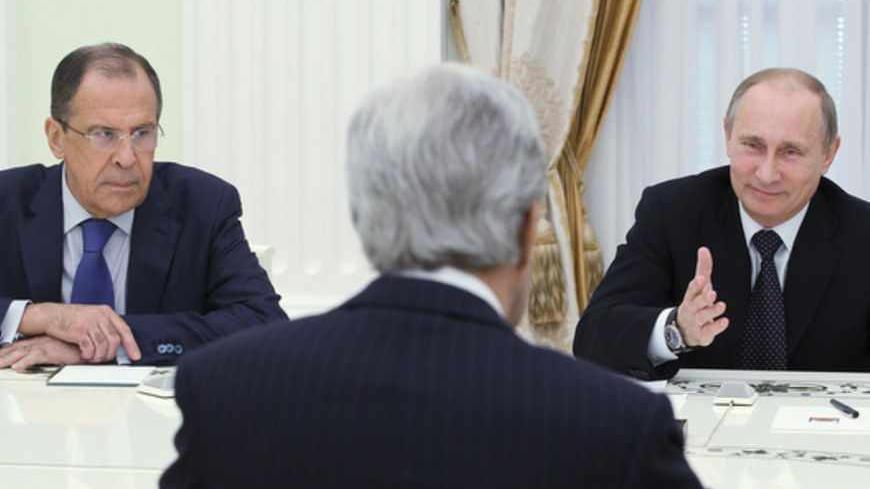 After opposing the inclusion of Iran in negotiations over Syria for more than two years, the administration of US President Barack Obama may finally decide to change course.

Secretary of State John Kerry, appearing on Wednesday, May 15, at a press conference in Sweden with counterparts from Sweden and Russia, stood silently while Russian Foreign Minister Sergey Lavrov emphasized the need to mobilize support for new peace talks “by all the Syrian groups, the regime and all opposition groups and second, by those outside actors who have influence on either one or the other Syrian group.”

On Thursday, Lavrov said that Iran is “a very important external player” that should not be barred from Syria negotiations because of Western “geopolitical preferences.”

The US has not yet announced who will be invited to the conference. However, State Department spokesperson Jen Psaki, pressed Thursday on whether Iran would be invited,  waffled and told reporters, "We are not ruling [Iranian participation in peace talks] in or out."

Al-Monitor’s Week in Review has since last year extensively presented the strategic rationale and opportunities for a diplomatic approach to the Syria crisis that partners with Russia, recognizes Iran’s leverage with Syrian President Bashar al-Assad and picks up Iran’s offer to the five permanent members of the UN Security Council plus Germany (P5+1) to discuss regional cooperation on Syria — a proposal that, if accepted, could help unlock the stalemated nuclear negotiations. By doing so, the United States would be offering a confidence-building measure that recognizes Iran’s influence, thereby showing Iran that it does not need to become a nuclear-weapons state to be acknowledged as a regional power.

A year ago, then-secretary of state Hillary Clinton was emphatic in dismissing any role for Iran in resolving the Syria crisis. She told an audience at the Brookings Institution that including Iran in talks was a “red line for us … We thought that would be a grave error since we know that Iran is not only supporting the Assad regime, but actively mentoring, leading, encouraging not merely the regular army, but the militias that are springing up, engaging in sectarian conflict.”

A year later, however, the conflict has only become more bloody and destabilizing as opposition groups fracture and multiply. The United States is providing nonlethal aid directly to the Free Syria Army, Arab countries are arming the rebels and Russia and Iran are continuing to provide advanced weaponry to Assad forces. Still, the United States, Russia and Iran might share an interest in blunting the growing power of jihadist groups in Syria.

The notion that Iran could be prevented from influencing the outcome in Syria has always been far-fetched, given its historic ties with the Assad regime going back to the 1980-88 Iran-Iraq war, when Syria was the only major Arab country — and one of the few countries in the world — to back non-Arab Iran. Iran and Syria also collaborated in shaping and supporting the Lebanese Shiite militant group Hezbollah and Syria has served as a conduit for Iranian weapons and money bound for Lebanon.

After the death of Assad’s father, Hafez, in 2000, Iran became the dominant partner in the Syria-Iran alliance — a relationship that has become pivotal to the survival of the Syrian regime in the past two years. Iran is bolstering Assad with money, weapons and military and intelligence advisers, but also recognizes that Assad himself may have to go to create a successor government that preserves any vestige of the existing state.

Excluded by the United States from major international forums on Syria, Iran has tried to carve out a place for itself in regional diplomacy by reaching out to Muslim Brotherhood-led Egypt. Iran’s Arabic-speaking Foreign Minister Ali Akbar Salehi has been particularly energetic, visiting pro-Western Sunni countries such as Jordan and Saudi Arabia that have backed the Syrian opposition against Assad.

While in Jeddah recently attending a conference nominally about the Mali crisis, Salehi met with his Saudi counterpart, Prince Saud al-Faisal. In an interview with Al-Hayat, Salehi warned against the dangers of Syria unraveling into ethnic enclaves — a development that could menace Iraq, Turkey, Iran and even Saudi Arabia if sectarianism escalates unchecked.

“If any political vacuum or partitioning were to occur in Syria, then this crisis would spread to all the countries of the region. We have enough problems in the region, and we don’t want to see these problems getting worse for these countries; on the contrary, we must alleviate them,” Salehi said. He added that “the crisis requires that the government and opposition sit at the negotiating table and form a transitional government, after which voting on a new constitution can occur.”

At a meeting last summer in Geneva co-hosted by Russia and the United States, both Saudi Arabia and Iran were excluded. Both should be present at the next set of talks.

If Saudi Arabia, which has made no secret of its opposition to Iranian policies in the region, can talk with Iran about Syria, then why not the United States, which is already participating in negotiations with Iran about the nuclear issue?

The late Palestinian leader Yasser Arafat was fond of saying that trying to exclude the Palestine Liberation Organization from discussions about the fate of the region was like trying to cover the sun with your fingers.

A new peace initiative may well fail, even if all the parties are represented, given the divisions that have deepened as the death toll in Syria passes 80,000 and instability spreads into Lebanon, Jordan and Turkey. Peace efforts will surely fail, however, if those with deep interests in the outcome of the conflict are prevented from taking part.