US Exclusion of Iran on Syria Threatens Syria, Nuclear Talks

The Obama administration’s decision to cut Iran out of a group trying to resolve the Syria crisis may backfire, writes Barbara Slavin, encouraging Tehran to sabotage a post-Assad government and also undermining nuclear talks. Iran has shown time and again that if it is excluded from the regional security order, it will seek to undermine it. 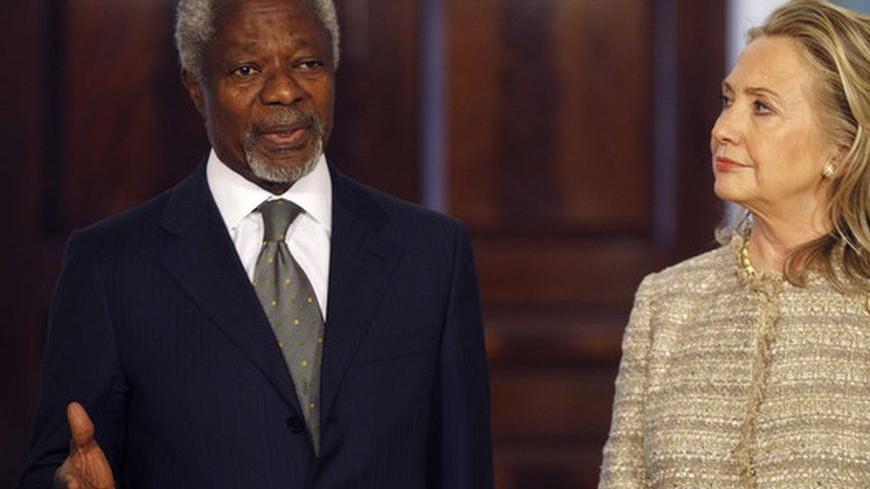 US Secretary of State Hillary Clinton (R) and Arab League Joint Special Envoy for Syria Kofi Annan make their statements to the media before their meeting June 8, 2012 - REUTERS/Gary Cameron

The Barack Obama administration’s apparent decision to cut Iran out of a multilateral group trying to resolve the Syria crisis may backfire, encouraging Tehran to sabotage any post-Assad government and also undermining nuclear talks with Iran.

The US gave its most explicit rejection of Iranian participation Tuesday, June 12 when Secretary of State Hillary Clinton said she turned down the suggestion of UN envoy (and former UN Secretary-General) Kofi Annan that Iran be part of a contact group including Syria’s neighbors and the permanent members of the UN Security Council.

“The red line for us was the inclusion of Iran,” Clinton told an audience at the Brookings Institution. “We thought that would be a grave error since we know that Iran is not only supporting the Assad regime, but actively mentoring, leading, encouraging not merely the regular army, but the militias that are springing up, engaging in sectarian conflict.”

At the same time, the US is working overtime to woo Russia to support a transition to President Bashar al-Assad. Clinton has spoken multiple times to her Russian counterpart, Sergei Lavrov, about a Yemen-like solution for Syria and she sent a special envoy, Fred Hof, to Moscow last week. Deputy Secretary of State Bill Burns is due to meet with senior Russian officials while in Afghanistan today (June 13).

Yet Russia, a longtime ally of Syria, has been providing heavy weaponry to the Syrian military to crush the opposition. Clinton said Tuesday (June 12) that there are even “attack helicopters on the way from Russia to Syria, which will escalate the conflict quite dramatically.”

Annan spokesman Ahmad Fawzi told Colum Lynch of Foreign Policy magazine Tuesday that it would be better to include Iran in Syria diplomacy than to try to shut it out. “Iran is a key player in this crisis and if you’re going to have a group that talks about what can be done to pressure the parties in Syria, then you can’t neglect the fact that Iran has influence on the Syrian government,” Fawzi said.

State Department spokesmen have gone through verbal and logical gymnastics to try to explain the differing treatment of Russia and Iran.

At a briefing last Friday (June 8), spokesperson Victoria Nuland said the US is talking to Russia and not Iran about Syria because “the Iranians are bragging publicly about the advice, the material support, the techniques and tactics that they have been providing the Syrian regime,” while “with the Russians, the issue is a question of how best to end the violence.”

The real reason for the diplomatic outreach to Moscow and the hardball with Tehran is that Russia is a permanent member of the UN Security Council and thus can veto the sort of resolution the Obama administration would like to obtain before intervening more forcefully in Syria. Iran has no such power. Russia also holds the key to squeezing Iran over its nuclear program, a bigger priority for the Obama White House in an election year.

While this double standard is understandable, it could backfire and jeopardize efforts to resolve both the Syrian crisis and the dispute over Iran’s nuclear program.

As despicable as Iran’s intervention on the side of Assad’s killing squads may be, Iran has major interests in Syria that cannot be ignored. An Iranian ally for more than three decades, Syria is a conduit for Iran to aid Hezbollah in Lebanon and a base Iran has used to support Palestinian militants. Iran, as the largest majority-Shiite nation, also identifies with the Alawite Assad regime and with Syria’s Alawite minority.

US diplomats have included Iran in discussions about other countries — most recently Iraq and Afghanistan — where Iran also has major national-security interests and an ability to shore up or sabotage stability.

The late US envoy Richard Holbrooke met with a senior Iranian diplomat at a conference in the Netherlands in 2009 about Afghanistan. The then-US ambassador to Iraq, Ryan Crocker, met twice with his Iranian counterpart in Baghdad in 2007, after which attacks on US forces by Iraqi Shiite militias diminished.

No one can guarantee that Iran will not continue to play a dual game in Syria. But it will have little incentive to jettison Assad — or to back a successor — if the US persists in its efforts to deprive Iran of a role in a country that has been its chief Arab ally for more than 30 years.

Such a policy could spill over into nuclear talks which are due to reconvene in Moscow next week (June 18-19). In a five-point counterproposal put forward in Baghdad last month, Iran asked for discussions on regional security issues as well as for sanctions relief and recognition of its right to enrich uranium for peaceful purposes.