On the heels of US Secretary of State Hillary Clinton's statement that Iran will be offered "a diplomatic way out," Andrew Parasiliti writes that the US should indeed recognize Iran’s right to enrichment and accept Iranian offers of cooperation, saying that there's no downside to President Obama going all out on Iran. 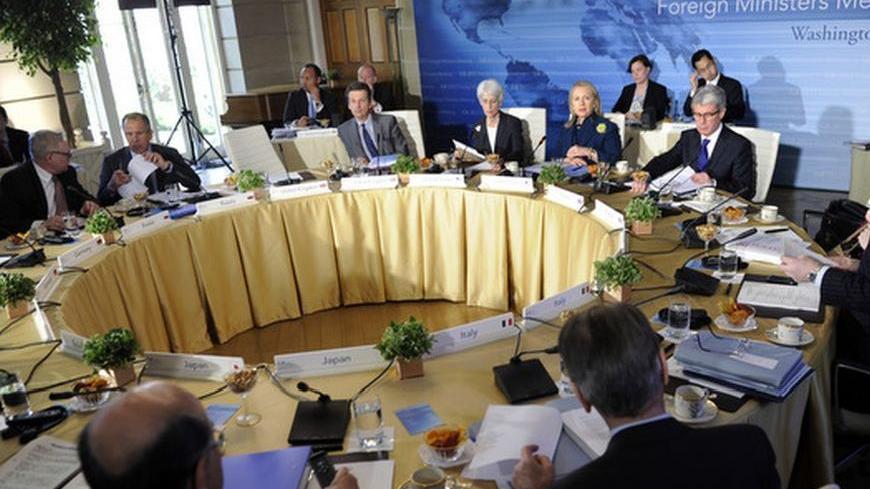 US Secretary of State Hillary Clinton (back C) makes opening remarks at the Plenary Session of the G-8 Foreign Ministers Meeting at Blair House in Washington April 11, 2012. - REUTERS/Mike Theiler

US Secretary of State Hillary Clinton encouraged speculation this week that the US may be preparing to "go big" on Iran when she said that Iran will be offered "a diplomatic way out, a very clear path that would be verifiable and would be linked to action for action" when nuclear talks resume in Moscow June 18-19.

The US should indeed "go big" by recognizing Iran’s right to enrichment, accepting Iranian offers of cooperation in regional trouble spots, and making explicit that Iranian transparency on its nuclear program would lead to the lifting of sanctions.

First, Iran’s "right" to enrich uranium, in the context of a civilian nuclear program, has become fused with Iranian national honor. This may strike some as puzzling, but it cannot be swept aside. UN Security Council resolutions call for Iran to suspend enrichment-related activities, but Iran rejects this demand. The P5+1 — the five permanent members of the UN Security Council and Germany — and Iran have sought to thread the needle through what was originally known as the "fuel swap" proposal to support Iran’s nuclear medical research. In Baghdad last month, the P5+1 proposed Iran cease enrichment at 20%, ship out its stockpile of 20% enriched uranium, and halt operations at the Fordow uranium-enrichment facility near Qom. In return, Iran would be allowed some civil nuclear cooperation, isotopes for its nuclear medical reactor and spare parts for its civilian aircraft.

To close the deal and advance the negotiations, the P5+1 could recognize Iran’s right to enrichment in the context of Iran being a signatory to the Nuclear Nonproliferation Treaty (NPT) and freeze all pending sanctions on Iran. Additionally, the P5+1 might request a good-faith strategic pause in enrichment while Iran resolves outstanding questions about its nuclear program, which would lead to the removal of those related UN sanctions. Iran should understand that its right to enrichment is not the issue; it is specific, documented concerns about its nuclear program, such as compliance with the International Atomic Energy Agency Safeguards Agreement and ratification of the Additional Protocol that need to be addressed. Framing the request in the context of Iran’s adherence to the NPT, rather than in response to UN Security Council resolutions which Iran rejects, might facilitate Iranian cooperation.

Second, the US should accept Iranian offers for bilateral or multilateral engagement on Afghanistan, Iraq and Syria. The US has vital interests in all three countries. If Iran can play a helpful role, the US should welcome it, including Iran’s participation in a contact group on Syria, as has been suggested by Kofi Annan, the UN Special Envoy to Syria. While regional security should not be on the agenda in the P5+1 talks, it can and should be picked up in other forums, including direct talks between Washington and Tehran.

Third, the P5+1 could offer a roadmap for lifting US and EU sanctions in return for Iranian cooperation on its nuclear program. No new sanctions should be imposed as long as Iran is negotiating in good faith. There should be no illusions about the removal of US congressional sanctions, which are complicated to unwind. Many of them can only be lifted once the president certifies that Iran no longer supports terrorism; has ceased its nuclear, biological, chemical and missile programs and does not constitute a threat to the US and its allies. The US law barring foreign banks from doing business with the US if they do business with sanctioned entities in Iran, as well as some nonproliferation-related sanctions, require congressional repeal or amendment. However, there are numerous Executive Orders which could be reversed solely through presidential action. The US should lay out the benchmarks, timetable and sequencing for each of these steps, and test if Iran, too, is willing to "go big" in taking all necessary steps to verify that its nuclear programs are purely for civilian purposes.

There is no downside to President Obama "going big" on Iran. Iran will not tilt the balance in any "battleground" state in the US presidential election in November. A sustained diplomatic track with Iran, however, would be a potential windfall for the US, Iran and the region. On the other hand, Iranian equivocation in the negotiations or a diplomatic failure could increase the likelihood of an Iranian nuclear weapon and yet another regional conflict, at a time when the US is winding down its combat operations in Iraq and Afghanistan. "Going big" would put Iran to the test regarding both its commitment to diplomacy and its nuclear ambitions.

Andrew Parasiliti is executive director of the International Institute for Strategic Studies-US and a board member of Al-Monitor.