The Iran nuclear talks scheduled for next week will fail if the the West and Iran do not put a stop to the chicken-and-egg game, writes former Iran nuclear negotiations spokesman Seyed Hossein Mousavian. The West should stop sanctions set to go in effect in July and Iran should agree to confidence-building measures about its uranium stockpile. 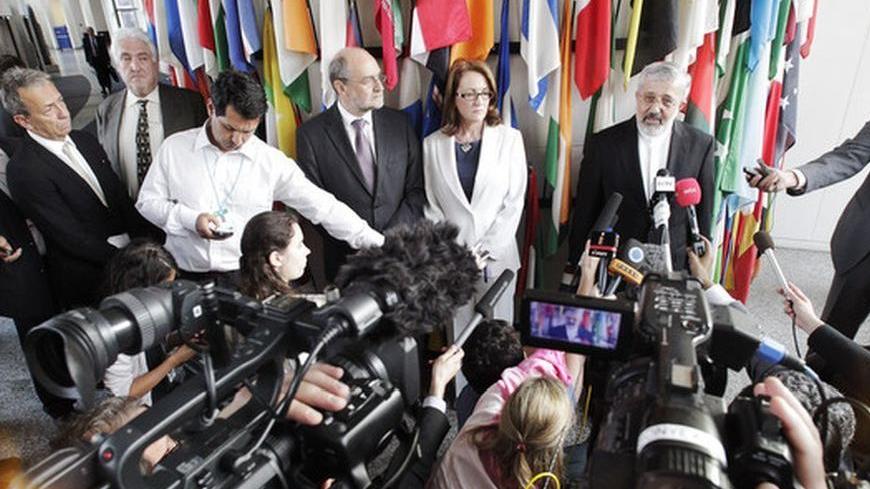 IAEA representatives after talks at the UN headquarters in Vienna June 8, 2012. The U.N. nuclear watchdog and Iran began a new round of talks. - REUTERS/Herwig Prammer
June 15, 2012

The countries that make up the P5+1 (United States, Russia, France, Britain, China and Germany) consider Iran a major threat to non-proliferation and international peace and security. At the same time, these countries, which collectively possess more than 98% of the world’s nuclear weapons, admit that Iran neither possesses a single nuclear bomb nor has made the decision to make one.

Iran’s nuclear capability has remained the number one political dilemma of the US and Western powers for the past decade. The P5+Germany and Iran have failed to reach consensus about Iran’s nuclear program, and will continue to do so as long as the West continues to try to solve the Iranian nuclear dossier by going beyond the framework of the NPT.

While the situation seemed to be improving after the April 14 meeting in Istanbul, things fell apart in the follow up May 23-24 meeting in Baghdad when major differences arose from the content and application of the step-by-step plan initially agreed to in Istanbul. While each side presented a proposal to resolve its concerns, the meeting in Baghdad concluded without any concrete agreement, other than agreeing to continue negotiations in Moscow  June 18-19.

The Moscow talks will also fail unless the following issues are resolved:

1. Both parties should agree on simultaneous reciprocity of “rights and responsibilities” within the framework of a step-by-step plan, ending this chicken and egg game.

Since 2003, the primary impediment to success of the nuclear talks has been the West’s reluctance to recognize the legitimate rights of Iran for enrichment. The West maintains that under the NPT, such “rights come with responsibilities,” and interprets this to mean that Iran must first address all the West’s concerns before the West considers Iran’s legitimate right to enrich. In practice, this means that Iran would have to suspend enrichment for an indefinite period while it waits for the West to make up its mind about enrichment. As I explain in detail in my new book, Iranian Nuclear Crisis, A Memoir, Iran will never accept this condition, regardless of increased sanctions or even military action.

Meanwhile Iran maintains that under the NPT, “responsibilities come with rights.” That is, Iran argues that the rights come first, and once its rights to enrich are recognized, Iran would respect the required responsibilities regarding the maximum level of transparency.

To end this impasse, the P5+1 should recognize the rights of Iran for enrichment and Iran should simultaneously sign the draft, tentatively agreed on with the International Atomic Energy Agency (IAEA) on May 21, to address all the IAEA’s technical questions. The signing of the IAEA agreement means that the Iranians would not only adhere to the IAEA Additional Protocol, but also address issues pertaining to possible military dimensions. Based on international norms, this is the maximum level of transparency Iran can adhere to in order to reach a compromise with the P5+1.

2. Iran should embark on confidence-building measures related to its 20 percent enrichment level and not stockpile beyond the amount it domestically needs, while the Western powers should remove sanctions, including those on oil and the Central Bank scheduled to take place July 1.

The second key issue that impeded the talks in Baghdad was that Iran and the P5+1 were very far apart in their proposals to address Iran’s 20 percent enriched uranium. In my four-step plan, originally published in the Boston Globe on March 31, I offered a plan much like what Iran proposed. The P5+1, on the other hand,  expected Iran to halt 20 percent enrichment and export its entire stockpile of enriched uranium in exchange for spare parts for civilian planes and a delay of sanctions targeting insurance mechanisms for Iranian shipping lines for six months. As I noted in an interview earlier this month with Christiane Amanpour on CNN, this amounts to “diamonds in return for peanuts.”

The West should recognize that multilateral and unilateral sanctions have cost Iran tens of billions of dollars during President Mahmoud Ahmadinejad’s era; in turn, Iran’s major outcome has been 20 percent enrichment and its stockpile. With this reality, how does the West expect Iran to give up on its asset in return for spare parts for civilian planes? Instead, the US and the Europeans should lift such sanctions on humanitarian grounds and not make this issue a hostage to the nuclear negotiations. Confidence-building measures on 20 percent enrichment by Iran requires appropriate reciprocation by the P5+1 on loosening sanctions.

At the end of the day, the West must tone down its rhetoric and actions regarding sanctions, which it clearly believes are working. As a Western diplomat engaged in the Baghdad talks stated, “the world powers would not offer to relax existing sanctions or postpone other restrictions due to come into force.”

Although the West and Israel claim that Iran is buying time in these negotiations, instead it is the West’s strategy to delay a face-saving solution to the nuclear impasse by having the sanctions take more effect and bring Iran to its knees. This is another strategic miscalculation that I have been emphasizing to the international community; in my recent interview with David Ignatius in his Washington Post op-ed, he concluded that Iran “won’t make major concessions under threats…recent efforts to constrain Iran haven’t worked.”

Yet US Secretary of State Hillary Clinton said last month, “As we lay the groundwork for these talks, we will keep up the pressure. All of our sanctions will remain in place and continue to move forward during this period.” In an election year, US officials are cautious not to antagonize Israel, the American Israeli Public Affairs Committee and the Republican Party — hence the rationale behind Clinton’s statement. Such a strategy is exactly the reason for the failure of Baghdad; if this trend continues, it is inevitable that Moscow talks will also fail.

Another reality check is that although the sanctions are harming the civilian population, the latest report of the IAEA shows Iran has made considerable progress in enrichment capability, in terms of the number of centrifuges and stockpile of enriched uranium. This is proof that time is not in favor of the P5+1.

To reach a constructive outcome in negotiations, therefore, the West has to accept a realistic and proportional reciprocity within a step-by-step plan that includes a gradual removal of sanctions. In return, the Iranians would ensure confidence-building measures are taken. Only then will the Moscow talks be successful. The US and its allies should recognize that a face-saving resolution to Iran’s nuclear dilemma could open the door to vast implications on an array of broader regional issues, where Iran’s clout in the region can lead to constructive developments on security and stability of the region and beyond. That said, it is time for the world powers to re-orient their dual-track policy of “diplomacy and pressure” into one that incorporates this wider vision based on the pursuit of “trust and cooperation.”

Further talks are not going to produce anything of strategic significance unless the US substantially alters its approach. The road to Moscow is through Washington.

Ambassador Seyed Hossein Mousavian is a research scholar at Princeton’s Woodrow Wilson School and a former spokesman for Iran’s nuclear negotiators. His latest book is titled The Iranian Nuclear Crisis: a Memoir.