The P5+1 and Iran should reset the agenda to include a compromise statement on Iran’s right to enrichment, a roadmap for the lifting of UN, EU and US sanctions, and urgent discussion of regional security matters, including Syria. 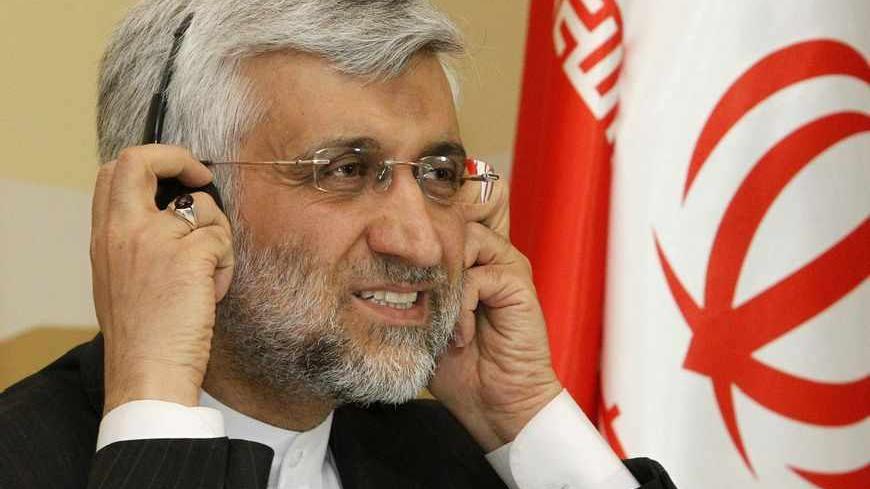 The nuclear talks between Iran and the P5+1 (representatives of the five permanent members of the UN Security Council and Germany, led by the European Union) held in Kazakhstan April 5-6, ended with a familiar refrain: Iran unwilling to concede to the West’s demands on its nuclear program absent both recognition of its right to enrich uranium and a roadmap for the lifting of sanctions.

Al-Monitor’s Laura Rozen covered the Almaty talks, which were reportedly more detailed and substantive from previous meetings, including a “30–45-minute back and forth between the lead US negotiator at the talks, Undersecretary of State for Political Affairs Wendy Sherman, and Iran’s lead negotiator, Saeed Jalili, in which Sherman asked Jalili a series of specific questions and he responded."

While some may consider it "progress" that the US and Iran are talking across a large table about their familiar positions on the nuclear file in a forum that began in 2006, it might instead be time to acknowledge the obvious: The current framework for negotiations is failing.

While it may be baffling that the so-called right to enrichment has become a cause celebre for Iran, it is equally bewildering that until now the P5+1 and Iran have been unable to draft a compromise statement that allows Iran to save face and gets the negotiations over this hurdle. The elements are all there: Iran has a right to enrich as a signatory to the Nuclear Non-Proliferation Treaty (NPT), in the context of Iran’s full adherence to the NPT, as verified by the International Atomic Energy Agency (IAEA) — Ayatollah Ali Khamenei himself noted the IAEA's role on March 21; recognizing Khamenei’s fatwa not to develop nuclear weapons; and Iran’s willingness to pause enrichment while the NPT safeguards procedures ("confidence-building measures") are put in place.

In the days before "21st century diplomacy," diplomats would begin drafting a statement in some back room during an uneventful plenary. No doubt the P5+1 plenaries are uneventful; we need some old-fashioned backroom diplomacy.

That Iran would seek a roadmap on sanctions beyond a vague promise about sanctions relief should be neither a surprise nor an unreasonable expectation; it is also in the US interest that such a discussion should be at the core of the negotiations.

For most US congressional sanctions to be lifted, including those under the Iran Sanctions Act, the president must certify that Iran neither supports terrorism nor poses a "significant threat" to the United States and its allies, in addition to Iran not seeking to acquire nuclear as well as biological and chemical weapons and related missile delivery systems.

In other words, US sanctions can only be lifted in the context of a broader discussion of Iran’s role in the region — the nuclear and regional security files are linked in US sanctions law.

So dealing with Iran on Syria and other regional matters is not just a sop to Iran. Both Washington and Tehran would benefit from a practical discussion of the steps required to address US security concerns in the Middle East and get sanctions lifted.

Iran formally proposed strengthening cooperation on regional security, including Syria and Bahrain, in Moscow in June 2012, but the P5+1 has yet to take up the offer.

In the meantime, Syria suffers from a costly sectarian war that is now a regional crisis and a humanitarian catastrophe. This column has argued that Iran, which has unmatched influence with the Syrian government, can be pivotal in a political outcome to end the violence.

In an article this week, Seyed Hossein Mousavian calls for the P5+1 and regional powers to initiate a seven point plan to prevent the collapse of Syria.

Javier Solana, former secretary-general of NATO and previously foreign policy chief for the European Union, warned in Washington that Syria may soon divide and undermine the P5+1, as reported here by Barbara Slavin.

The crises in the region — in Syria, Bahrain, Iraq, Afghanistan, Lebanon, to name a few where the United States has interests and Iran has influence — should be catalysts for urgent dialogue with Iran. That the P5+1-Iran talks have so far been limited to the nuclear file, with the region in such crisis and despair, should be setting off alarms that a new approach is required.