With Lebanon waiting for the prime minister-designate to form a government and Hezbollah engaged in the Syrian civil war, Beirut's political factions are maneuvering for position, writes Elie Hajj. 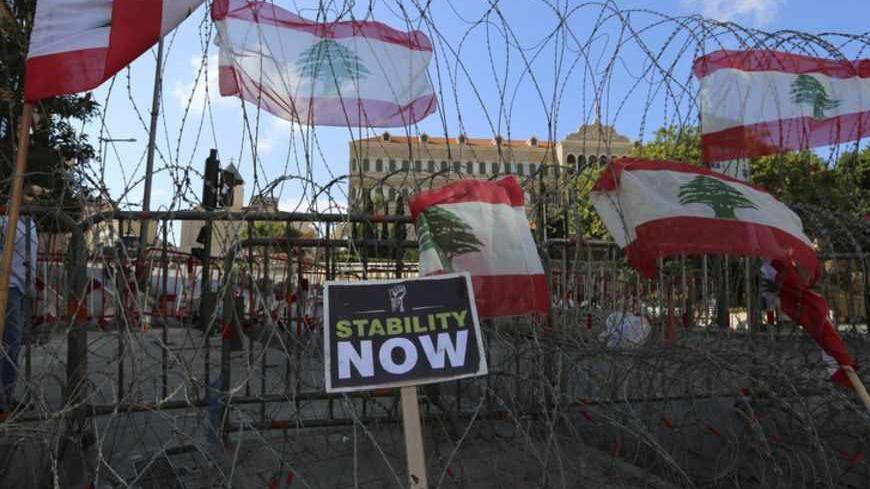 It seems the forces aligned against Hezbollah rushed to denounce the words of its leader, Hassan Nasrallah, after his televised speech on April 30. Looking a little deeper, they then developed worries that prompted former minister Mohammed Shatah, adviser to former prime minister Saad Hariri, to ask who among the Shiite community could extend a hand to the rest of the Lebanese people for a meeting on common ground. Such worries are surfacing as alienation among the Lebanese appears to be on the rise, preventing a new government from being formed and delaying parliamentary elections, with no hope of holding them even after a six-month postponement.

Speaking to Al-Monitor before Nasrallah's speech, Shatah predicted that the Hezbollah leader would reduce the impact of his organization's intervention in the Syrian conflict and engagement in battle on the side of the Bashar al-Assad regime. His prediction was incorrect. Opponents of Hezbollah and Iran are now convinced that the Islamic republic, which sees itself as the protector of Muslim and Christian minorities in the region, is trying to consolidate its bases in Iraq, Syria and Lebanon.

These same opponents point out that Nasrallah’s annoucement of his now quite clear position, following a period of confusion, was issued after a meeting with Ayatollah Ali Khamenei, the supreme leader of Iran, in Tehran. Some believe that the situation in Syria has become a factor in the Iranian presidential elections, scheduled for June. If Assad survives, the hardliners in the Iranian government could add an extra element of power to their position. If not, the Iranian opposition could count his loss to their advantage.

These members of the political opposition thought that something could be done to faciliate some disentangling among Syria, Iraq and Lebanon: first, through a new Lebanese government, to be announced by Prime Minister-designate Tammam Salam, who is seen as favoring the March 14 coalition; second, through parliamentary elections, even though they would be held under the 1960 electoral law rejected by Christians allied with Hezbollah, at least publicly; third, through the adoption of the Baabda Declaration — stipulating that Lebanon not become involved in the armed conflict in Syria — announced by President Michel Suleiman, who is keen to implement it.

With the above in mind, Shatah and his associates raised their voices, as the founder and president of the Kataeb Party used to do in the past when needing a Muslim interlocutor during Lebanon’s civil war (1975–1990). This time, a Shiite interlocutor is required to agree, if necessary, on proceeding in fulfilling the Hezbollah-led alliance’s demand to form a government. Yet, an agreement would presuppose Hezbollah's withdrawal from Syrian affairs, which is out of the question. At the same time, it would not be wise to bet on Hezbollah followers rejecting the party’s defense of the Assad regime or opposing directives of the party leadership?

Fares Soueid, coordinator of March 14, told Al-Monitor that reliance on Salam to form a government that does not please Hezbollah confirms the government's deficiency. Hezbollah is increasing its demands, after endorsing Salam to form a government. Such a man, who tells the media that he is optimistic about forming a government week after week, would never place anyone, including state officials (i.e., President Suleiman) before their responsibilities. He would present the government, which will be handed over and will manage the ministries, if Suleiman agrees.

Even though that government will later be brought down by pressure from Hezbollah and the Syrian regime, it will continue to handle business until another government can be formed. This was the alternative to allowing the caretaker government of Prime Minister Najib Mikati, dominated by Hezbollah, to assume this mission, according to the Hezbollah opponents, thus depriving Hezbollah legitimate cover to intervene in Syria. Yet Salam is not the adventurous type, so Lebanon will remain without a government for the foreseeable future. What can the opposition members do in this quagmire and disruption in the balance of power?

According to some, the only option available for Lebanon is to cut its losses. The question is at what cost? So far, opposition forces do not appear to have an answer to this question. Thus, Lebanon, despite the anxiety of officials, will continue with its power vacuum, which can only be filled with another vacuum, in the government and parliament, and probably all leading security and military positions in the coming months.