Hezbollah Secretary-General Hassan Nasrallah is basing his involvement in the Syrian war on grounds that are both religious and having to do with the conflict with Israel, writes Jean Aziz. 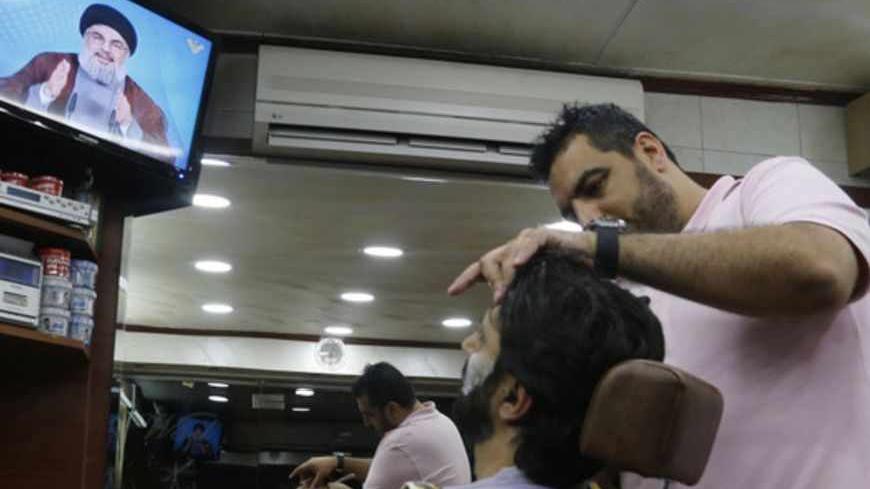 Over the past two days, Beirut has been busy pondering a key question: Why did Hezbollah Secretary-General Hassan Nasrallah choose to give a speech this week, after he had been scheduled to make a televised appearance to Hezbollah media, from an unknown location, on May 9? What recent developments made it necessary reschedule the speech to April 30?

On that evening, Hezbollah’s secretary-general said that his speech was moved forward because the issues are too numerous and complex to be covered in a single speech and because the issues are of two types: Some are purely Lebanese while others are foreign-linked. He decided to address the purely Lebanese issues on May 9 and the foreign-linked ones on April 30.

However, circles in Beirut close to Hezbollah said that there were additional reasons:

One is the issue of Hezbollah members, or Lebanese Shiite gunmen, fighting in Syria. That issue had become the subject of deep and serious discussion at various levels, especially in the Lebanese Shiite arena, including within Hezbollah. Since that problem appeared, Hezbollah kept promoting its version of the events. Hezbollah’s version is two-pronged: 1) Hezbollah, the No. 1 Shiite organization in Lebanon, is defending Lebanese citizens living in Lebanese villages located near the northeast corner of Lebanon. Those villages lie inside Syria as a result of the unclear border line between the two countries. The border there has been unclear since the two countries were formed in 1920s. 2) Hezbollah is protecting Sayyeda Zeinab’s shrine in Damascus’ eastern suburbs. That shrine is particularly revered by Shiites.

However, that party narrative was insufficient to end the controversy, especially after the battles in Qusayr over the past two weeks and after fundamentalist Salafist sheikhs in Lebanon issued religious edicts calling for a Sunni “jihad” against the Shiite involvement in Syria. Thus, the two major Muslim sects may be slipping into war in Syria and Lebanon.

On that point, Beirut circles familiar with Hezbollah’s thinking said that Nasrallah addressed his supporters to assert that the war he is waging — in Sayyeda Zeinab’s shrine, Qusayr, and of course in south Lebanon — is legitimate. That legitimacy rests on three grounds:

First, that the war on Syria aims to liquidate the Palestinian cause and thus the war falls within Hezbollah’s doctrine of fighting Israel.

In effect, Nasrallah said to both his supporters and opponents that when former Lebanese Prime Minister Saad Hariri started arming the Syrian opposition, and when Hariri appointed one of his MPs to represent him with the jihadist and takfiri groups in Syria, and when Lebanese Shiites returning from a religious pilgrimage in Iran were kidnapped in Syria on the Turkish-Syrian border last year, and when the arms shipments to the Syrian opposition were coming through the Tripoli port, and when dozens of Lebanese Sunni fundamentalists were ambushed when infiltrating Syria from northern Lebanon to fight alongside Jabhat al-Nusra, Hezbollah was not yet involved in Syria, as it is today in a limited way. So Nasrallah was telling his supporters that he is in a position of self-defense and is defending his people, or at least was counterattacking a push to eliminate Hezbollah.

The third ground is purely religious: to defend Sayyeda Zeinab’s shrine. Zeinab was the daughter of Imam Ali, who is revered by Shiites, and Fatima, who was the daughter of Islam’s prophet, Muhammad. Zeinab also played a key role in the Battle of Karbala, which happened in 680 and is central to Shiite consciousness. It is that battle that split the Muslims into Sunnis and Shiites. Zeinab was with her brother Hussein when he was killed and beheaded by Yazid bin Mu’awiyah in the Battle of Karbala.

Zeinab is the “tongue” of Ashoura, the main annual Shiite religious event where Shiites commemorate Hussein’s death in the Battle of Karbala in an atmosphere of revolution and sadness. Zeinab saw the death of her family, Muhammad’s family. She was one of their heirs. She defied the tyrant Yazid by giving a speech that is famous in Shiite history. She was arrested with the remaining descendants of the prophet and taken to Damascus, where she died.

Nasrallah pointed out this religious dimension to assert the legitimacy of his war. When Zeinab was taken to Damascus, she was with her brother’s 7-year-old daughter, Sakina, who also died in the Umayyad’s capital, Damascus, and now has a shrine in Daraya, southeast of Damascus. But that shrine was destroyed during the current war. The Shiite world fears that the same may happen to Zeinab’s shrine; hence the slogan “Zeinab will not be imprisoned twice,” which points to the historic, religious and political dimensions of the conflict. It is a conflict that seems to be weeks or months old, but is rooted in an event 14 centuries ago.

There are two other reasons for the timing of Nasrallah’s speech, one linked to Russian Deputy Minister of Foreign Affairs Mikhail Bogdanov’s visit to Beirut and the other to expected developments in Syria. I will explain those two reasons in my next article.