Border villages of Hezbollah-backed Shiites sympathetic to Assad are clashing with the Sunni Jabhat al-Nusra, reports an Al-Monitor correspondent in Beirut. 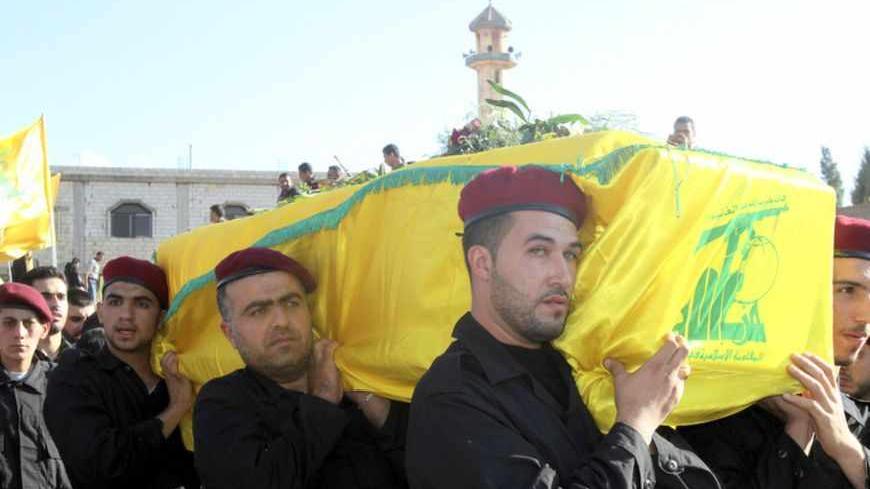 Three months ago, Hezbollah Secretary-General Sayyed Hassan Nasrallah warned that the West is indirectly attracting al-Qaeda members to Syria to be killed there, thus achieving two significant goals by weakening the Syrian regime and creating a genocide for al-Qaeda.

But there are those who believe that Nasrallah has fallen into the trap set up for al-Qaeda by the West and led by Washington.

Almost a month ago, Hezbollah slipped further into the gravitational pull of Syria's internal war. Almost daily, the body of at least one Hezbollah member fighting in Syria along with the Syrian regime was being returned to Lebanese Shiite villages in the South and in the Bekaa valley.

Information indicates that about 35 Hezbollah members have been thus far killed in Syria. They died in the Homs countryside, Zabadani — near the Lebanese border — and in the area of Sayyida Zeinab, which is located in the countryside south of Damascus.

According to the most recent information, a group of Hezbollah members fighting in area of the Sayyida Zeinab shrine were subjected to a major attack carried out by Jabhat al-Nusra a couple of days ago. This attack led to heavy losses, leading Hezbollah to organize a counterattack to recapture the ground it had lost in the area of the shrine.

Hezbollah does not announce the deaths of its members all at once. It gradually announces them and the bodies are transferred to Lebanon in stages in an attempt to avoid a backlash from its social base against its participation in the Syrian war.

But the most important development related to Hezbollah's involvement in the Syrian war is the start of direct battles between its armed groups deployed in the Lebanese city of Hermel and the village of al-Qasr, near the town of al-Qusayr, which is home to Lebanese Shiites as well as Sunnis and Christians, but located inside the Syrian border.

Jabhat al-Nusra has been shelling the village of al-Qasr on a daily basis for several days, with the latest round of shells hitting the village square. Two days ago, the shelling killed a boy who was returning from school.

The most dangerous part about the al-Qasr battles is that they are transferring every single detail of the ethnic fighting in Syria to Lebanon. Al-Qasr is home to Lebanese Shiites who come from the same families in the Lebanese city of Hermel and the Syrian town of al-Qusayr. These families belong to tribes which still believe in revenge and in the rescue of relatives.

When Shiite people from al-Qasr village and al-Qusayr before them died, the residents of Hermel announced a public period of mourning in the city and received condolences. These developments show that the fighting between the Lebanese Shiites of the Hermel region and their Sunni neighbors, residents of the Syrian towns and villages surrounding them, will not be ending anytime soon. The values ​​of revenge in which the Shiites of the Lebanese Bekaa and their relatives in the Shiite villages of Syria believe will prolong this strife for many years to come. For them, revenge is an inherited habit that is then passed on to future generations.

But what is more important in this development is that Hezbollah is taking advantage of the fact that its social base in the Bekaa region, which is adjacent to the Syrian border, is feeling victimized and that Jabhat al-Nusra is killing its sons in al-Qasr village and other villages for sectarian reasons.

Faced with these kinds of developments, Hezbollah can avoid being held accountable by its popular base regarding its involvement and the involvement of Lebanon's Shiites in a war in which they do not have a direct interest.

Apart from its biased media, Hezbollah is witnessing an intense debate regarding its slide into the Syrian war and the way it should deal with its social base to justify deaths. Thus far, its media has directed itself toward its base by focusing on the fact that Lebanese Hezbollah fighters in Syria are fighting a battle to defend the Sayyida Zeinab shrine, a Shiite holy place. This justification is trying to give religious legitimacy to their potential martyrdom.

Moreover, Hezbollah keeps saying to its popular base that its members are scoring unprecedented victories. Hezbollah is thus exhorting the general public to feel proud about their children fighting in Syria, instead of feeling sad and frustrated that these members are fighting on the wrong front, i.e., [not fighting against] Israel, as promised by Hezbollah.

Despite the party's attempts to avoid the emergence of a crisis between it and its popular base, which provides it with about 100,000 armed men, against the backdrop of its involvement in fighting in Syria, its Shiite community is still widely expected to object to the growing numbers of dead in Syria.