For Hezbollah, What is VictoryIn Syria?

Hezbollah grapples with the long-term objectives and consequences of its intervention in Syria. 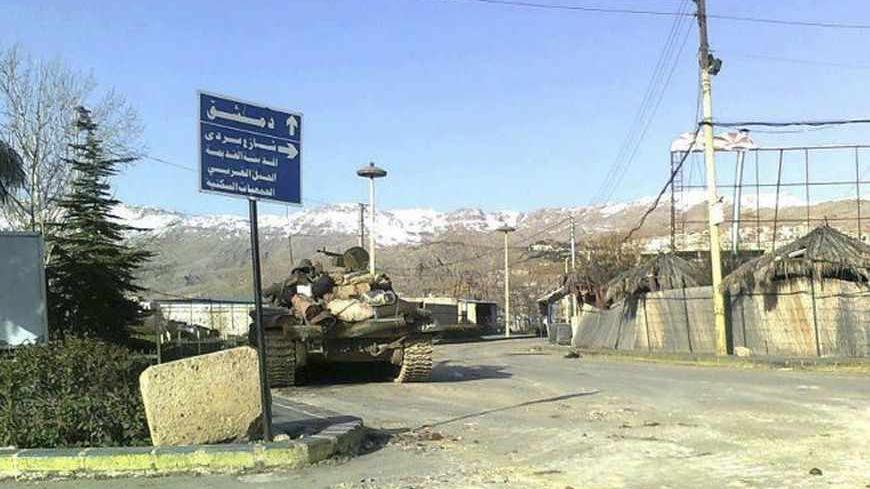 A Syrian tank is seen in a neighborhood of Zabadani, Feb. 14, 2012. Hezbollah is expected to take the fight to a border area around Qalamoun, Lebanon, including Syria's Zabadani region, to isolate Salafist fighters in Arsal, Lebanon, from their Syrian counterparts. - REUTERS

A debate is under way within Hezbollah’s milieu about the objectives behind the party’s participation in the Syrian civil war. Yet, the question now has gone beyond the issue of why it chose to enter this war, as the party’s popular base and its most influential internal elites are seemingly convinced by the explanation offered by Hezbollah Secretary-General Hassan Nasrallah. The latter said that instead of waiting for the extremist Islamists to come fight us on our doorsteps here in Lebanon, we decided to choose the time and place of this confrontation, which they initiated.

As a result, a different, much more complicated issue is currently being discussed inside the party, and the discussion is growing in intensity behind the closed ironclad walls that surround the party’s decision-making fortress. The issue at hand relates to the objectives of this battle, and the goals that, once attained, would allow Hezbollah to proclaim that it has in fact achieved the military objectives that drove it to participate in this war.

In other words, when will Hezbollah’s fighters return home from Syria? And when will Nasrallah announce to his popular base that the military mission in Syria has been successfully completed, its goals reached, and the victory that he promised his audience to “again deliver,” won?

For now, this question remains without official and satisfactory answers. But leaked perceptions from inside the party point to the possible nature of the answers to come. Yet, everything remains within the realm of conjecture until Nasrallah speaks his piece about the matter; for a remarkable phenomenon permeates the party, and revolves around the fact that its supporters, when faced with difficult situations, patiently wait for Nasrallah to appear on their television screens to present them with clarifications about the issue at hand. Until then, all potential answers remain fodder for their continued puzzlement and concern.

The issue of the physical and temporal horizon for Hezbollah’s involvement in Syria remains the source of anxiety for the party’s popular base because of Nasrallah’s continued silence about the matter. The reason for this anxiety emanates from subtle factors that may be invisible to those not privy to the psychology that drives Hezbollah’s social base. For the people’s fear has nothing to do with the human cost that might be paid. Although present among the party’s supporters, this factor can be easily remedied with ideological and religious mobilization efforts. Martyrdom in defense of the Sayyida Zaynab shrine has great appeal within Lebanon’s Shiite community. It is considered a goal worthy of sending their children to die for, in search of gloried martyrdom for the sake of Sayyida Zaynab, the Prophet Muhammad’s daughter and the woman considered to be the jewel of his household, whose members the Shiites revere and consider rightful heirs to the caliphate.

The fact is that the source of concern lies within the Shiite social framework from whence Hezbollah’s social base emanates. For this framework easily glorifies the party’s past victories against Israel, but is wary of the party possibly embarking on adventures with unforeseen consequences, and therefore prefers that such adventures be ended as quickly as possible.

On the other hand, the main issue within the party’s direct social construct revolves around the nature of the victory that Hezbollah must achieve in this battle. Is its goal keeping President Bashar al-Assad in power, even if achieving that requires staying on the Syrian battlefield for years? Or does the goal revolve around protecting the resistance’s back, which also is not a short-term endeavor, and requires that the party fights wars on two different fronts: that of defense against Israel, as well as the one needed to keep supply routes open from Syria to the resistance (Hezbollah).

As part of this debate, mitigating answers are given, which indicate that the party’s involvement in the fighting in Syria was not the result of it getting unintentionally embroiled in something that needs to quickly end. In fact, its involvement is a reflection of the party being part of a strong alliance that is fighting in Syria — an alliance that extends from Russia, to Iran, through Prime Minister Nouri al-Maliki’s Iraq, and all the way to Lebanon. And, as part of this alliance, the party has gained regional stature that increases its defensive capabilities, and not the other way around.

Also, within the party’s elite circles, inferences have been made, albeit not confirmed by substantiated information, that Russian Deputy Foreign Minister Mikhail Bogdanov’s visit to Lebanon after spending time in Tehran last month, and his meeting with Nasrallah, was for the purpose of coordinating the party’s effective entry into the war in Syria. Regardless of the accuracy of said information, its dissemination is meant to indicate that the decision to partake in the war was built upon strong calculations.

In the speech during which he announced the party’s involvement in the Syrian war, Nasrallah alluded to the direct objectives his party sought to achieve, and defined them as meant to put an end to the Syrian opposition’s military presence in three different areas: The Damascus’ countryside, which is home to the Sayyida Zaynab shrine; the Homs’ countryside, which includes the city of Qusair and surrounding villages; and the Qalamoun area, which includes the Zabadani region. While the battle for Damascus’ countryside takes on a religious dimension because it relates to the defense of the Sayyida Zaynab shrine, the battle for Qusair takes on a geopolitical dimension because controlling it safeguards the supply routes between the Shiite areas in this region of Syria and their counterparts in the adjacent Hermel region of Lebanon. It should be noted that the Shiite inhabitants of villages in the Qusair countryside have strong clan ties with their brethren in the Lebanese city of Hermel. The battle for Qalamoun, on the other hand, is expected to start soon, for its importance, in Hezbollah’s calculations, is that it would serve to isolate Syrian opposition forces in the Zabadani region from the Lebanese Salafists located in the town of Arsal and its surrounding vast wastelands.

From a preliminary standpoint, control of the three previously mentioned regions comprise Hezbollah’s operational objectives in Syria. It is therefore expected that Nasrallah would announce the end of the party’s involvement in combat there once their controlled is achieved.

Yet two factors are creating doubt about this prevalent expectation that Hezbollah’s supporters have pertaining to the party’s direct military objectives in the Syrian confrontation. First, the battle is not linked to specific military objectives, but is a battle for survival, and therefore, the fighting in Syria is a long-term affair that goes beyond a quick military raid or skirmish. Second, Hezbollah did not enter Syria with plans to exit it: The roles that it and the Syrian regime played in their common confrontation against mutual foes have become so intertwined that they are no longer distinct. The reality on the ground now necessitates that they both be part of a unified military effort that stretches from Iran to Lebanon, via Iraq and Syria.