The battle at Qalamoun

Hezbollah and the Syrian regime army have been fighting militants for control of the Qalamoun area near the border. 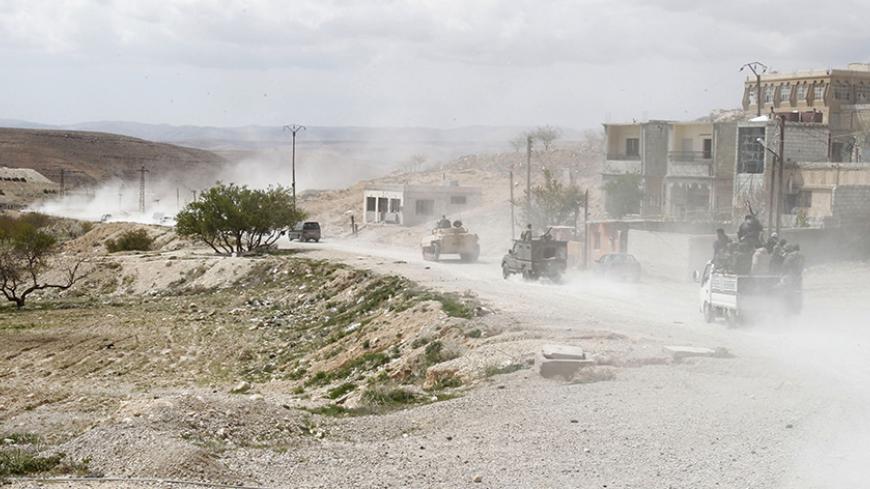 Forces loyal to Syrian President Bashar al-Assad are seen at al-Sakhra village in the Qalamoun Mountains, northeast of Damascus, after taking control of the village from rebel fighters, April 14, 2014. - REUTERS/Khaled al-Hariri

BEIRUT — Clashes have been raging along the Lebanese-Syrian border since May 6 between Hezbollah militants and the Syrian army, on the one hand, and the militants of the Islamic State (IS) and Jabhat al-Nusra, on the other. These clashes are highly significant and might have various outcomes and dimensions for what has become known as the Qalamoun battle. To understand the situation, some factors should be put into perspective.

Qalamoun is a mountainous region along Syria's western border with Lebanon. Its rough barren lands stretch along 600 square kilometers (231 square miles) and includes a mountain range that rises over 2,000 meters above sea level. The region stretches from Syria's Zabadani region in the southwest to an-Nabek in the northeast. Given the area's wide range, it includes a pathway to Damascus in the southeast and to Homs in the north.

Hundreds of militants affiliated with the terrorist groups fighting in Syria have sought refuge in this region after losing their positions in several neighboring areas. They lost the Qusair battle in June 2013 and an-Nabek battle in March 2014. Reportedly, thousands of IS and Jabhat al-Nusra terrorists, among other groups, made this rough mountainous area their stronghold.

Arsal and the West Bekaa have a predominantly Sunni population. Arsal is also home to about 90,000 Syrian refugees, most of whom are Sunnis and many of whom are armed. Therefore, since the outbreak of the Syrian war, this region has been a hot spot in the Lebanese underbelly. Meanwhile, Baalbek has a mostly Shiite population that supports Hezbollah.

This geographical setting helps one understand the dimensions of the battle between militants opposing the regime in Syria and others backing it. It is also a Sunni-Shiite battle. Most importantly, it is a battle over a geographical region that is delicate for both parties.

The first interpretation, belonging to pro-Syrian regime and pro-Hezbollah forces, suggests that the terrorists positioned in locations adjacent to the Lebanese border will not accept to remain under siege in those barren lands. They will try to break the blockade by infiltrating Lebanese territories, especially the regions inhabited by those Syrian refugees and Lebanese supporting them. Many parties, Hezbollah among them, openly stated that after the improvement of the climate in the region, the groups would wage a battle to break free. Hezbollah Secretary-General Hassan Nasrallah said Feb. 16, that after the snow melts, Lebanon will face a decisive battle in Qalamoun.

The interpretation of the other party, namely those opposing the rule in Damascus, suggests that the Qalamoun battle is decisive because the Syrian borders with Lebanon are the last borders that remain partly in the grip of the Syrian regime. Its other international borders — starting from Israel in the south and reaching Jordan, Iraq and Turkey in the north — are under the control of opposition militants and have thus become unsafe. Therefore, according to this interpretation, the regime in Syria and its allies in Lebanon (namely Hezbollah) have to fight this battle to control the border to keep the last piece of land open to Damascus from the Lebanese west. The Syrian regime and Hezbollah are waiting for the weather conditions to improve to fight this decisive battle, starting from the barren lands in Qalamoun.

No matter which interpretation is correct, the battle that effectively started the morning of May 6 was inevitable.

At the break of dawn, violent clashes in several areas along the Syrian-Lebanese border broke out facing the Syrian town of Assal al-Ward. The clashes lasted two full days, and a quick look at a map of the region shows that it was not a coincidence that the battles happened in Assal al-Ward. The Lebanese town has extended into Syrian lands since the 1920 demarcation of borders between the two countries. Consequently, it is the farthest east of any Lebanese region.

Lebanese military sources told Al-Monitor that Hezbollah militants launched on May 7 a series of limited and quick operations that coincided with Syrian army operations from the eastern side. The operations are ongoing. As a result, they managed to tighten their grip on Assal al-Ward and its barren lands and expel the militants. They also connected the region to the Shiite pro-Hezbollah town of Brital near Baalbek.

Hezbollah and the Syrian army achieved several significant military goals. They separated Zabadani militants in the south from the Qalamoun militants, and prevented them from having any logistic contact, thus thwarting the possibility of militants assisting IS operations. They also isolated Qalamoun and Zabadani and put each under separate blockades, thus paving the way for smoother and easier battles in each.

Military sources told Al-Monitor on condition of anonymity that the actual moves on the ground indicate that the big battle is imminent and might happen soon, in the second half of May.

The Qalamoun battle has a clear aim: expanding the Syrian army’s and Hezbollah’s control over the Syria-Lebanon border regions while expelling militants and annexing the areas where the Syrian army is present (in the east) to those where Hezbollah is present (west).

by Haitham EL-TABEI with AFP correspondents in the Middle East | AFP | May 17, 2022
END_OF_DOCUMENT_TOKEN_TO_BE_REPLACED