Hezbollah leader Hassan Nasrallah has said that "Syria has real friends in the region, and the world will not let Syria fall into the hands of America, Israel or [radical Islamist] groups," reports Ali Hashem from Beirut. 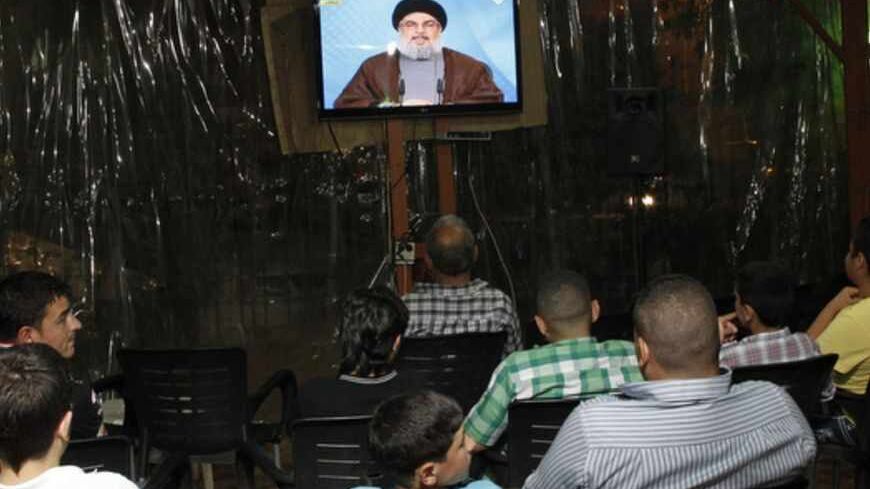 "Hezbollah is giving a hand in Syria," said the group's chief, Hassan Nasrallah, in his televised appearance on Tuesday. The speech came only days after Nasrallah met Russian Deputy Foreign Minister Mikhail Bogdanov, and less than a month since he met Iran's Supreme Leader Ayatollah Ali Khamenei in Tehran.

Nasrallah's speech was almost an identical copy of what Al-Monitor quoted from sources close to Hezbollah last week on the group's role in neighboring Syria. It was a cocktail of warnings, revelations and political stances, with two main ingredients: Syria and Israel.

"Syria has real friends in the region, and the world will not let Syria fall into the hands of America, Israel or takfiri [radical islamist] groups," he said. This might be Nasrallah's most important line in the speech, appearing to be a clear statement that a new chapter in the Syrian crisis has started.

In this regard, he addressed the Syrian opposition, calling on them not to think of taking Damascus or toppling the regime.

"The battle is long, although we have never called for combat," he said, and warned, "you cannot topple the regime militarily, and the facts on the ground prove that, although you have only fighting the Syrian army and the pro-regime popular forces until now." Nasrallah added, "No Iranian forces have entered Syria at the moment. If this is the situation so far, how things would be in the future should resistance forces and other nations intervene?"

It was as if Nasrallah was warning the opposition and its regional and international backers that the war is no longer between Syrian President Bashar al-Assad and the rebels, but a regional war fought in Syria.

As for Syria, Nasrallah clearly stated that his group is playing a role there in al-Qusayr, on the borders with Lebanon and in the Sayyida Zeinab area near Damascus.

"We will not leave the Lebanese residents of al-Qusayr to stand alone," he said, "and we will do anything to help them, especially since the Lebanese state has failed to protect these towns located on the border with Syria."

According to Nasrallah, there are more than 30,000 Lebanese residing in al-Qusayr. He explained, "Over the course of the last few months, the Syrian army has had to retreat from the towns around al-Qusayr, and residents of these towns had to face the rebels on their own."

As for the Sayyida Zeinab neighborhood, the site of the Prophet Muhammad's granddaughter Zeinab's tomb, Nasrallah said, "There are people who defend this area. These people are working to prevent strife and are not the ones who are creating it." He added, "This is a very sensitive issue, given the fact that certain extremist groups have announced that if they reach this shrine, they will destroy it," warning that "if such a crime were to take place, it will carry with it grave consequences. Countries supporting these groups will be held responsible for this crime if it takes place."

Nasrallah's last sentence was read by some in Beirut as a new equation in the struggle over Syria. According to their interpretation, Nasrallah meant that countries backing the opposition will pay the price if the shrine is destroyed, another point that might indicate a regional spillover is becoming imminent.

Another clear example of a possible regional spillover was the downed drone across Haifa's shores a week ago. Nasrallah denied any connection to the incident.

"Hezbollah has not sent a drone across Lebanon's southern border, and has denied these claims by issuing a one-line statement the same night of the alleged incident," said Nasrallah adding, "Everyone knows that Hezbollah has the courage to take responsibility for any act it performs, especially if it's against the enemy, and a lot of reservations and accusations are not a source of concern to the party."

Hezbollah's chief also denied any involvement by the Iranian Revolutionary Guard in the incident and explained that despite all the technology Israel possesses, "they have not yet been able to specify publicly where the drone originated from, and rather have different analysis and theories." He added, "The drone's wreckage has not been found yet and no footage or evidence has been provided by any media outlet." He suggested there were several possibilities for such an act: "one of our friends in Lebanon or Palestine" or "an unfriendly party — other than Israel — in order to push Lebanon into a confrontation with Israel amid the tense situation in the region, but there is nothing that can confirm this."  The third possibility is that "Israel sent the drone into Lebanese airspace, and then directed it back for certain political goals."

On this, he concluded, "If there is anyone who thinks that the resistance in Lebanon, as a result of regional events, is in a weak, fragile or confused position, they are deeply mistaken. We will confront any aggression against Lebanon, and we will emerge victorious."