In light of escalating political crises and sectarian divisions in Iraq, some fear the return of Baghdad’s infamous "death squads," who reigned with terror over the past 10 years. 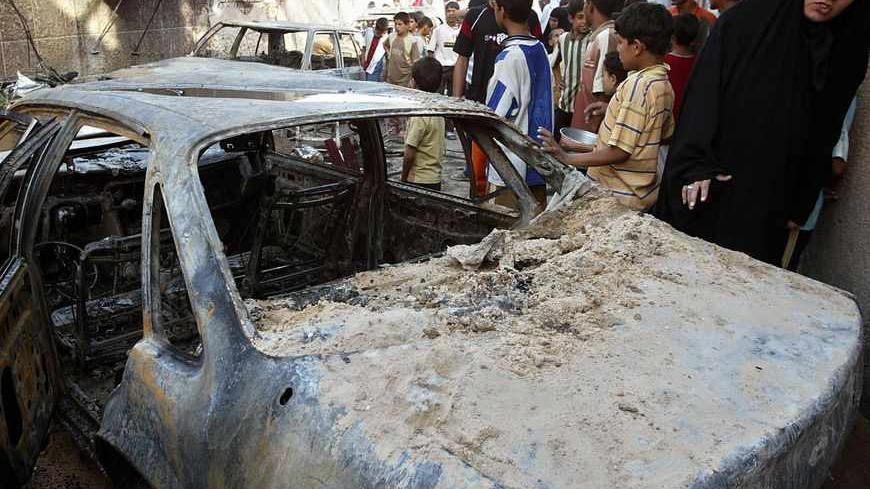 Iraqis inspect the damage following fighting in Baghdad's Sadr City, Aug. 7, 2006, when US and Iraqi forces raided a suspected death squad in the area. - REUTERS/Kareem Raheem

The term "death squads" evokes an unequaled panic among Iraqis. Memories of the killings based on ID cards during the Iraqi civil war cannot be forgotten. The civil war erupted after the bombing of the holy Shiite shrine in Samarra in 2006, and transformed ethnically-mixed cities in Iraq — particularly Baghdad — into the biggest scene of conflict. During the war, atrocities were committed by both Sunni and Shiite armed groups, including exchange killings and forcibly displacing people to different neighborhoods.

In turn, the death squads were the most ambiguous aspect of the war. They carried out kidnappings and killings by wearing Iraqi police uniforms, and traveling in official and military vehicles in 2006-2007 — while an evening curfew was in place (from midnight to 6 a.m.) — to hunt for their victims.

This term goes back to before the civil war, when The Washington Post used it on Dec. 4, 2005, while criticizing the way the Iraqi police forces were formed and infiltrated by militias.

Remarkably, the term has re-emerged after eight years. As news reports in Baghdad talked about the return of militants and killings carried out by armed militias in broad daylight, the Sunni Mutahidoun bloc held the Iraqi authorities responsible for this matter and accused them of bringing back the civil war.

The Iraqi Interior Ministry denied this matter and stressed that talk of false checkpoints where people are being killed according to their IDs in the streets of Baghdad is a rumor designed to spread panic.

Regardless of the number of assassinations carried out by the new death squads in Baghdad these days, they can really spread panic among city residents.

Horrific stories of assassinations carried out before the government forces’ eyes in the neighborhoods of Sedea, ad-Dawrah, Kadhimiya and al-Shaab, targeting both Sunni and Shiite citizens, have circulated among the population.

In light of the lack of accurate information from the authorities, the panic mainly reflects the fragility of the security situation in this country, and its vulnerability to internal confrontation.

The reason behind this impression is that talk about the return of the death squads in Iraqi police uniforms followed a series of developments. They began with intensified attacks by al-Qaeda and armed Sunni groups against Shiite residential compounds, which coincided with the outbreak of demonstrations in the Sunni cities in late 2012, and the rise of concerns about a potential new confrontation between the Sunnis and Shiites. This is particularly the case since Iraqi Prime Minister Nouri al-Maliki publicly warned that a civil war may erupt against the backdrop of demonstrations.

It could be said that the major achievement made by Maliki throughout his rule, which began in 2006, is eliminating the death squads through the so-called Saulat al-Fursan [Charge of the Nights] military operations. These operations were followed by a large-scale cleansing of the security forces, which included hundreds of officers and soldiers who were believed to be involved in one way or another in the establishment of the death squads.

This achievement is not only about Maliki himself, as head of the government or leader of the State of Law Coalition, but mainly about the people’s trust in the security services, and whether or not this trust will be undermined by high rates of violence and the return of various aspects of the civil war.

The main problem regarding the formation of the security and military forces in Iraq from 2003 until today is linked to accusations that they favor one social group at the expense of another, or maintain allegiance to Maliki's party alone.

Such accusations would be baseless had the Iraqi security forces committed themselves to the same role they played during and after the Battle of Basra, by declaring themselves the protectors and defenders of the people against terrorist acts.

It seems remarkable that the warnings of a civil war have not been associated with the bombings, for which al-Qaeda in Iraq has often claimed responsibility. These bombings did not shake the Iraqis’ confidence in the impartiality of the security forces — even though the number of victims in these bombings, which have continued throughout the past 10 years, exceeded the number of victims in the killings that have taken place in Baghdad these days. The decisive factor in this matter is the neutrality of the military and security forces, and their commitment not to become involved in political or sectarian conflict.

This scenario seems to be more difficult with the absence of US forces, which assumed the role of broker between political parties during the war, and had succeeded in restoring relative civil peace since 2008.

The American absence from the whole Iraqi crisis — whose security implications correlate with its political and social implications — was expressed by Iraq’s Foreign Minister Hoshyar Zebari. He told CNN in an interview on May 24: “We have lost the service of an honest broker. Before, it used to be the United States."

He also noted that the Iraqi government “has failed to rise above sectarian differences.”

Although Zebari ruled out the possibility that Iraq could slip into civil war again, the signs regarding the recent assassinations in Baghdad may indicate the opposite.

Today, the urgent question in the streets of Baghdad is, “Have all opportunities to prevent a civil war been squandered?”

The answer is probably difficult; however, it stresses the need for having political leaders that are up to confronting the crisis, not being a part of it.