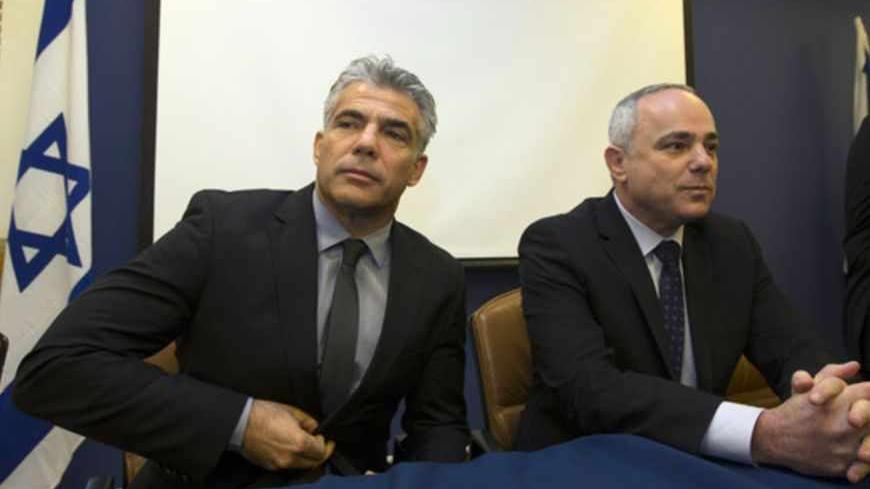 “During that dinner, I was photographed again with President Barack Obama, who is 1.90 meters [6 foot, 3 inches] tall. Afterward, with Secretary of State John Kerry, who is about two meters [6 foot, 7 inches] tall. Afterward, I stood on the side with Trade and Industry Minister Naftali Bennett who, like me, doesn’t reach 1.75 meters [5 foot, 9 inches], even when standing on a footstool and wearing heels. At a certain stage, the new beauty queen, Miss Israel Titi Aynaw, approached us with a large, enchanting smile on her face; incidentally, the 1.82-meter [almost 6 foot] beauty was wearing especially high heels. 'Brother,' I whispered to Bennett, “Don’t give in. Even if she asks us, we’re not going to be photographed with her.'”

This is a section from a Facebook post of Finance Minister Yair Lapid on March 23, including an excellent feuilleton describing his first days as minister. In that same post, Lapid describes the war of the ministers to sit next to the prime minister, in their desperate attempts to be photographed:

“My place is exactly opposite the prime minister, between Defense Minister Bogie Ya’alon and Minister of Justice Tzipi Livni. Later on, I learned that an entire struggle is waged over seats, mainly over sitting as close as possible to the prime minister. Why? Because the person sitting next to him, is also filmed for TV at the beginning of the meeting. I don’t really care, I have been on television enough in my life and it suits me to sit opposite him.”

In this amusing description, Lapid succeeds in telling a joke at the expense of ministers, while also flattering himself in his incidental, nonchalant manner.

Ever since his ministerial appointment, the state of Israel’s finance minister invests his precious time in writing long posts that are disseminated to his 174,950 Facebook friends (as of writing these lines) — posts that almost immediately become media headlines. All this, without being interviewed, without convening press conferences and without having to answer even one difficult question.

Lapid, in effect, continues to publish his popular personal column from the Israeli daily Yedioth Ahronoth — as finance minister. And he does this while glorifying and heaping compliments on himself. All the rest — from the United States president, to the US secretary of state and culminating with Israel’s defense minister, Ya’alon — are all supporting actors in the film starring Yair Lapid.

It turns out that Lapid has found a simple and efficient way to continue to be a columnist. But upon reading his recent posts, I have begun to wonder if his entire successful voyage into politics, culminating in the position of finance minister of the State of Israel, is nothing but a journalistic mission; a kind of a perfect cover-story enabling him to sneak into the highest levels of decision-making circles to report to us — his dedicated readers — directly from the territory.

What interests me is the question, “Where will all this end?” Will we be privileged to read amusing descriptions of the chief of staff and Mossad head from the defense cabinet meetings? And does our treasury minister also count his Facebook likes in his spare time?

Until now, Lapid’s Facebook posts have been fondly received, and viewed as part of Lapid’s characterization as a new politician who conducts a dialog directly with the public. But his recent post about “Riki Cohen from Hadera,” which continues to stir up the media, starts to worry me. After all, we are talking about a new finance minister who was a journalist only a moment ago and now must deal with the private and national headache of presenting the state budget.

I admit: I was not comfortable reading how the finance minister describes his meeting with the treasury officials in the first person, while getting down to such nitty-gritty details as, “the long table, on which cups of coffee that had long since become cold were strewn. Another endless column of numbers is projected on the large screen.”

But more than that, it was embarrassing to read how the state of Israel’s finance minister boasts how he “opened the eyes” of the treasury officials, when he bluntly tells them that “our role is not to balance Excel spreadsheets but to help Mrs. Cohen.” In the story written by Lapid, a 37-year-old teacher from Hadera has been cast for the role: she, and her high-tech husband (“not a high-level position”) earn (a little more than) NIS 20,000 a month (about $5,520).

In the aforementioned description of the war of the ministers for the seat near the prime minister, Livni and Ya’alon are cast in the role of the victims. In the second description, the treasury officials are the ones who find themselves as decor for blogger Yair Lapid’s Facebook platform.

Yet it seems to me that this time, Lapid has tripped himself up — not only because of the childishness he demonstrates, but mainly because of his ignorance.

Lapid’s choice of comparing himself to the biblical Moses in his Passover greetings [on his Facebook page] was an expression of tastelessness, arrogance and megalomania. And now, his populist manner of attempting to take the side of the middle class by treating a family with three children and a NIS 20,000 income as representative of the middle class, is disconnected from reality and irritating. Most of the people who demonstrated in the tent protest (2011), who represented Lapid’s power base in the recent elections, can only dream about an income that high. It would have been better if that post had never been born, and by now it is already clear that it threatens to dog Lapid’s heels for a long time.

Meretz chairwoman and Knesset member Zehava Gal-On was correct when she suggested to Lapid to begin to internalize that he no longer writes columns for Yedioth Ahronoth, and that his job is not limited to effusive posts on Facebook. The thousands of citizens who responded with anger and cynicism to Lapid’s words on his Facebook page are also correct. “Have you ever thought about a family that does not have a PC to read your posts?” wrote Uzi Ben-Zur, Lapid’s Facebook “friend,” to Minister Lapid. This was but one of 6,000 responses to the “Riki Cohen” post.

Lapid has made his first mistake, after he has otherwise conducted himself well since the elections. Now he is exposed as someone who continues to conduct himself as if in an election campaign, striving for victory pictures and symbols and personal aggrandizement — even before scoring even one achievement as finance minister.

The large public that voted for Lapid wants to see him, first and foremost, as a serious, statesmanlike finance minister who rolls up his sleeves and dives into his difficult position. This public can live in peace even without his painstaking Facebook posts. The question is, whether Lapid is also capable of this.

Mazal Mualem started her journalistic career during her military service, where she was assigned to the Bamachane army weekly newspaper. After her studies, she worked for the second-largest Israeli daily, Maariv. In 1998, she joined Haaretz, covering local governance, and later, she was appointed chief political analyst of the paper. After 12 years with Haaretz, she returned to Maariv as their chief political analyst.