Yair Lapid: As Israeli as You Can Get

Ben Caspit writes that Yair Lapid, the biggest winner of the elections, owes his success to the fact that he represents for many the "ultimate Israeli." 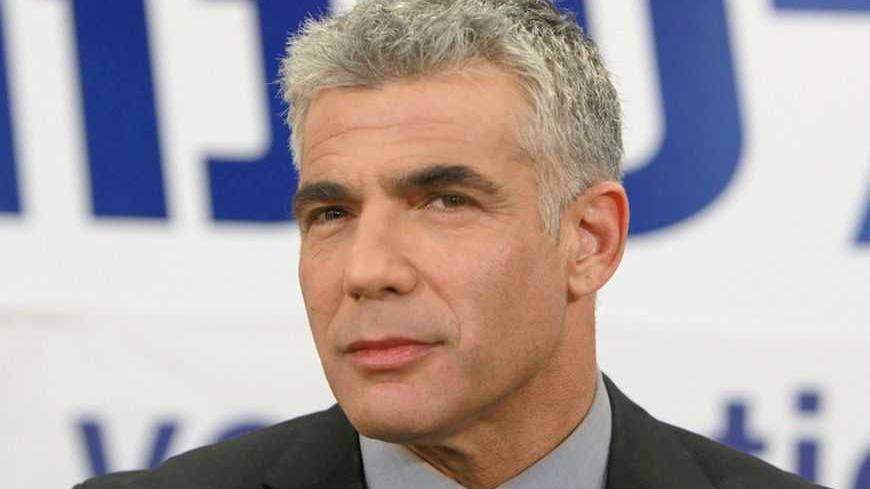 The main insight regarding the election results is clear: Israel has returned to sanity. The public is sick of extremists and extremism and signals its leaders: No more. We want normalcy. We want to live quietly. We are no longer willing to continue to be suckers of certain sectors (especially the ultra-Orthodox sector). We don’t want to quarrel with the entire world. We are willing to take chances for peace, if only we had a partner.

Three important things took place in Israel’s voting booths: A conspicuous no-confidence tipoff to Prime Minister Benjamin Netanyahu. A surprising vote of confidence in the inexperienced but charismatic journalist, Yair Lapid. And an unexpected tie-standoff between the right and center-left blocs. It could have been a lot more significant if Netanyahu had had a clear, genuine opponent, experienced at these kinds of elections. In such a situation, Bibi would have lost the government and gone home to Caesarea in ignominious defeat. But anti-democratic steps were taken and draconian laws passed in the Knesset [Israeli Parliament] just in time to allow Netanyahu to isolate the system from the penetration of dangerous rivals. Graduates of Israel’s defense system are now forced to wait four years before they can jump into the political pool. This has served to dry up the main repository that would enable Israel’s political system to renew and rejuvenate itself. Thus the path was paved to perpetuate the “King Bibi” regime.

But then the Israeli public stood up and determined differently. On election day, Likud’s in-depth polls predicted a collapse, down to 27-28 mandates. This would have been an inconceivable defeat. A last-minute resurgence and a vociferous, flamboyant, “Omigod” campaign minimized the damage and allowed Netanyahu to recruit a last-minute bare majority to the right-wing bloc (59 to 61 mandates out of 120). Almost the only leader who is capable of losing a campaign under such optimal conditions — without having a real rival on the playing field — is Benjamin Netanyahu. His autocratic kingship has ended, a short time after it began. Netanyahu learned the limits of power the hard way. Despite the fact that he is close to breaking Israel’s record for his years of donning the prime minister’s mantle, Bibi has been one of the least-popular prime ministers in Israeli political history. He consistently reduces Likud’s strength in elections, and is responsible for some of the most embarrassing outcomes of the ruling party.

Who is Yair Lapid? An Israeli, as the Israelis would like to believe that an Israeli should look and behave like. The average Israeli wants to be Yair Lapid, or at least marry off his daughter to him. To borrow from the “All-American” concept, Lapid is the “All-Israeli.” He has almost no formal education, but he proves that one can manage without it. He is the son of a famous journalist and successful politician, and a popular, first-rate novelist; he is a bereaved brother and the father of an autistic girl, and he invests much energy in struggles on the autism issue. Lapid became the most popular male in Israel, mainly due to the television program he presented and the popular column he wrote for the Maariv newspaper, and afterwards for Yedioth Ahronoth. His tremendous inquisitiveness, his fast reading skills and his natural intelligence have transformed him into someone who knows enough about almost everything. He may be rather shallow, and that is sometimes embarrassing, but he has enough personal charm to cover up for these slips.

Lapid is an ardent fan of all forms of American culture. From Bruce Springsteen to Abraham Lincoln, Woody Allen, Schwarzenegger and Annie Leibovitz — Lapid doesn’t miss a beat. If not for the fact that he was born in Tel Aviv, Lapid would have evolved on the line between Greenwich Village in Manhattan and Beverly Hills, with stopovers in Boston, Chicago, and every chance diner on Main Street, USA. He likes to take driving-trips by himself throughout America on outlying, remote roads, where he makes unplanned stopovers and burns Springsteen and Waits discs on his long night drives. He can recite Keats’ poems by heart, then effortlessly segue to a detailed description of some of Muhammad Ali’s obscure boxing fights at the beginning of his career, or Mike Tyson’s — at the end of his. Lapid is an amateur boxer; he still works out almost every day and is fond of his muscular physique. He is a good person, in the positive meaning of the word. He hates mud fights and dirty games.

He loves the country. He is, to a certain extent, also in love with himself. Determined. Industrious. Strong-minded. Lapid lacks any kind of managerial experience, a fact that intensifies his tremendous achievement of creating a magnificent apparatus and well-oiled party overnight, in real-time and while conducting the election battle campaign. Lapid is capable of being full of himself as well as modest, at one and the same time. It is a fact that he did not agree to declare his candidacy for the prime minister’s post, because it is too early and “immodest,” and did not agree to try and establish an alternate government when it seemed that there was a draw between the blocs. I am not there yet, he said, I am not yet mature, he declared. But from this declaration, we may perhaps conclude that next time, he will not be so humble. From this moment and on, Lapid’s eyes are already on the next elections. If there will be no mishaps, then Lapid hopes to be the ultimate Israeli candidate for prime minister. Without a military background, without diplomatic experience, without a managerial history. He will, somehow, have to acquire all these skills over the next few years. And believe me, he will acquire them.

Yair Lapid wants to leave the ultra-Orthodox in the opposition and form a coalition with Habayit Hayehudi leader Naftali Bennett, Kadima party leader Shaul Mofaz and Hatenua leader Tzipi Livni. Benjamin Netanyahu wants exactly the opposite. He wants to leave Bennett in the cold and retain Shas. This war is currently being waged between them, and Lapid intends on winning. Lapid is a temperate, moderate person who will aspire to a political process with the Palestinians. He does not really believe that now, there is someone on the other side who can sign on the dotted line of a settlement, even a former Prime Minister Ehud Olmert-type settlement. Lapid is a realistic left-winger who sailed to the center and waits there for developments. As opposed to Netanyahu, who does not believe Arabs wherever they may be, Lapid is willing to give them a chance, but is suspicious of their intentions. He does not raise false hopes or delude himself like Tzipi Livni, who believes that a political process can lead to a settlement, but he is convinced that the political process will return to Israel the sweeping international legitimacy it enjoyed in the Olmert period.

Lapid is a former journalist and there are nine other journalists who will join him in the incoming Knesset; a respectable and impressive number, by all accounts. This number stands in inverse proportion to the status and situation of the Israeli media that absorbed harsh attacks in Netanyahu’s days, assaults on its very existence and independence. A significant portion of Israel’s media is in the throes of collapse, loss of independence or significant weakening. Only Yair Lapid can stop this process and reverse it. He has the power to force Netanyahu to re-collect the thugs he scattered in the Israeli democratic space, and fold up his programs for destroying, or re-educating, the media. He will have to extricate the public broadcasting network from under Netanyahu’s fingernails; to legislate a public broadcasting law that will sever the broadcast authority, once and for all, from any kind of political influence; and to facilitate the recovery of the commercial channels. Most important of all, Lapid will create a government program to assist the traditional media to survive. Lapid knows this field like the back of his hand. It is the one sphere in which no one can say that he has no experience. Without a free media, there is no democracy. Lapid knows this very well. The media gave his campaign a certain tail wind, and now expects him to come to their aid.