A Seven-Point Plan to Prevent The Collapse of Syria

Whether Syrian President Assad survives or falls should not be the endgame, writes Seyed Hossein Mousavian, who proposes a seven-point plan to prevent the further destruction of Syria. 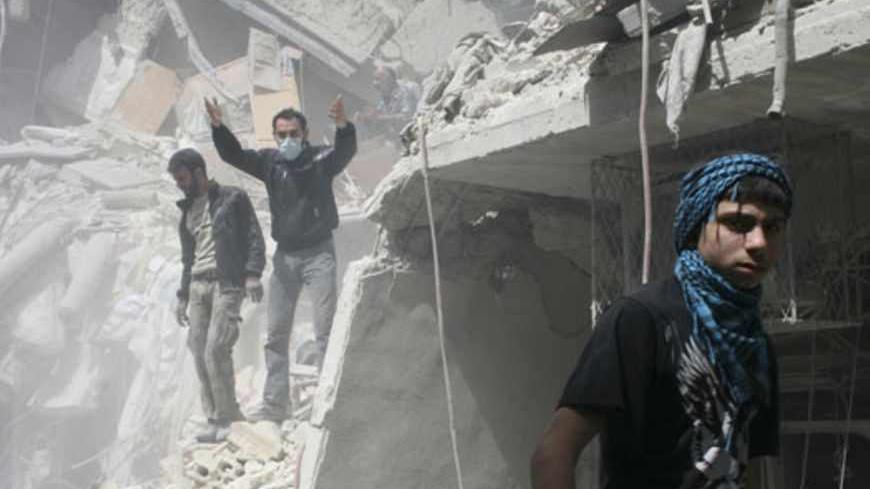 People search for survivors in the rubble in a damaged area, what activists said was a result of an air strike by the Syrian regime, in Al-Sukkari neighborhood in Aleppo, April 7, 2013.

Since March 2011, 70,000 Syrian civilians, military, government officials and opposition forces have been killed, 3 million have been displaced and 1.1 million Syrians have become refugees — plunging the country into turmoil and placing the security of the whole region at risk. The Syrian instability is dragging the country toward the throes of all out civil war, sectarian war and ultimately disintegration. If no immediate and robust actions are taken, this process could set into motion a chain of events that would pose a grave threat to the stability of the entire Middle East and beyond.

While the West advocates for “secular” systems, they are paradoxically opposing the current secular government of Bashar al-Assad and backing the opposition led by radical Islamists and terrorist groups. On the other hand, Iran, which is often portrayed as pro-Islamist, has been accused by the West of promoting fundamentalism and extremism, even as Tehran continues its support for the secular government of Assad in Syria.

Arab governments and Turkey, with the help of the CIA, have sharply increased their military aid to Syria’s rebel forces, with signs of having an impact on the ground. Increasing covert efforts, permitted by President Obama, have paved the way for CIA and other US agencies to provide considerable financial, material and intelligence support to the rebels in an effort to oust Assad.

Iraqi Prime Minister Nouri al-Maliki, an ally of Iran and the US, unveiled the disturbing revelation that al-Qaeda terrorists are flocking toward Syria in an effort to lead the efforts in toppling Assad. These are the same extremists who have turned Iraq, Afghanistan and Pakistan into a “zone of terror” and aim to do the same in Syria.

This is hardly a new phenomenon. In the early 1980s, the US and its Arab allies supported the Taliban and al-Qaeda as they took up arms against the Soviet invasion of Afghanistan. Although this strategy may have yielded short-term successes, the US had an opportunity to recognize their mistake after al-Qaeda perpetrated the attacks of September 11, killing thousands of innocent civilians. I am confident that the US and its allies are repeating the same mistake, even as they are blinded by their laudable efforts to bring about regime change in Syria, without realizing that they may be opening a new front in the region, not only against themselves but against Israel as well.

Western projections that Syrians will embrace democracy in the aftermath of Assad’s fall are not knowable prior to regime change. Realistically, in an unmanaged post-Assad government, Syria would likely descend into sectarian war, a conflict that would primarily pit Shiites against Sunnis, but would ultimately spill into neighboring countries — Lebanon, Jordan, Iraq, Saudi Arabia, Bahrain and even Turkey — with unpredictable consequences.

In the midst of that chaos, it would also become likely that the trend of the al-Qaeda school of thought would swoop in and seize a “golden opportunity” to cleanse the country of non-Sunnis — Twelver Shiites, Alawites, Christians, Jews, Druze and any other heterodox or non-Muslim communities. Even if the bulk of Salafi ire has been directed at Shiites, this expansion of the zone of terror against nonconformists to the Salafi order would ultimately threaten Israel. The Israelis would then find themselves in a very lonely place with evermore growing tensions and dangers.

All attempts at bringing about a peaceful resolution to the current turmoil in Syria have failed. The  major regional and international players involved in the conflict — Iran, the US, Russia, Turkey and Saudi Arabia — have common interest on many critical issues, such as preventing the institutional collapse in Damascus, radical extremist-terrorist groups taking control of Syria, sectarian conflict, civil war, disintegration of Syria with mounting civilian casualties and the use of chemical weapons. These factors are the real redlines Tehran and Washington need to recognize and cooperate on.

Whether Assad’s rule continues or crumbles should not be the primary redline. The level and scale of the current destruction across the country begs the question of how Assad could continue ruling in any effective way after these two years. The lack of any meaningful assessment today of how a post-Assad Syria can be managed, would be a loss to all players, including Iran, the US, Hezbollah, Russia, Turkey, GCC countries and others. The instability, continued insecurity and fragility would undoubtedly continue for the foreseeable future — while the new forces in position of power would not necessarily be pro-any of the current regional and external players.

A newly conceptualized initiative must be convened immediately in order to determine concrete, pragmatic and attainable goals relevant to both a short-term and medium-term vision of transition. A forum with the participation of the P5 (the five permanent members of the UN Security Council) + the R4 (the regional powers Iran, Egypt, Turkey and Saudi Arabia) + the S2 (representatives of the current Syrian government, as well as representatives of the political, military and civilian opposition inside Syria and abroad) should secure the following seven-point plan:

Syria is on the verge of collapse.  If mechanisms for a post-uprising transition are not immediately put into place through international means and effort, then the potential for a region-wide sectarian civil war is inevitable, a situation that all players would lose.

Ambassador Seyed Hossein Mousavian is a research scholar at Princeton’s Woodrow Wilson School and a former spokesman for Iran’s nuclear negotiators. His latest book is The Iranian Nuclear Crisis: A Memoir published by Carnegie Endowment for International Peace.