The Endgame in Syria

In the context of concerns about Syria’s chemical weapons and renewed speculation about President Bashar al-Assad’s final days, four trends will determine if and when there will be an endgame in Syria, and what that might look like. 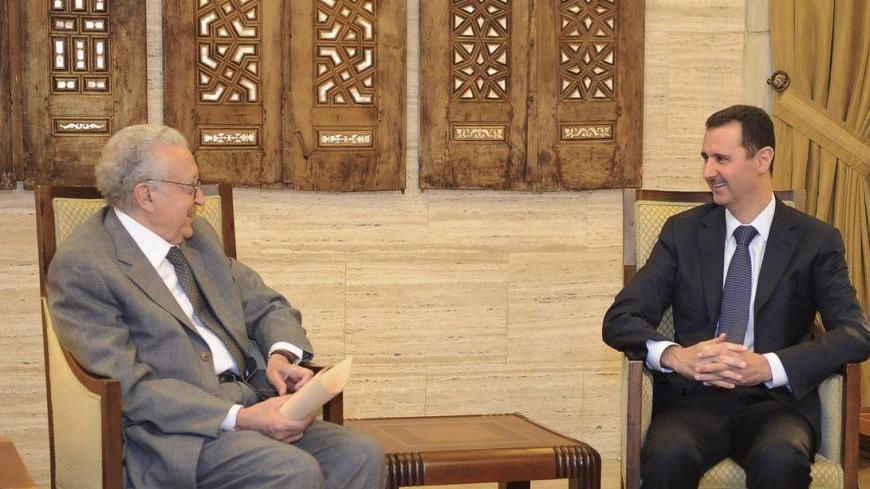 Reports of progress by the Free Syrian Army and that Syrian President Bashar al-Assad may be readying his chemical weapons gave grist to the media mill this week that Assad’s final days may once again be imminent. The meetings between Russian President Vladimir Putin and Turkish Prime Minister Recep Tayyip Erdogan, and among UN Special Envoy for Syria Lakhdar Brahimi, US Secretary of State Hillary Clinton and Russian Foreign Minister Sergey Lavrov renewed expectations that there may be a diplomatic plan afoot.

As the "post-Assad era" has been predicted for nearly 20 months, it is worth carefully examining four trends that might signal if and when there is an endgame in Syria — and what that endgame would be.

The first trend is the role of the Alawites. As reported in this column last week, “President Assad is the leader of the Alawites, until the armed Alawites decide otherwise. Simply put, until the Syrian Alawites themselves make a change, they will back Assad. Any initiative that therefore leaves out these same Alawites of Syria, and overlooks the sectarian, local and regional dimensions of the Syrian conflict, is a recipe for diplomatic failure and more deaths among all Syrians… Discussion of a "post-Assad" future for Syria solely among the Syrian National Coalition in Istanbul or Doha, absent a role for the Alawites inside Syria — who are presently represented and defended by Assad — will come to naught.”

CNN picked up this trend, first reported by Al-Monitor. “In the end,” Jamie Crawford blogs, “Assad is still seen as having the vast support of his Alawite sect, that of the Iranian government, and with it, a ruthless ability to stay and fight to the end. Whether his inner core of support will ultimately see that as the best option, remains to be seen.”

Also picking up this trend was US Ambassador to Syria Robert Ford, who spoke this week about the role of the Alawite community in Syria and fears expressed in some quarters that they could be victims of a ‘genocide’ in a post-Assad scenario. Ford said the Syrian opposition needs “to work with the Alawis and to help them understand that they do have a place in the future Syria, and a place where, as I said, they can live with safety and to enjoy the rights all other Syrians.”

These statements reflect a positive and overdue step in recognizing that the battle for Syria is not just the "Assad regime" against "the opposition," as it has been often and misleadingly portrayed. It is also a sectarian war playing out in Syria and throughout the region.

There are approximately 2.6 million Alawites in Syria out of a population of about 21 million. The Alawites, an offshoot of Shia Islam, are primarily located along Syria’s coast, in Tartous and Latakia, and in the plains surrounding Homs and Hama, as well as scattered throughout the country. They are a minority at war with Sunni Muslim majority, with Christians and other groups as victims caught in the crossfire.

The Alawites happen to be the community of the Assads and therefore have enjoyed the good graces of the regime in power. There should be no guilt by association, but there is. The Sunni and Alawite communities, backed by their regional patrons, are in a killing mood. Hundreds of thousands of Alawites are armed to bear, and will stay so, thanks to Russia and Iran, just as Qatar Turkey, and Saudi Arabia militarily support the Free Syrian Army and other armed opposition groups, including an increasing number of hard-core Salafi fighters linked to jihadists in Iraq and North Africa.

The need for reconciliation between the Sunni and Alawite communities is essential whatever Assad’s fate. Absent a lucky hit, that fate will be decided by the Alawites themselves, those Alawites in Syria that is, not those in the hotels of Doha or Marrakesh, at least for now.

The second trend is the role of Russia. The question is not, as is often reported, whether Russia is now ready to ditch Assad. It is fantasy to think Moscow would simply demarche Assad to take a hike and that he would do so. Such speculation defies analysis of what is the extent, and what are limits, of Russia’s influence in Syria. The best Russia might be able to do is help broker an agreement with Assad and those around him to allow early elections (presently scheduled for 2014).

Moscow seems focused on a fresh diplomatic approach to Syria. The Putin-Erdogan meeting last week appeared to move Turkish policy, if only slightly. As senior Turkish journalist Semih Idiz wrote in Al-Monitor, “Turkey appears to be reconciled to the idea — which it previously rejected — that key elements of the present regime in Damascus will probably have to be retained after Assad goes.” Those "key elements" include the Syrian Army, which might number at least 200,000 loyalists and regime supporters, still a formidable force, and a sign that a "post-Assad" era may not be in the cards even if he is forced from the presidential palace but remains in Syria.

The third and related trend is the potential for increased tensions and further skirmishes between Turkey and Syria, which also brings us back to Syria’s chemical weapons. Syrian Foreign Ministry spokesman Jihad Makdissi said on Saturday that chemical and biological weapons will not be used “inside Syria.” In July, Makdisi had said that “chemical weapon’s won’t be used unless in case of external aggression.” If Assad has given the order to prepare his chemical weapons arsenal, the target could well be Turkey. The Turkish border is the lifeline for those fighting Assad’s government. Turkey’s very public request for patriot surface-to-air missiles should be considered in this context. Putin’s ability to get Erdogan to recognize the need for a unified Syria and Syrian army may have been an urgent signal to those around Assad to help defuse this crisis.

The fourth trend is the role of Iran, whose influence in Syria surpasses that of Russia. There is no closer relationship, and no country with more vital interests in Syria. Syria is Iran’s strategic depth and its supply line to Hezbollah and other affiliated groups. Iran can be the key either to a diplomatic solution, which has been reported extensively in Al-Monitor, or to conflict on other fronts, including Gaza, Lebanon, and the Arab-Kurdish fault line in Iraq.

The emphasis on Syria’s chemical weapons may also be linked to the Iran file. Syria’s chemical weapons program has reportedly been assisted by Iran. In the regional context, the program could be considered an Iranian strategic asset, especially in the event of an Iranian-Israeli confrontation. Hezbollah leader Hassan Nasrallah, in a speech on Oct. 11, 2012, about the Iranian-built Hezbollah drone shot down over Israel, opaquely referenced other capabilities, saying “the Resistance is able to hide its capacities as well as revealing them or some of them at the appropriate time to send the appropriate message in the appropriate time.”

Iran also may worry about the principle of allowing the West to take out Syria’s chemical weapons at a time when its nuclear program is under threat. Iran might therefore declare its own “red line” as a statement against foreign intervention. Acquiescing in an attack on Syria could be seen as sending the wrong signal about its strategic assets in Iran and throughout the region.

As negotiations continue on the date for the next round of talks between the P5+1 and Iran about its nuclear program, the utility of such a negotiation and forum is open to question. The strategic issues are already very much in play in Syria and throughout the Middle East. This is, in the end, a local issue and the prospects for either resolution or escalation will be determined by what happens in the region.

The endgame in Syria will be elections, which can only take place after a cease-fire. The cease-fire, if it is to happen, will need to be negotiated with Assad or whoever he designates. And if there are elections, whether early or not, who would run on behalf of the Alawite community, if not Assad himself, or perhaps another Alawite, a "Syrian Medvedev?"

One cannot look at Syria without thinking about Egypt and Libya. There is what should by now be the obvious point about how the Arab Spring has become an Islamic winter in the context of fragile if not failing states. Syria is no different, and could be worse.

In what might be a best-case scenario, one could envision Syria’s Muslim Brotherhood, with increasing Salafist influence, running as a reconstituted party on the model of Morsi’s “Freedom and Justice Party” against the party of the Alawite regime or its inheritor, perhaps backed by Christians and secular Sunnis, who would claim to uphold Syria’s modern and secular trend. The election would pivot on the attraction of the party of the Brotherhood to those secular or moderate Sunni Syrians who might be wary of the Brothers and their allies, the imposition of Shariah Law and a power grab that would return Syria to dictatorship, this time in Islamic guise. The role of the secular Sunni community in Syria also depends on how events in Egypt unfold, and what model Morsi and the Muslim Brotherhood can provide to comfort secular Sunnis. In contemplating this and any other scenario about Syria, the “final days” may be more illusion than reality.