In an interview with Mazal Mualem, Knesset Member Nitzan Horowitz details his vision for regional cooperation with Israel's neighbors. 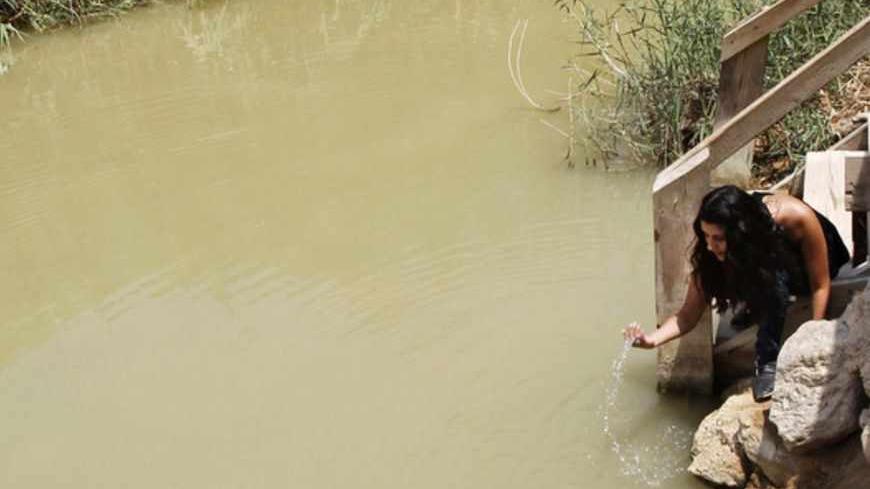 A Jordanian visitor scoops up water along her country's side of the Jordan River, Aug. 3, 2010. - REUTERS/Ali Jarekji

A number of months ago, in the midst of diplomatic stagnation, Knesset Member Nitzan Horowitz went to Jordan to participate in a convention on the subject of rehabilitating the southern Jordan River.

For the industrious and highly esteemed Horowitz of the left-wing party Meretz, one of the leaders of the struggle for environmental protection, this was another frustrating encounter with the regional reality. At the convention, the miserable condition of the river’s southern section was discussed.

“For many years, water has no longer flowed southward into the Dead Sea, because the dam at Tzemach is closed,” explains Horowitz. “This place could be a tourist site and economic asset yielding tremendous profits, but it is neglected.”

When he returned from Jordan, Horowitz began to consider a practical course of action on how to create productive cooperation with Israel's neighbors on behalf of environmental protection, without waiting for a diplomatic arrangement.

Since then elections have come and gone, Horowitz was re-elected to the Knesset and is now establishing a lobby for regional cooperation. The goal: developing and deepening contacts between Israel and its Middle East neighbors, even without diplomatic arrangements, that will extend to all spheres of life — economic, cultural, heath, tourism and media. This is the first lobby of this type in the Knesset. In an interview with Al-Monitor, Horowitz promised that it will be active and significant.

The establishment of such a lobby precisely now seems disconnected from the regional reality. Will you really have partners from the neighboring countries?

“First of all, I believe that every crisis contains the seeds of opportunity. I recognize this skepticism and I deal with it. On the one hand, there is no diplomatic process, and on the other hand, nothing is being done in the environmental or civil domain. The idea is that there are very important domains that require regional cooperation, which have deep importance even under conditions of diplomatic stagnation, and can be promoted. All the issues that arise from a specific geographic reality such as environment, culture, water, tourism and regional commerce — these can be dealt with, even when there is no diplomatic arrangement. Regional cooperation is vital, especially under such circumstances. Unfortunately, there are elements in Israel who run away from these issues due to the diplomatic situation, and the government doesn’t do enough. We can’t change the government, but we can cause it to do things by applying public pressure.

“We have the issues of the Dead Sea and the Jordan River. The Dead Sea is, after all, an international sea, and the Jordan River is half Israeli, half Palestinian. The Jordan River itself, that leads to the Dead Sea, has turned into a sewage ditch. It is in such horrible condition that my heart aches. Regional cooperation is needed to rehabilitate it. Both of the sides must rise above political considerations. In the Knesset’s upcoming session, we are already planning on holding a convention focusing on the subject of pollution in the Mediterranean Sea. That is important to us, to the Lebanese, the Syrians and Palestinians and anyone who shares the coast.”

From what countries will people come to the convention?

“Because of the diplomatic problem, they won’t come from Syria and Lebanon, but many other representatives will come — Palestinians, Cypriots and Jordanians. We are in touch with environmental organizations such as Friends of the Earth Middle East, an Israeli-Jordanian-Palestinian organization that is very active in rehabilitating the southern Jordan River and saving the Dead Sea.

“It is true,” admits Horowitz, “that the diplomatic disconnection makes it very difficult to hold joint projects. Nevertheless, there are many partners — Jordanians as well as Palestinians and Egyptians. There are also private companies, non-governmental research bodies and organizations who find this cooperation to be vital.”

In the past, systems were already established for regional cooperation.

“Forums for regional cooperation were established at the Madrid Peace Conference [of 1991], but these did not survive. Today, there is no one entity in charge of this domain that suffers from harsh neglect, and everyone loses out, without connection to political views. No one benefits from the situation. True, in Israel there is the Ministry for Regional Cooperation, but we don’t sense much activity on this matter. Their viewpoint is narrow and self-serving, thus losing sight of the big picture.

"I want people to understand that when locusts come from Egypt, this is a regional problem. To understand that borders are not hermetic seals — water, air, diseases and climate have no borders.”

Yet this vision still sounds unrealistic …

And how do you assess the chances for a diplomatic process?

“Aside from the optimism that [US] President Barack Obama’s visit left in its wake and several positive declarations on the Palestinian side, I don’t see that anything has moved in the diplomatic realm. Prime Minister Benjamin Netanyahu’s partnership with HaBayit HaYehudi leader Naftali Bennett and the extreme tendencies in the Likud itself block such a process.”

Horowitz hurried to add, “The regional reality does not wait. We now witness a very important development that can have a dramatic effect: The natural-gas deposits that were discovered in such large dimensions, and the anticipated profits from them, can change the face of the region dramatically. Such an opportunity has not come our way for years, but we need to know how to take advantage of it. The best way is through regional cooperation; otherwise, severe disputes will erupt.”