Knesset Member Ahmad Tibi, in an exclusive interview with Mazal Mualem, says that while there is a general consensus opposing an "armed intifada" by Palestinians, the situation is explosive and will deteriorate without diplomatic measures. 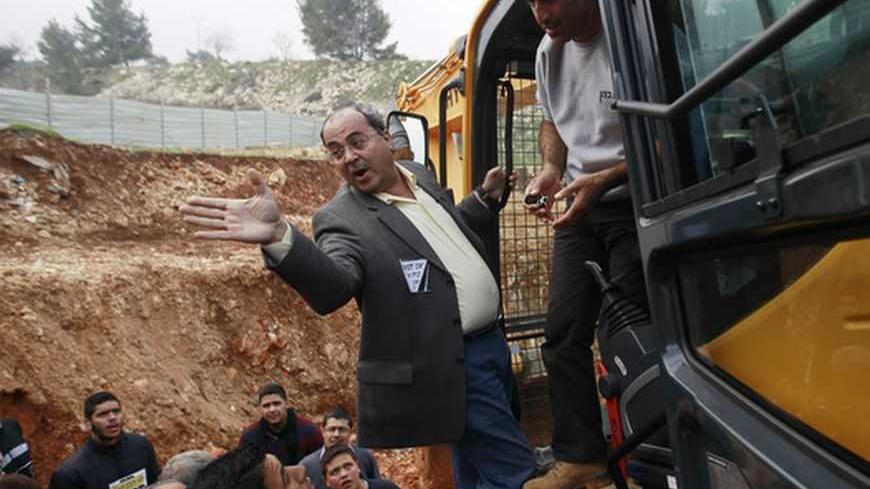 Israeli Arab Parliament member Ahmad Tibi (C) gestures as he stands on a bulldozer during a demonstration against Israel's construction of a road in the Arab neighborhood of Beit Safafa in Jerusalem Feb. 10, 2013. - REUTERS/Ammar Awad

On Monday night, Feb. 25 Knesset member Ahmad Tibi made his way from Ramallah to his second home in east Jerusalem’s Beit Hanina neighborhood, after spending most of the day recording promotional broadcasts for the Palestinian reality show "The Rais."

Outside the studio the streets were still raging in the wake of the death of prisoner Arafat Jaradat in the Meggido prison. Tibi told me he thinks that the riots breaking out in the West Bank are harbingers of the renewal of a popular Palestinian struggle. This kind of development, he says, will surely make "The Rais" a hit.

"The Rais" is the first reality show to be screened on a Palestinian satellite station. In a few days, the promos will blanket the streets of the West Bank, Gaza and Jordan, thus reaching millions of viewers. Nevertheless, Tibi does not need exposure. Already he is a popular figure on the Palestinian street and in the entire area. He was cast for the role due to his close familiarity with Yasser Arafat, the first Rais, whom he had served as a special consultant, and for his close contacts with the current president, Abu Mazen (Mahmoud Abbas).

In the program, Tibi is one of the judges of a team called the “Council of Sages.” They will choose one contestant out of 1,200 youths (half girls, half boys) who will compete for the title of “President of the Palestinian State.” Three other judges on the team are Palestinian legislator Dr. Hanan Ashrawi, Minister of Social Affairs Dr. Majida al-Masri and Ammar Aker, CEO of Jawwal Palestine Cellular Communications company in the West Bank.

Although Tibi has Israeli citizenship, he feels completely at home with these three Palestinians. After all, for years Tibi has felt comfortable splitting his time between Taibe and his second home in Beit Hanina, and between the Knesset and the offices of high-level officials of the Palestinian Authority. A few months ago, Tibi even served as advisor to Palestinian Authority Chairperson Abu Mazen, when the latter returned from the United Nations with international recognition of Palestine as an observer state. Thus, in the eyes of broad swathes of the Israeli public, Tibi immediately came under suspicion of collaboration with the enemy.

A week ago, on Feb. 15, Tibi participated in a demonstration opposite the Ofer Prison, a protest that was dispersed with tear gas. Several days later, Tibi took new Knesset Member Ofer Shelah from the Yesh Atid party on a tour of the Israeli Arab city of Taibe's industrial zone, in order to show him the shabbiness of the place from up close.

Tibi, as mentioned, in all the stages of his life has known how to move naturally between different worlds, to pinpoint trends and processes in formation.

At the end of the day on which we talked, the Israeli media reported a lull in the West Bank riots. The headlines on fears of a possible third intifada were replaced by Prime Minister Benjamin Netanyahu’s political trials and tribulations.

Were the rumors of a third intifada exaggerated?

“No one is interested in an armed intifada. The Authority’s official position is in favor of a popular struggle and nonviolent resistance. You have to understand that the issue of prisoners touches on Palestinian society’s most sensitive nerve, especially regarding those prisoners on hunger strikes — this cause unites our entire society. The support for this is sweeping. If one of the striking prisoners dies, the ground will burn under our feet. In the absence of a diplomatic horizon, it will probably be hard to control such a development.”

Do you distinguish initial signs of such a development?

“I identify anger and frustration. In the wake of the Arab Spring, some Palestinians say that if Arab countries brought down dictatorships, then the occupation can also be overturned. In spite of this, only a minority think that armed struggle is the way to go. The majority think that they can attain results with a popular struggle. There is a lack of desire on the part of the Palestinian leadership to adopt the armed option.”

In the promo for the Rais reality show, you speak of Abu Mazen almost in adoration, while here in Israel he is viewed as irrelevant, lacking power, someone whose time has passed.

“Abu Mazen is the partner. Anyone who doesn’t understand this is making a very big mistake and is squandering an opportunity, an opportunity that may not repeat itself, to conduct negotiations with a leader who is committed to the two-state solution and not an armed struggle.

“Abu Mazen told me that legally, our situation is different now because we are now considered a country under occupation, and therefore what was in the past is no longer. The former negotiations involving photo ops is finished. The Israelis prefer taking photographs over working on a diplomatic process with a result, and that causes tremendous damage. [Netanyahu] turns everything into public relations, and the Palestinians walk away empty-handed.”

As someone who is closely familiar with the “diplomatic process” in the last two decades, do you believe in renewal of the negotiations following [US] President Barack Obama’s visit?

“I think that the visit is important, but I’m not sure it will lead to a breakthrough because Netanyahu is not a real partner for peace. Bibi has not changed his ideology. He says ‘two states,’ but does not really think that way. Tzipi Livni joined him because she wanted to be convinced that he changed his position.

"The most serious, advanced negotiations conducted in recent years were between former prime minister Ehud Olmert and Abu Mazen. Contrary to some of the claims, Abu Mazen didn’t tell him ‘no.’ The thing was that Operation Cast Lead broke out in the middle.

"Netanyahu shatters the two-state vision every day, with the settlements. As usual, the Israeli chooses the third option, which is continuation of the status quo, meaning a deepening of the occupation and the apartheid regime in the territories occupied since 1967. Under such circumstances, the world will not continue to forgive the injustices of the occupation, as it did in the past. Today, the world is a bit more critical of Israel.”

Netanyahu and his entourage are starting to talk about an interim agreement.

“The concept of a ‘temporary state’ will not be accepted by the Palestinians, because nothing is more permanent than a temporary [state]. To the Israeli viewpoint, I don’t think that the Palestinian must stand with a stopwatch to establish a Palestinian state today, because the Palestinians have great forbearance and patience in this struggle. I believe that the solution of an independent Palestine will be forced on Israel if it does not initiate it first.”

As a member of the Israeli Knesset, don’t you feel that you are drawn into the Palestinian struggle at the expense of your work as an emissary of the Arab Israeli sector?

“I see myself as a political leader. I am not the head of a local council. I act on the political-national level as well as the social-local level. This morning, for example, I met with the parents of autistic children in Taibe who have no therapeutic framework for their children. Yesterday [Feb. 24], I went to the Gilboa Prison to visit Palestinian prisoners. I am not willing to waive my political-national activities, nor my social activities. For me, they go together.”

The low voting percentages among Arab Israelis proves that your public is alienated from you.

“I don’t recognize the expression ‘Arab Knesset Members.’ There are parties and there are people. I personally am satisfied with [my party’s] result because we increased the number of our voters, but it’s true that we could have done more. Almost half of the constituents sat at home, and this places the responsibility on our shoulders to continue to work on increasing the voting percentages.”

Tibi, like Arab Knesset Member Mohammad Barakeh from Hadash, who was interviewed on this site last week, also disclaims responsibility for the apathy of the Arab sector on election day, and turns an accusing finger toward the Israeli government.

“It’s not us, it’s the distrust of the Arab citizens toward the political establishment. For the sake of comparison, there was a 90% voter turnout in the elections for local [municipal] authorities, and I suggest to conduct the Knesset elections on the same day. Under such circumstances, the Arab parties would receive another six or seven mandates, and that scares someone here. When I suggested this idea of having both elections on the same day, to a high-echelon Likud minister, he asked me, 'Are you crazy, you will go up to 20 mandates that way.' That is evidently the reason, because I don’t see why the elections shouldn’t be on the same day. It would save the state coffers billions of shekels.”

What, in your opinion, can we deduce about the Israeli public from the election results? Things that you would advise Abu Mazen?

“I was sure that this Knesset would be a lot more radical right-wing, but the Israeli public proved that it is not gone over the edge, it can still stop the second before falling into the abyss.

"I imagine that I will have more partners in this Knesset than in the previous one. I have already taken Ofer Shelah on a tour of Taibe, and met with Yesh Atid leader Yair Lapid and Yesh Atid Knesset Member Shai Peron. The question is how many partners I have on the Jewish side to improve the circumstances of the Arabs.”