Knesset member Mohammad Barakeh, leader of the bi-national party Hadash, explains to Mazal Mualem why the most social justice-oriented party in Israel did not benefit from the fruits of Israel’s social-protest movement, and points an accusing finger at the government and the media for ignoring Israel's Arab citizens. 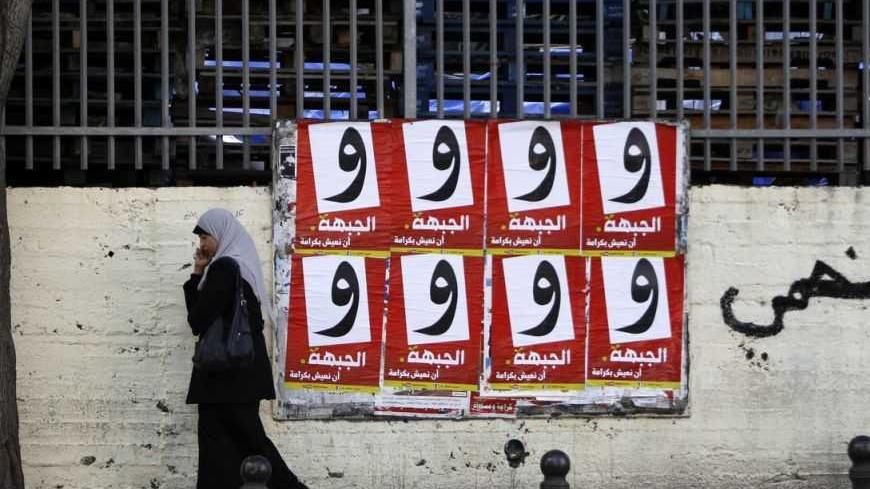 A woman walks past campaign posters for the Arab-led Hadash party in the Israeli-Arab city of Umm al-Fahm, Dec. 26, 2012. - REUTERS/Ammar Awad

Hadash was around long before social justice issues became trendy. The most social-justice oriented party in Israel has been dealing with these issues for decades, but in the recent elections, when the nation finally demanded social justice, the Jewish-Arab party did not succeed in reaping the fruits of the protest. Something went wrong; the elections left Hadash with only four mandates, exactly as in the outgoing Knesset.

The main reason for the failure of the bi-national party is the fact that it was not able to attract the youths who took an active part in the [social-justice] protest. Those youths identified with the protest movement but not with Hadash, which remained an ultra-nationalistic Arab party to them.

Young Jewish and Arab activists complained that the party did not assign more Jews to realistic places on the list, except for Knesset member Dov Khenin (number 3), and did not give a woman a realistic spot. This mention of a woman in Hadash reminds us of former party member Tamar Gozansky, an exceptional socialistic legislator who was responsible for dozens of laws passed in the Knesset in the domains of human rights and the rights of employees, women and children.

Internal criticism was also expressed toward the party chairman, veteran Knesset member Mohammad Barakeh, for conducting a conservative campaign that focused mainly on the Arab community. But the Arab community did not turn out in large numbers to vote for Hadash or for other Arab parties either.

I asked Barakeh whether the low voter turnout in the Arab sector is his personal failure, especially because Barakeh is known as one of the Knesset members involved in social issues. He hurried to cast all the responsibility on the “Israeli government that purposely causes Arab citizens to lose hope in politics and causes them to think that there’s no point to voting in elections.” According to Barakeh, this system means that Arab parliamentary representatives are channeled into service-providing activities – services that the state is supposed to provide. “We are excluded from the social discourse,” he explains, “The only time the media wants to interview us is when there is a terrorist attack. Either no one hears about our bills for social-justice legislation, or the government opposes them. Once Minister Benny Begin mounted the rostrum and presented the government’s position regarding a bill of mine; he showered it with praises and described it as most necessary – but at the end, he said that the government had decided to oppose it ... That is a common spectacle in the state of Israel’s parliament.”

Barakeh offers another example. “I submitted a bill banning the sale of alcohol in kiosks after 11 p.m. The bill did pass, but only after the government did everything possible to pass the version brought by the Public Security Ministry.”

You claim that the government intentionally prevents Arabs from representing their public, and prevents them from scoring achievements and getting credit for it?

“I call this exclusion. I claim that the government in Israel wants its Arab citizens to receive services individually, not as a group. The state does not recognize Arabs as a national minority, as a collective group. There are a lot of examples of this. The most striking case is the growing violence in the Arab sector. We demand that the state deal with the problem, it is its responsibility, but nothing is happening. We have the sense that the [police] turns a blind eye to the arms that inundate our settlements, and doesn’t really want to solve cases. In Tira, for example, dozens of people have been murdered in recent years, but not a single case has been solved. When you are witness to the efforts invested in eliminating crime in Netanya, you understand the big difference here. Because if these things were connected to national security, they would be solved in hours.”

And you, as a long-standing Knesset member and head of a party, are you not able to make a difference?

“As a Knesset member I can protest and submit bills. I am very active in community frameworks for example, but to fight this phenomenon you need a state, and the state is not there. They will come and tell me that it’s part of the conspiracy theory — that the State of Israel wants crime in Arab settlements. I say that the burden of proof that it’s not so, is on the state.

“The State of Israel prefers that the Arab public, as a discriminated-against and socially underprivileged group suffering from housing shortages, would deal with its own issues and internal disputes and not find time for the main battlefield — the national one.”

Barakeh points an accusing finger regarding the status of the Arab sector not only towards the “establishment.” “I think that the media is also responsible for our situation because it relates to us as transparent Knesset members. I sat in the Finance Committee for years, I pushed for important initiatives, but did not receive [media] coverage. That’s why I claim that the media and the government try to disseminate faceless pictures, faceless images of us.”

And what is your role in all this, the role of the Arab Knesset Members?

“Hadash did not become stronger, that is a fact. We have to examine the question, why we aren’t successful in penetrating the Jewish public. After all, there are many among the Jews who think like we do but they don’t reach us. I do not deny that a considerable part [of the failure] is also dependent on us, we will look into this.”

How did you manage to miss on the opportunity of the social justice protest?

“There is no doubt that it is very distressing and exasperating that we didn’t get any votes from the social-[justice] protest movement, even though we were very active in its leadership. It seems that even the middle-class is infected with quite a bit of racism — I know that’s a generalization, but when I look at where the middle-class vote went, I can’t help but come to that conclusion.”

“Yair Lapid was the Trojan horse of the right, in the camp of the left. He benefited from the slow trickle of votes, and then a day or two after the elections he already worked in tandem with [Prime Minister Benjamin] Netanyahu. People view Lapid as a centrist, but I say that if that’s true, then Israel’s political center is equivalent to the extreme right anywhere else in the world.”

Nevertheless, Barakeh notes that he is somewhat optimistic about the new Knesset members, “who reduce the extreme right-wing flavor of the Knesset.”

Are you also optimistic about [President] Obama’s anticipated visit?

“Obama has disappointed us many times. At his speech in Cairo University at the beginning of his first term of office, he sounded like the bearer of good tidings, but since then he only disappoints us. I don’t have much faith in generations of American administrations and I hope that now, under the pressure of the Arab spring, things will change.”

Do you have advice for him?

“First of all, to recognize the State of Palestine as a full member of the United Nations. That creates a different foundation for any diplomatic process. Under such circumstances, people will stop talking about ‘disputed territories’ but about an ‘occupied state.’ Then, negotiations will be conducted around the question of how to end the occupation, and Netanyahu will face the question: is there a parliamentary foundation to advance in this direction, or to go to elections? If Netanyahu will want to go in that direction, he will have a majority, together with Yesh Atid and the Labor party, and then we’ll also be in the picture.”

Is Netanyahu capable of this?

“I distinguish between ‘two Netanyahus’; the extreme right-wing ideologue, who is even more extreme than his party, and the opportunist who will do a lot of things in order to remain in office — including a diplomatic process.”

[Hatenua leader Tzipi] Livni is also joining Netanyahu’s government — does that seem like the beginning of something positive?

“What Tzipi Livni did was pure opportunism. It is the lowest type of political survival.”

You had a lot of meetings and talks with Abu Mazen, including over recent months. Have you succeeded in understanding from him, why he did not accept [then Prime Minister] Ehud Olmert’s most generous offer?

“I also had talks with Olmert himself, and both of them told me that they were very close to an agreement, and the dispute had to do with percentages of land-swaps. As opposed to Olmert, who went in the right direction, the Netanyahu government wants [diplomatic] process but without peace. The Israelis attack him [Abu Mazen] and try to paint him as a petty official waiting for a salary from the State of Israel, meanwhile they [the Israelis] continue with the settlements and the siege on Gaza. And the Americans distance themselves from the Palestinian issue.

“You have to understand that Abu Mazen is locked in an impossible equation. One has to have great forbearance to continue to lead the Palestinian nation, but he is a very astute person. He really wants to progress to the solution of a Palestinian state in the 1967 borders.”