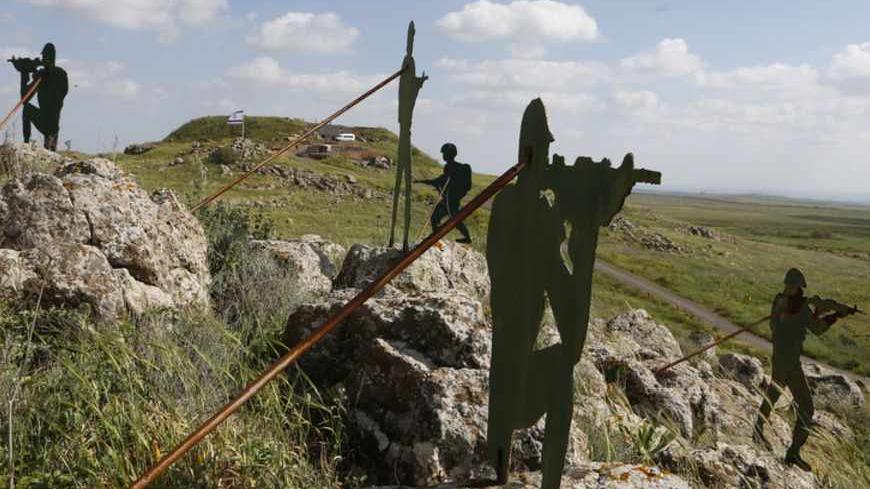 Sculptures are seen on a hill near the Israeli Syrian border in the Israeli-occupied Golan Heights, March 24, 2013. - REUTERS/Baz Ratner

Marking its 65th anniversary on April 15, the state of Israel can note with satisfaction that the threat that has accompanied it since its foundation — namely being occupied by an Arab army — has been lifted, at least for the foreseeable future. The Israeli-Palestinian conflict, which was the declared casus belli for all past wars, is overshadowed by a much larger conflict — the one between Sunni and Shiites. Facing its most significant threat — a nuclear Iran — Israel finds strange bedfellows: the Muslim Brotherhood.

A respectable British newspaper claimed earlier this week of April 7 that Syrian President Bashar Assad had withdrawn his forces from the Israeli border toward Damascus. But glancing through the binoculars reveals a different image: The border brigades are still deployed there, and unlike the situation in many parts of Syria, these Syrian units in the Golan Heights still function for all intents and purposes as an army. Notwithstanding, they no longer threaten Israel, and it is highly unlikely that they will in the foreseeable future, as this review of Israel's borders and neighbors will show. Having been poised for decades to stop a Syrian invasion or sudden seizure of the Golan Heights, the IDF's 36th Division no longer grapples with the issue of how to stop Syrian tanks from crossing the barricades. It is more concerned by the possible influx of refugees or the arrival of terrorists at the border fence that Israel is currently building in the Golan.

Next to this formidable fence, the one that was built in 2000 on the Lebanese border seems small and inferior. When Israel pulled out of Lebanon, that fence was considered cutting-edge technology. Today this is Israel's quietest border. The tables have turned: The once quiet Syrian border could turn into a terrorist front, whereas yesteryear's tense Lebanese border has quieted down. Yet beyond it awaits Israel's largest military challenge: Hezbollah with its massive stockpile of some 80,000 rockets and missiles. Nevertheless, the Hezbollah of 2013 operates not only under the deterrence achieved in the Second Lebanon War seven years ago [in the summer of 2006], but also under the constraints of its political standing in Lebanon. Headed by Hassan Mahdavi, the Revolutionary Guard's watchdogs, who have been chaperoning Hezbollah commanders for the last seven years, make sure that the huge military array that they had built in Lebanon will be put to use only when Tehran gives the order. Armed to the teeth with rockets, Hezbollah was built to ward off an Israeli strike in Iran, and if such a strike were to take place — the organization would be the retribution. These Iranian watchdogs make sure nobody opens fire — neither too early nor too late.

While serving as chief of staff, Israel's incumbent Defense Minister, Moshe "Bogie" Ya'alon, proposed to "let Hezbollah rockets gather rust." That strategy is further reinforced nowadays when Hezbollah is up to its neck with the war in Syria, struggling ever more to market itself as Lebanon's defender. Assad's fall will further weaken the standing of the Shiite militia, possibly forcing it to choose between becoming an unarmed political Lebanese party or remaining a forward armed Iranian division inside Lebanon.

While Israel is having a hard time identifying the "good guys" in the Syrian war, Turkey and Qatar appear to be supporting the sane forces of the Syrian opposition. Saudi Arabia continues to finance the extremist Sunni elements, while Turkey is attempting to create an alternative to Assad from among the Muslim Brotherhood and secular circles in Syria. Within the Middle East's new fault lines, ranging from the Shiites in Iran to the jihadists from Iraq, the Muslim Brotherhood emerges as the most reasonable alternative. Pitted against the Iran-Assad-Hezbollah axis is the more moderate Turkey-Egypt-Syrian opposition-Hamas axis.

Yes, Hamas too. Once considered part of the Shiite axis, the movement has taken hold in the new Muslim Brotherhood axis, postponing the jihad against Israel to a later date. The strong action Hamas has taken against the organizations which have been firing rockets at Israel in recent weeks shows that its interest is to maintain quiet, which is also what its Egyptian partners are demanding.

So no, the Muslim Brotherhood — be it Turkish Prime Minister Recep Tayyip Erdogan's AKP or Egyptian President Mohammed Morsi and Hamas — has not turned into "lovers of Zion" nor does it accept Israel's existence in the Middle East. However, it has come to terms with that fact, seeing more immediate common enemies, such as Shiite Iranians, Salafists or Sunni jihadists. The Muslim Brotherhood's rhetoric will forever sound acrimonious to Israeli ears, but given these two axes, Israel should know where its common interests lie.

Even if the apology to Turkey has not turned out well, for the time being, Israel should try to foster ties with Ankara with the understanding that connecting with the axis of the Muslim Brotherhood is critical given the ominous threat on the horizon — Iran's nuclear capability. Resuming negotiations with the one that is caught in the middle of these two fault lines — the Palestinian Authority under the secular PLO — could defuse many of the emotions among the new partners. It will also curb the rising temperature on the Palestinian street. Although it has not reached a boiling point, it is nonetheless starting to simmer.

Israel has given much weight to President Barack Obama's statements in Jerusalem on March 21 about preventing Iran from acquiring nuclear capability. In exchange, Israel has pledged to avoid action against Iran in the coming spring and summer. But when Israeli decision makers watch Obama's foreign policy team — to wit Secretary of State John Kerry and Secretary of Defense Chuck Hagel — they realize that by the fall of 2013 they will have to reconsider their decision: to strike or not to strike?

This decision will become clearer against the backdrop of understandings with the axis of the Muslim Brotherhood and negotiations with the Palestinian Authority.