Former Prime Minister Ehud Olmert has announced his intention to run again for office, but he may run into Finance Minister Yair Lapid, his protege and the son of his late best friend, writes Mazal Mualem. 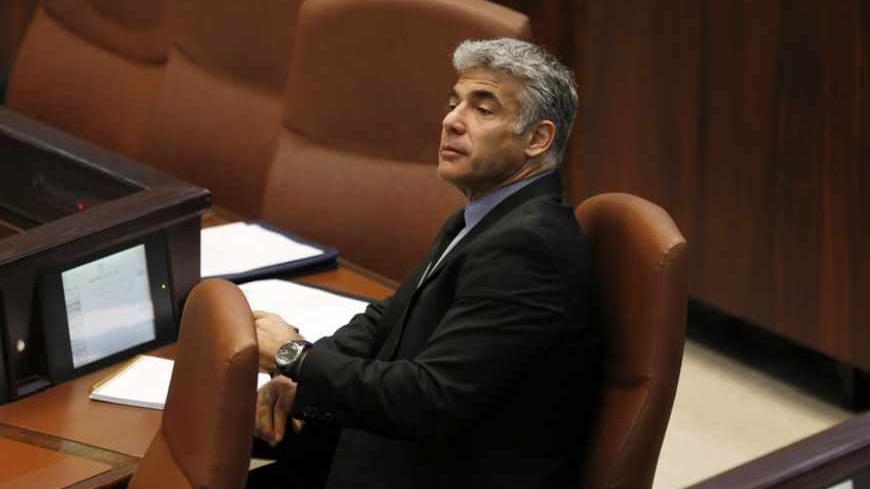 Israel's Finance Minister Yair Lapid attends the opening of the summer session of the Knesset, the Israeli parliament, in Jerusalem, April 22, 2013. - REUTERS/Baz Ratner

The announcement by former Prime Minister Ehud Olmert that he plans to run for office in the next elections should be taken seriously. This is an opening strategic move designed to position himself, as early as the next few months, as an alternative leadership candidate before the Israeli public and the world.

The Israeli daily Haaretz reported on April 24 that Olmert had declared his intentions two weeks ago at a closed-door meeting with Jewish businessmen in London and was greeted with thunderous applause.

Olmert has since returned to Israel and is in the midst of quiet preparations designed to move him back into the public eye, not just as a former prime minister, but also as an alternative candidate of the center-left political bloc against Prime Minister Benjamin Netanyahu.

Olmert does not plan to waste any time and will soon step up the pace of his media appearances, make pronouncements about central and principle issues and start building a political base composed of new and old forces.

Olmert is convinced that he is the most natural candidate to replace Netanyahu in the premiership. On the eve of the last elections on Jan. 22, he was close to making such a decision. He deliberated for weeks, but concluded that the time was not right. Two considerations led him to that conclusion: his trial, which had yet to wrap up, and the fact that he had been unable to enlist the support of all the necessary centrist political forces. Current Justice Minister Tzipi Livni rejected his offer to join him as his second in command, as did current Finance Minister Yair Lapid, the son of the man who had been Olmert's best friend, the late Deputy Prime Minister Tommy Lapid.

These events took place only several months ago, and much has changed since then. Lapid junior scored an impressive achievement in the elections and became finance minister. When he looks into the future, he sees Netanyahu’s chair in the prime minister’s office. Lapid went so far as to reveal this ambition in a television interview right after the elections.

Interestingly, the seeds of a behind-the-scenes political struggle between these two people are perhaps already being planted and will soon become public.

The ties between Olmert and Lapid are reminiscent of a father-son relationship and are known for their warmth. Lapid himself has spoken of the extent of this closeness on several occasions. For example, when asked for his opinion about Olmert’s legal entanglements, he refused to answer directly, instead saying, “Olmert was my father’s best friend, who supported him and my family when my sister was killed, and was by my side at his hospital bed. It was the most impressive demonstration of friendship I have ever seen.”

Olmert, too, as all those who know him can attest, loves Lapid very much and was privy to his indecision before entering politics. Together with Amnon Dankner, the former editor of the Israeli newspaper Maariv who passed away several weeks ago, he advised Lapid all along the way. They were close friends of Lapid senior, and after his death, they helped his son reach his current standing in Israeli politics.

People who have recently spoken with Olmert were left with the impression that at this point, he is not entertaining the possibility that Lapid will claim the leadership of the center-left bloc en route to the premiership. Olmert, as mentioned, loves Lapid but still regards himself as the only relevant player in the arena against Netanyahu.

Nonetheless, Olmert needs to understand that the situation is far more complex. It seems that for now, he prefers to ignore the complexity. First of all, things have changed since the last elections. Most of the public is enthusiastic about the new, young brand of politics represented by Lapid and his “bro' ” from the right, Trade and Industry Minister Naftali Bennet, leader of HaBayit HaYehudi. Of the two, Lapid is the more popular figure. He remains so even after assuming the office of finance minister, which requires that he make harsh budget cuts and hurt the middle class that just boosted him to the pinnacle of Israeli politics.

Polls conducted since the elections give Lapid 24 to 28 seats in the 120-member Knesset. If he makes it through his term as finance minister, those numbers will keep rising, and he would likely reach the 2017 elections on a peak of popularity. Olmert, on the other hand, despite being considered a good prime minister in hindsight, is not popular. He himself admitted as much in one of his speeches following the second Lebanon war, when his public support dipped to unprecedented lows. “True, I am not a popular prime minister” were the words he uttered at the end of his first year in office in March 2007.

Prior to the last elections, the inexperienced Lapid was careful not to present himself as a candidate for the office of prime minister. He acted wisely, unlike Labor Party leader Shelly Yachimovich and Tzipi Livni. By the time of the next elections, Lapid will have gained experience as a finance minister and a member of the diplomatic and defense cabinet and an understanding of weighty issues. The experience gap between himself and his father’s good friend will have gradually closed and, accordingly, the gap in their popularity will keep growing.

Lapid is the star. Olmert is perceived as a member of the old political order. Almost ironically, Olmert, like his despised rival Netanyahu, needs the new political order to prove itself inexperienced and arrogant and for the public to grow tired of it as well. In other words, Olmert needs his protege Lapid to fail in order to get back in the ring as the savior, because there is not enough room for both of them.

Mazal Mualem began her journalistic career during her military service in Israel, where she was assigned to the weekly army newspaper, Bamachane. After her studies, she worked for the country's second-largest Hebrew-language daily, Maariv. In 1998, she joined the English-language daily Haaretz, covering local governance, and later she was appointed chief political analyst for the paper. After 12 years with Haaretz, she returned to Maariv as its chief political analyst.