Israel's center-left parties have failed to unite, paving the way for Netanyahu to win a third tenure in the Prime Minister's office, argues Mazal Mualem. 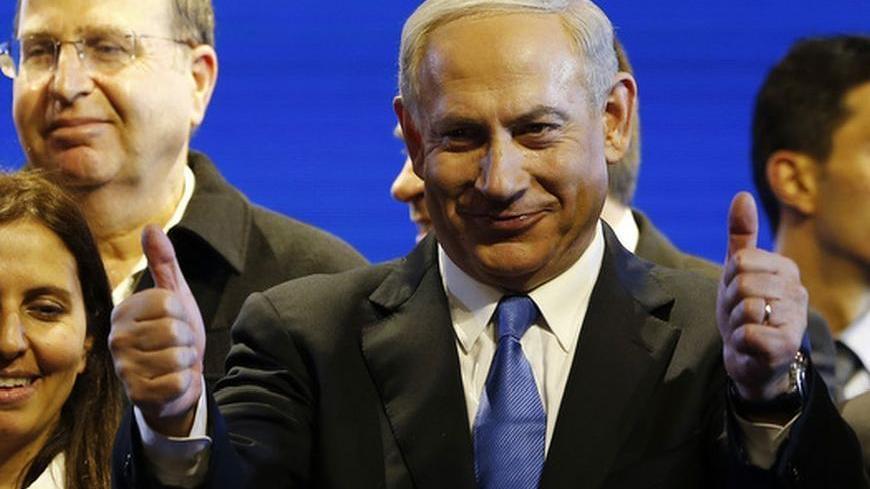 Israel's Prime Minister Benjamin Netanyahu (C) is seen during the launch of his Likud-Beiteinu party campaign ahead of the upcoming Jan. 22 national elections, in Jerusalem Dec. 25, 2012. - REUTERS/Ronen Zvulun

It sounds funny now. However, just a few weeks ago, Israeli Prime Minister Benjamin Netanyahu, driven by deep concerns over a likely alliance between the centrist and left-wing parties, was still undecided about whether he should call for an early election. The scenario of the opposition bloc forming a unified list, larger than the Likud, that may win the upcoming election and consequently the mandate to set up the next government has become a real nightmare for Netanyahu.

Having once experienced a most painful defeat — when he lost the premiership to Ehud Barak in 1999 after the center-left parties joined forces against him at the very last minute and beat him at the ballot box by a wide margin — his fears of a replay of such a scenario featuring a unified center-left coalition is quite understandable.

In fact, Netanyahu has lost many nights’ sleep over the possibility that Tzipi Livni, Shaul Mofaz, Shelly Yachimovich and Yair Lapid, as well as other as yet nonaligned figures, like former Prime Minister Ehud Olmert, will run on a joint ticket.

Netanyahu finally chose to announce the early election — but this, only after coming to an agreement with Yisrael Beitenu leader Avigdor Liberman on a Likud-Yisrael Beitenu merger. Netanyahu already held a first work meeting in New York with the leader of Yisrael Beitenu and American PR advisor Arthur Finkelstein, who laid out for the two their election campaign strategy. Thus, for fear of a center-left unification, the alliance of the Likud-Beitenu has come to life. Sounds funny, doesn’t it?

Retroactively, it seems that, far more so than the leaders of the center and left parties themselves, Netanyahu truly believed in the potential of a center-left bloc. Rather than wait to take a beating, he took proactive measures in advance; however, no one was out there to deal him a blow.

The reason for this is clear. Indeed, it calls to mind Barbara Tuchman's The March of Folly. The leaders of the left and center parties — Labor leader Shelly Yachimovich, Yesh Atid chairman Yair Lapid, Hatenua head Tzipi Livni and Kadima chairman Shaul Mofaz — failed to even negotiate the conditions for unification. And although public-opinion polls showed that the prospects of a center-left alliance to win vast electoral support were at least as good as those of the joint list of Netanyahu and Liberman — a situation which was bound to be a game changer — the leaders of the center-left parties could not put aside their egos and personal ambitions.

They all wanted to be in the lead. None of them was willing to make concessions to the others. As to their professed aspirations of toppling Netanyahu and bringing about a change of government, it looked as if they vanished into thin air, as the leaders of the center parties apparently no longer believed in the prospects of change.

Thus, for the first time in Israeli politics, no real alternative to keeping the prime minister at the helm has been presented. In other words, the center-left bloc has raised a white flag even without waging a fight, paving the way to Benjamin Netanyahu’s third tenure in the Prime Minister's office.

One can only imagine what could have happened had the center and left parties united ahead of the upcoming election, all the more so given the results of last week’s polls, which pointed to a decline in the popularity of the joint party of Netanyahu and Liberman, forecasting a mere 35 mandates or so for the unified party. True, Netanyahu still stands a fair chance of emerging as the victor in the election, but there could have at least been a real fight.

All that Netanyahu has to do now is select his partners for the next coalition. In the right wing, they openly voice their support for Netanyahu in the race for the premiership. At the same time, the leaders on the center-left side of the political map are quietly talking about an alternative. However, they too covet a ministerial post in the third Netanyahu government. Well, they will have to do some soul-searching following the election, when they are asked to explain why they have abandoned the arena to Netanyahu.

The absurdity of their conduct is revealed daily in the political confrontations in the media and in the numerous discussion panels held by the leaders of the center and left parties throughout the country in the context of the election campaign.

Thus, for instance, the representatives of the center and left parties met this week at HaRishonim High School in Herzliya and, addressing the audience from the podium, squabbled as usual about trifles. The speakers were Kadima Knesset Member Yohanan Plesner, former Labor party chairman Amram Mitzna on behalf of the Hatenua Party and ex-journalist Ofer Shelah on behalf of Yesh Atid.

At a certain stage, when the debate heated up, Plesner decided to lay the cards on the table.

“Why are we sitting in separate parties?” he asked his colleagues point-blank. “We should have set up a major centrist bloc. This should be our goal. After all, there are no deep ideological differences of opinion among us that justify division into separate parties.” However, as Plesner himself was quick to admit, “There is too much ego here and not enough leadership. Thus, instead of putting at the top of the agenda the future of the State of Israel and asking ourselves whether and how we can effect a change, we are abandoning the arena to Netanyahu and letting the election campaign revolve around the question of his coalition makeup.”

For a moment there, it seemed that those on stage agreed with every word. Briefly, they were silent.

But then they started bickering all over again.