The illusion of Ehud Olmert 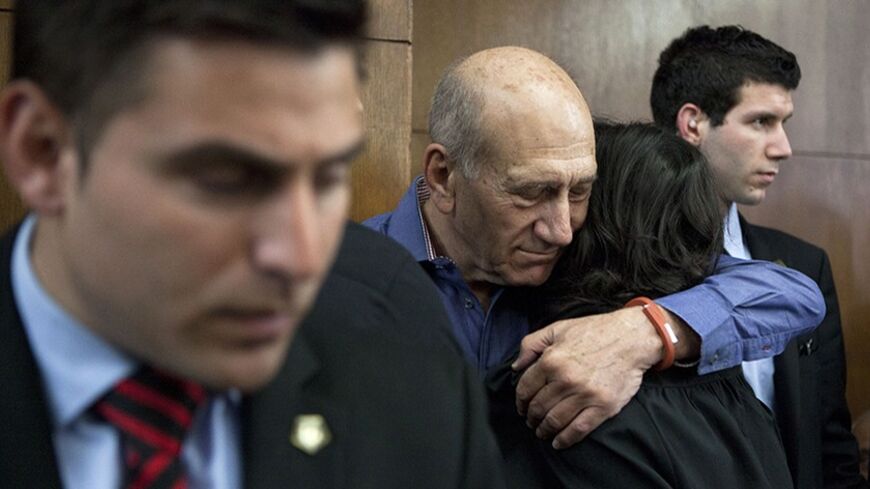 Decked out in a dark, meticulously tailored suit and a blue tie, Olmert spoke at length about his personal conversations and the relationship of trust that he was able to build with Abbas during their long meetings at his private home in Jerusalem. He also revealed new information about a plan which the security establishment prepared under his guidance, to evacuate the Jordan Valley in the event that an agreement with the Palestinians is signed.

Even if it wasn’t stated explicitly, Olmert appeared on that prestigious show as the leader of the Israeli center-left and the person who would face off against Benjamin Netanyahu in the next elections. His complicated legal problems weren’t even up for discussion, following a pattern that Olmert had stuck to intently over the last few years. He would only be interviewed about diplomatic issues, and he would be a constant presence in the political discourse, as someone who was planning to step back into the ring very soon. The same thing happened in January at an event at The Hebrew University in Jerusalem. Olmert referred to Netanyahu as an “idiot” for not making peace. The same thing happened also at other events at which Olmert was invited to lecture about diplomatic issues, as if he were perhaps holding in his hands the formula that could resolve the conflict.

That was the public face of Ehud Olmert during the past few years. He ran a low-volume campaign to return to the Prime Minister’s Office, he met regularly with key political and defense figures and managed his trial as if it were taking place in some parallel universe. With considerable adeptness, Olmert was able to roam the political-public-media world as if there were no criminal cloud hanging over his head, threatening to bring him down. The political and media milieu close to Olmert helped him to foster this status because it also regarded him as the alternative to Netanyahu, especially since there was no one else in the center-left who could really fill that role.

That is why the intense shock and surprise over Olmert’s conviction on charges of egregious bribery, which means that he will end up doing time in prison, were not limited to Olmert and his team of lawyers. It was felt by a whole group of politicians past and present, over varying levels of seniority and by the country’s top political and diplomatic pundits. They were all completely confident that the man who extracted himself from the various failures of the Second Lebanon War and from the Talansky and Rishon Tours trials, would skip over the “minor” setback of the Holyland Park trial with his emblematic nonchalance.

With the benefit of hindsight, all his many appearances, in Israel and around the world, as a candidate for the position of prime minister on behalf of the center-left in the next elections seem now utterly ridiculous.

It was an illusion that served both sides well: Olmert used that to create a balance of fear, albeit hidden from sight, with the legal system. He made it seem as if his “persecution” would have political consequences, so they should act with extreme caution when they come to determine the fate of the man running for prime minister. Furthermore, Olmert also wanted to return to the prime minister’s office because he thought that he was the best man for the job at this time. On the other side, were the politicians and journalists who considered Olmert to be the great hope of the left, who therefore fostered his image as a bold, wise and outstanding prime minister, and as a friend. That was why they were willing to overlook his central role in the failures of the Second Lebanon War and his entanglement in an endless series of corruption scandals.

As someone who considered herself to be a symbol of public integrity, Livni refused to give up the top slot in the new party that he planned to establish. On the other hand, she had no problem cooperating with someone against whom criminal trials were undergoing.

Mofaz, who was facing a nosedive in the polls, was ready to hand the leadership of Kadima over to him in an instant. And then there was Itzik, who pleaded with him to return.

The entire political system spent weeks waiting for Olmert’s decision as to whether he would run in the elections. He and his people fanned the rumors. Olmert even commissioned a poll and examined how appealing various public figures were to the general public, so that he could choose who would run alongside him in a new party headed by him. He was even in touch with some of them, directly or indirectly, including economist Manuel Trachtenberg and his close friends, the former head of the Shin Bet, Yuval Diskin, the former head of the Mossad, Meir Dagan, and the former IDF chief of staff, Gabi Ashkenazi. As part of the vocal opposition to Netanyahu from the ranks of the security services, they regarded Olmert as the one person who could save the country from the reckless Netanyahu.

Olmert’s conviction and the end of his political career also mark the end of that virtual group, which was supposed to costar alongside him in the next elections, in an effort to take the government.

But these weren’t the only people who considered Olmert to be the one person who could remove Netanyahu from the prime minister’s post. In private conversations that he had a few months ago, the former popular Minister of Communications Moshe Kahlon mentioned Olmert as someone he would have been interested in joining forces with in the next elections to topple Netanyahu. Kahlon even noted at the time that he would be willing to serve as Olmert’s No. 2 man in such a party.

Considering this, the silence of almost all of these politicians and public figures in the face of the severe tremors reverberating throughout the country in the wake of the former prime minister’s conviction on charges of egregious bribery, his perjury to the court and the cynical way in which he acted against the public interest for years should come as a surprise to no one. Most of them are his friends, or at least acquaintances of his in one way or another.

Particularly disappointing are the echoing silences of those who consider themselves the inerrant defenders of a clean new type of politics: Finance Minister Yair Lapid and Justice Minister Tzipi Livni. Lapid, who admired the intense sense of friendship demonstrated by Olmert toward his late father Tommy Lapid during the last, bitter days of his illness, has avoided giving marks to Olmert’s morality in the past. But that is just Lapid. As minister of justice, Livni is actually betraying the public’s trust by failing to respond to the conviction.

In fact, it was actually the general public that never considered Olmert to be the country’s savior. And that includes the public identified with the center-left.

Olmert managed to win the admiration and love of a certain political and media milieu, but he never managed to gain the admiration of the public or to earn its trust. The public never followed him en masse, and his election as prime minister in 2006 was the result of his having replaced Ariel Sharon and continuing in his footsteps. He later crashed at the polls, reaching his lowest point in the period immediately following the Second Lebanon War. None of the polls taken before the last election indicated that Olmert would be able to take off, and he won no more than 12 seats on a good day. As it turns out, in this particular case, the public managed to see beyond the veil and the citrus peel that concealed the real Olmert.