Ten years after the American-led invasion of Iraq, the fabric of Iraqi society appears to be more frayed than ever, as politicians exploit renewed sectarian sentiments for personal gain, reports Mustafa al-Kadhimi. 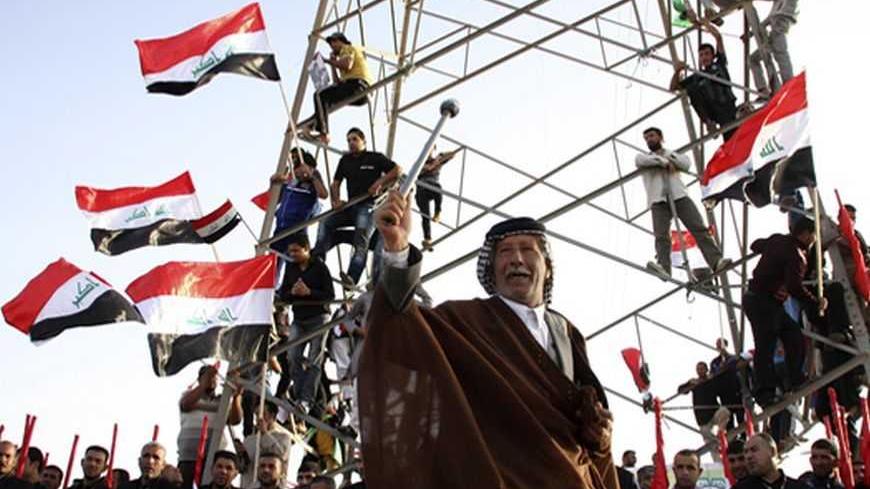 A supporter of Shiite cleric Muqtada al-Sadr takes part in a rally, which the participants said was against sectarianism and injustice, in Kut, 150 km (93 miles) southeast of Baghdad, March 16, 2013. - REUTERS/Wissm al-Okili

“When politicians fail to save the country from being torn apart and become a part of the conflict, attention is instinctively diverted toward social and religious leaders in order to achieve this goal.” This [unspoken] adage may not be conclusive, but the people always find solutions to their crises, which do not necessarily comply with the wishes of politicians. The current events that are marking the Iraqi scene 10 years after the ousting of the totalitarian regime, however, elicit a flashback to the starting point where “social and religious consensus imposes societal harmonization.”

The first objection will arise from the fact that religious figures and tribes are themselves a catalyst of political, religious and social rifts. In truth, both religious groups and tribes have merely been used as a scapegoat. Post-2003, a rigid political settlement was established between the politicians who used religions to protect their political interests, following the widely espoused principle that states: “If you wish to control the ignorant, disguise your actions with a religious coating.”

Religions have always served political interests, as demonstrated in the first letters sent by Abu Musab al-Zarqawi to al-Qaeda leader Osama Bin Laden about the Shiite rule in Iraq and the necessity to defend the Sunnis, as well as in the current speeches by the political elite that make liberal use of  the term of “sectarian strife.” Iraqi politicians — whether Shiites, Sunnis or Kurds — have sown the seeds of fear of “the other” in order to maintain their representative power.

Amid security and social turbulence that augur an impending civil war, Iraqis are once again holding the role of clerics in high esteem. Some religious figures are attempting to take on patriarchal roles that religion represents in society. In fact, Grand Ayatollah Ali Sistani has drawn a roadmap to solve the crisis through dialogue and a civil state. On the other hand, prominent Sunni Sheikh Abdul Malak al-Saadi has called on protesters to adopt a moderate discourse and maintain societal peace.

Recently, young clerics established the Iraqi Council for Interreligious Dialogue. This council includes Jawad Khaki, secretary general of the Khaki charity; Father Amir Jaji, the provincial vicar of the Vicariate of the Arab world; and Saad Salum, chairman of the Masarat Institute for Cultural and Media Development.

This religious council aims at uncovering the failure of Iraqi politicians who were incapable, after 10 years of harrowing experiences, to find common ground regarding important matters, such as the identity of the country and power sharing. Thus, religious figures must be offered another chance to maintain societal peace and prevent any dangerous, politically-driven scenario.

On March 14, the assault on the Ministry of Justice’s building adjacent to the Green Zone produced many casualties and brought up numerous questions that shed doubt on common denominators in Iraqi society, instilling distrust in the people for political purposes.

The delicacy of the situation does not lie in the ability of an armed group to storm into the ministry, take it over for an hour, bomb it, kill 30 people and wound 50 others, but in the fact that this operation has exposed an organization as dangerous as al-Qaeda feeding on the current political conflict to hide behind legitimate demands and present itself as the defender of Arab Sunnis.

Undoubtedly, peaceful protesters are not to be blamed for attempts by al-Qaeda to take advantage of their protests. Yet, the fingers must be pointed at the political class for allowing the politics that withstood intense duress for a period of 10 years to teeter on the brink.