The Muslim Brotherhood in Iraq has for years struggled to find a footing amongst many sectarian parties, but recent protests in Sunni cities have given them an opportunity, writes Mustafa al-Kadhimi. 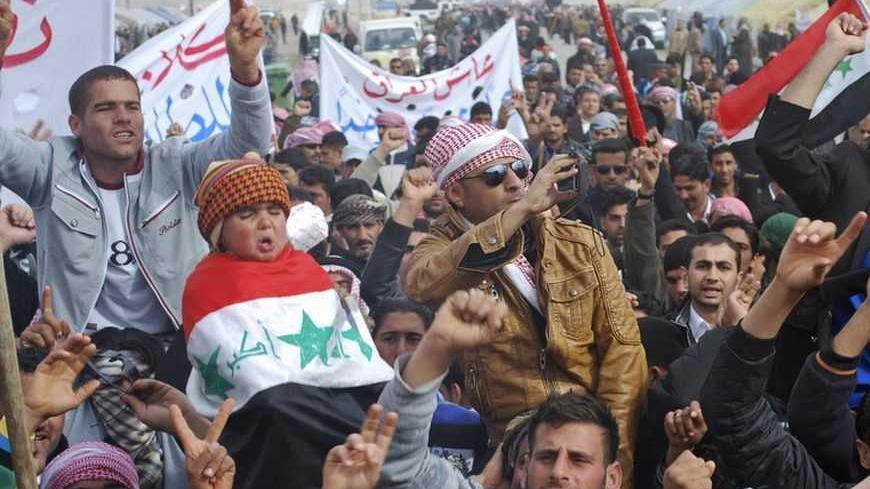 From 2010 until now, the Iraqi scene has grappled with a paradox that does not align with the Arab Spring protest movements. The Muslim Brotherhood, which rose to power in countries swept by the Arab Spring, found itself left out of the political game in Iraq since then. They lost the 2010 elections as their popular bases swept the al-Iraqiya list, which is led by a secular Shiite. Some of the leaders of this coalition are former members who withdrew from the Islamic Party, which represents the Brotherhood in Iraq.

Not only does this scene reveal the state of frustration plaguing the Brotherhood in Iraq after they dimmed while their counterparts rose in the Middle East, but it also largely explains why the party is clinging to the demonstrations that recently broke out in the Sunni cities. These protests started to demand specific rights, but they soon started to include slogans and ideas that took on a sectarian dimension. Tribesmen and politicians stopped addressing the protesters, and cleared the way for clerics who, for the most part, belong to the Iraqi Brotherhood.

The year 2009 was a turning point in the political fate of the Islamic Party. That year brought signs of the end of the party’s influence in Sunni cities, which the party used to represent in local governments and parliament.

The same year also saw the losses for the  party in local elections and ended with the split of a group of senior leaders. Chief among these was the former leader of the party and Vice President of the Republic, Tariq al-Hashemi, who is currently sentenced to death, as well as another group from the Accordance Front, which cleared the way for the Iraqiya List led by Iyad Allawi.

The fact that the party joined Allawi's list following the election results was a sort of declaration of defeat and a way of yielding to political work under secular, liberal and tribal leaders.

The Islamic Party's hopes soon rebounded with the start of the Arab Spring revolutions and the Brotherhood's political victories. The party’s desire to make up [for its previous failure] may be the main reason behind its support — or even embrace, as some suggest — of these demonstrations.

This is the only way to approach the nature of the recent Sunni demonstrations and talk about three kinds of demands that they are calling for:

First, a demand adopted by the liberal leaders of the al-Iraqiya List. This focuses on achieving national reconciliation and establishing closer connections with the Shiite Iraqis rather than moving away from them.

Second, a demand adopted by the Brotherhood leaders of the demonstrations focuses on starting an Iraqi version of the Arab Spring revolutions with the aim of monopolizing Iraq's Sunni constituency, if not changing the entire political system.

Third, a demand adopted by al-Qaeda militants and Baath organizations believes that the reality of the situation in Iraq, as well as the nature of the regime and the constitution, do not make room for a chance to overthrow the political process. This was voiced by the recent speech by the leader of the banned Baath Party, Izzat al-Duri.

In any case, this conflict does not rule out the fact that these demands are trying to join the legitimate demands of the demonstrators, most of whom are ordinary, downtrodden and unemployed people who are seeking to ensure social justice, criticize the security and judicial systems or complain about corruption and the country's failure to invest its budget in construction. Most of those demands are almost shared by all of the other Iraqi cities, and the Shiite ones in particular.

However, Iraq's official authority did not take this conflict seriously. It chose to use one of its facets (Baath and al-Qaeda) and decided to rely on a specific form of slogans and speeches which accompanied the demonstrations in order to justify its inefficiency in addressing the imbalances that led to these demonstrations and address them in a radical way.

The truth is that the Iraqi equation is extremely complex and includes historical, doctrinal, national and regional considerations that prevent the start of another version of the Arab spring in Iraq. This truth may be extremely dangerous because it sets the stage for a closed circle of future conflicts and paves the way for a bloody conflict that may not be limited to Iraq alone.

Mustafa al-Kadhimi is an Iraqi writer specializing in defense of democracy. He has extensive experience in documenting testimony and archiving documentaries associated with repressive practices. He has written many books, including "Humanitarian Concerns," which was selected in 2000 by the European Union as the best book written by a refugee.