Beirut on the Brink

With Lebanon's leading troika abroad for diplomatic sessions, sectarian rifts have begun to reappear, and fears are growing that Syria’s conflict could leak over the Lebanese border, writes Jean Aziz. 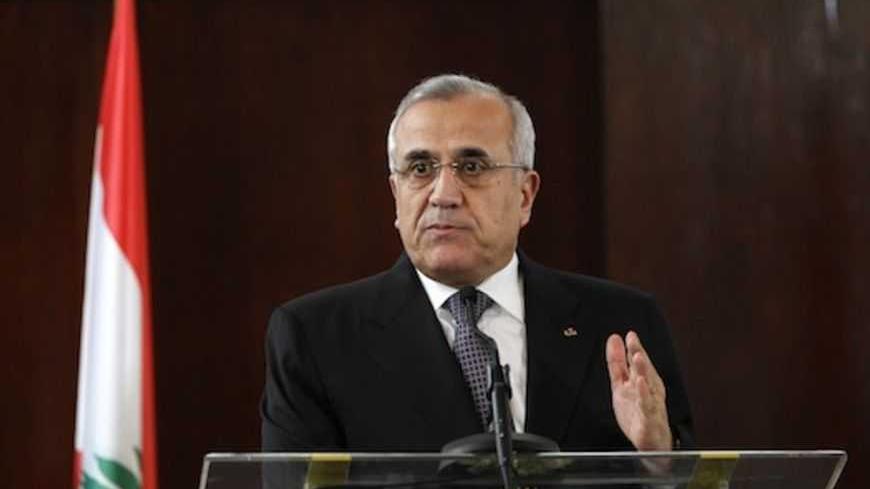 Lebanon's President Michel Suleiman talks at a news conference during a visit to the presidential palace in Abidjan, Ivory Coast, March 15, 2013. - REUTERS/Luc Gnago

After a week of complete political paralysis because of the absence of Lebanon’s officials, who are currently traveling abroad, and amid an overall escalation in tensions across society, Beirut is set to resume addressing its most pressing obligations on the electoral, economic, security and military levels. Many Lebanese politicians have openly declared that the countdown has begun to a security meltdown if a settlement is not reached.

The last thing Lebanon needed was an attack by kids on four Sunni clerics in Beirut and the city’s southern suburbs on Sunday, March 17, which prompted a wave of riots and roadblocks in most Sunni areas.

The country has since been on alert, as if the lightning of sectarian strife has struck the country again.

The unexpected security incident, which all politicians rushed to condemn, happened amid a long series of crises. If these aren't resolved this week, further escalation could result.

At the sectarian level, the assault on the Sunni sheikhs coincided with pleas from Alawite officials in the area of ​​Jabal Mohsen — an Alawite neighborhood in the city of Tripoli — concerned about a possible meltdown of the situation in the northern capital. In the past few days, fundamentalist Sunni militants succeeded in tightening their siege on the Alawite district by closing its last gateway to the east. This was the only outlet the Alawite ghetto had in the direction of the Christian area of Zgharta, which is adjacent to Tripoli. As a result of the siege on the city’s Alawites, there was renewed talk about a possible resurgence of violence, perhaps the fifteenth such round in the city since May 2008. The only difference today is the possible penetration of the Alawite neighborhood, which could produce a seriously bloody aftermath.

As Tripoli reeled under the Sunni-Alawite conflict, the northern border of Lebanon — particularly the Akkar region — followed the developments of the Syrian civil war and its possible spillover to Lebanon. Sunni-Shiite tensions this week extended towards the Bekaa area to the east and south. The Syrian Foreign Ministry delivered an official letter to Lebanon complaining about the infiltration of a Sunni jihadist group from northeast Lebanon to Syria — which clashed with the Syrian army in the Homs countryside — and the Syrian opposition announced that it had managed to kill the commander of Hezbollah militants, who had been fighting in defense of Lebanese Shiites living in Syria. This reflects the overlap of the Lebanese-Syrian border and the complex presence of Lebanese and Syrians in multiple parts of Lebanon's eastern border with Syria.

The Free Syrian Army (FSA) announced that it had killed the man it considered "commander of the Abbas Brigade.” This brigade, according to the FSA, is a Hezbollah armed unit fighting inside Syrian territory. Hezbollah announced that it was holding the funeral for one of its members, Hassan Nimr al-Chartouni, age 25, in his hometown of Mays al-Jabal in southern Lebanon. His funeral was held in the presence of Hezbollah Member of Parliament Ali Fayyad, Hezbollah party officials and officials from the Amal Movement, led by Lebanese Speaker Nabih Berri. The Syrian opposition also discussed the killing of 38 Lebanese Shiite elements inside Syria in the past two days.

Meanwhile, Hezbollah has adhered to its policy of not commenting on these incidents or providing additional details. The party only stated that one of its members "died while performing his jihadist duty."

In the south, the fundamentalist Sunni Sheikh Ahmad al-Assir continued his weekly escalation by holding sit-ins and threatening to block the coastal road between Beirut and the south.

Under the current security-sectarian situation, the Lebanese cabinet will reconvene on March 21 in hopes of containing the situation and of tackling two other heated issues. The first is pending parliamentary elections, which are stalled due to the inability of parliament to approve a new electoral law. The second issue is a salary increase for public sector employees. Lebanon's state employees have been on an open strike since Feb. 19. The Lebanese government believes that Lebanon’s financial and economic situation cannot withstand increased salaries, given an expected decline in economic growth this year of around 1.5%, and the sharp drop in the budget deficit and public debt compared to the gross national product.

The situation in Lebanon seems poised to melt down at any time. This prompted the U.N. Security Council to issue a statement warning of the serious situation in Lebanon and a possible spillover of the war from Damascus to Beirut. The U.N. statement was somewhat reassuring to the Lebanese. The citizens of this country, which was created by the consuls of foreign countries between 1865 and 1920, still believe that little can happen in Lebanon without an external decision. They believe that as long as Lebanese stability remains an international demand — as the U.N. statement suggests — internal threats will be nothing more than intimidations designed to enhance the positions of local parties in any externally imposed negotiation.

Tomorrow, March 20, members of the so-called Lebanese troika — the president, prime minister and the speaker — will return from Rome to Beirut. They are expected to have made prescheduled diplomatic contacts with European and U.S. officials. If the president calls for a dialogue between the poles of Lebanese politics of all sects — which have been suspended since Sept. 20 — the external influence on Lebanese stability will again prove true. If no invitation for dialogue is made, this means that Beirut has once again reached the brink.