Ali Hashem presents a Lebanese Army officer's insights into the prospect of growing domestic instability and the Syrian conflict's spillover into Lebanon. 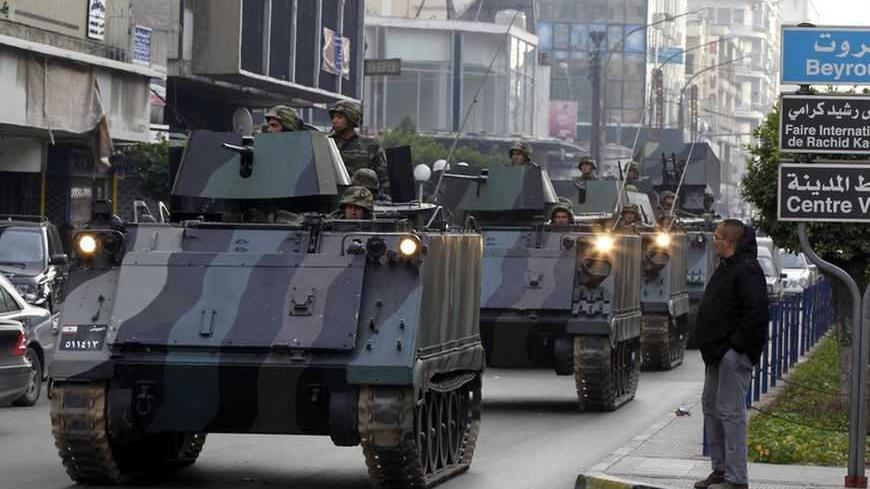 Lebanese Army soldiers deploy in Tripoli after gunmen ambushed the convoy of Faisal Karami, minister of sports and youth in January 2013. - REUTERS/Mohamed Azakir

It is said that whenever it rains in Syria, the Lebanese have to open their umbrellas. At the moment, it's raining bombs and bullets in Syria, so Lebanon must bleed as well. A recent incident — on Feb. 1, when two Lebanese Army soldiers were killed in an ambush while pursuing a suspect in Arsal, near the Syrian border — was an indication of Lebanon’s potential to inch closer toward the brink. If movement continues, the army will have much more to worry about.

‫ During the Lebanese civil war, the various political factions all agreed to keep the military out of their differences. For years, the army was one of a few untarnished symbols in the country. This status allowed two army chiefs to be elected president in the past 15 years.

‫ Today the Lebanese armed forces — known to be the smallest, poorest, and weakest military in the region — find themselves in the middle of two major problems in the region: the Syrian civil war and the Arab-Israeli conflict. Members of the military leadership are naturally concerned about the potential effects of regional unrest on Lebanon. One senior commander, who spoke on condition of anonymity, complained that the “challenges are often far beyond the army's capabilities,” although he still feels confident in the establishment's ability to defuse local flashpoints.

“We are able to control the southern border with Israel and keep it quiet,” he said while also noting that this area might be the third item on his list of priorities. “The resistance isn't interested in conflict, and neither are the Israelis, though we still have to make sure 15,000 soldiers are in the south,” the officer stated. This figure represents 25 percent of Lebanon’s military personnel, which leaves the army with only 45,000 soldiers for contending with its main priorities — local unrest and the Syrian civil war’s implications for Lebanon.

‫ In 2012, Lebanon experienced a number of troubling incidents, most of them in Tripoli, not far from the country's northern border with Syria. Local militias in the city have shown signs of resurgence as a result of the flow of weaponry to and from Syria. For the moment, Lebanon breathes to the rhythm of Syria's civil war.

“The situation in Tripoli is linked directly to the Syrian conflict,” the officer said. He added that the army has exerted pressure on political factions to try to control those over whom they have influence.

The conflict in Tripoli involves Syrians, with pro-regime Alawites residing in the Jabal Mohsen neighborhood pitted against pro-opposition Sunnis from the adjacent Bab al-Tabaneh community. Interestingly, the street dividing the two neighborhoods is called Syria Street.

‫ In 2012, clashes in Beirut between pro-March 8 and pro-March 14 militants threatened Lebanese stability to the point that the army had to intervene. According to the senior commander, "A clear message was conveyed to all parties: Security comes first." He explained that the political factions will continue to jostle for position, sometimes pushing their differences to the brink, but the country would not slip into civil war because the parties realize it would not take them anywhere except to a roundtable.

‫ This is the same type of table the Lebanese Army hopes will be brought into play in Syria. The war on the other side of the border continues to cast its shadow across Lebanon. The Lebanese Army's main task at this point is to thwart arms smuggling and infiltration by Syrian rebels. The officer admitted, “It's a difficult task given our difficult terrain and un-demarcated boundaries.” He believes Lebanon will definitely pay the cost of any spillover because politics in Lebanon remain linked to Syria. If there are indeed costs to Lebanon, perhaps it will be possible to keep them low. As the officer noted, "The international community wants stability in Lebanon. The US, Europe, the Arabs and Iran, they want Lebanon stable."

To this end, the commander pointed out that the United States had given Lebanon some $150 million of military aid for 2013. The assistance included armored personnel carriers, six helicopters, a new coastal protection craft, more than 1,000 guns, and millions of rounds of ammunition. This is the most generous US military aid package for Lebanon since the two states entered into a partnership; it was approved despite fears by some in Washington that the weapons might end up in the hands of Hezbollah. On the possibility of such a transfer, the commander replied, “They know this will not happen.” He continued, “Hezbollah doesn’t need our arms. They have their own, maybe ones much more sophisticated than what we have.”

‫ Everyone, the Lebanese as well as regional and international actors, acknowledges that if it were not for the Lebanese armed forces, the current situation could be much worse than it is. They also know that generally, even if the army itself is targeted, it will not cause too much pain. Any attacker will stick to the rules of the game and only engage to a certain point. It is only in Arsal that this did not work, as those who ambushed the army patrol did not appreciate the potential consequences — or maybe they did and that's why they acted.

Ali Hashem is an Arab journalist and chief correspondent of the Al Mayadeen news network. Until March 2012, he was an Al-Jazeera war correspondent, and prior to that he worked as a senior journalist at the BBC.