Bahrain’s opposition is working overtime to woo the West to its cause, but it would be better served forging local and regional links, Omar al-Shehabi writes. 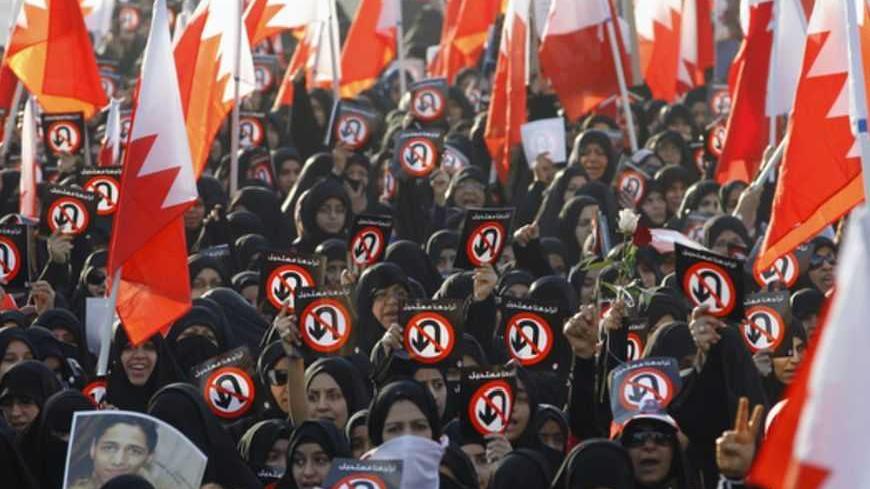 Protesters hold banners with sign "No U Turn" meaning "No Returning Back" and hold Bahraini flags as they participates in a rally organized by Bahrain's main opposition society Al Wefaq, in Budaiya west of Manama, Bahrain, Feb. 6, 2013. - REUTERS/Hamad I Mohammed
March 11, 2013

The future of Bahrain will to a large extent be determined beyond its shores. This seems to be taken for granted by most Bahrainis. Sandwiched between the regional powerhouses of Iran and Saudi Arabia, and with an important American base and a British colonial legacy thrown into the mix, Bahrainis are strongly aware of the role of forces outside their borders.

The role of probably the most important of these actors has recently been receiving increasing attention. Traditionally, the turf of the West, particularly the Americans and the British, has been completely written off by opposition activists, seen primarily as the safe terrain of the government.

Not so since the explosion of February 2011. The opposition has done a remarkable job of reaching out to international organizations in the West since then, including human rights groups, media, labor unions and academic institutions. Indeed, it seems that the only Western group the opposition has not yet been able to woo is Western governments themselves. Even these have been regularly meeting the opposition, often not even bothering to inform the government beforehand.

Two recent events have shone the spotlight and raised questions on the role of Western organizations in Bahrain. The first is the latest visit by Human Rights Watch to the island. The delegation was given access to prisons, including meeting the most high-profile political prisoners. Representatives of HRW took pictures of the prisoners and published them, the first time this has happened since their imprisonment two years ago. For added value, they then held a press conference locally, lambasting the government for the lack of meaningful reform.

This was welcomed by the majority of the opposition. Naturally, this did not sit well with the government, calling publishing the pictures interference in local matters and a violation of local law. It also did not please some of the “opposition to the opposition,” prompting accusations of neo-imperialism and howls of a holier-than-thou attitude, pointing to the comparatively vapid statements put out by the same organization on Israel, for example.

The second flashpoint was an interview by an activist with the Israeli paper Yediot Ahronot, creating a storm within both the opposition and their detractors regarding normalization with Israel. Both of these events raise greater questions regarding how much cooperation there should be between activists and the West, and where the line should be drawn.

The problems of Western involvement have strong resonance in Bahrain, and it is one of the main objections raised against the opposition’s current tactics and methods. Many detractors have reached the point of believing that there is a Western conspiracy to change the region along sectarian lines. The emergence of such theories should not be dismissed outright, as their emergence has strong historical resonance due to Bahrain’s colonial past and current Western involvement.

I recently sat down with two activists with a history in leftist anti-imperialism organizations, who nowadays fund their activities through US-backed organizations like the NED and MEPI. I asked them whether they saw any problems with this. One shrugged and said that these bodies were the only ones willing to fund them. The other was openly proud of his collaboration, saying that they are a force for good in the region.

The opposition has its reasons to work with Western NGOs and media. It should not be forgotten that in the darkest times, the so-called “National Safety” in Spring 2011 when imprisonment and torture were rife, they were nearly the only ones who caused a stir and provided support abroad. They still continue to be the biggest headache to the government, and the opposition contends that were it not for this Western non-governmental pressure, the situation on the ground would be much worse. Indeed, many Westerners genuinely risked themselves to offer help, and many within the opposition are grateful.

Some go much further than simply seeking Western NGOs support, taking a real-politik approach. Since Western governments, they contend, are the ultimate “security guarantors” in the region, why not go straight for the jugular and try to influence them to be more pro-opposition? They say the US leadership, after all, is not a monolithic bloc, with individuals in the Senate having different interests from the State Department or the Pentagon, and these fissures should be used to the opposition’s advantage. Indeed, some leading US figures, including Eliott Abrams of the Council on Foreign Relations, have openly been meeting with opposition activists and advocating for more Western action.

It is important to draw a distinction between NGOs' and Western governments’ support. It should not be forgotten, after all, that the US government led the occupation of Iraq, continues to authorize drone attacks in Pakistan, has a strong military presence in Afghanistan and gives cover for the Israeli occupation of Palestine. It should also not be forgotten that they are the final “security guarantors” in the region, which ultimately places them on the Bahraini regime’s side. And even if the US administration pressed Bahrain for reform, this would not fundamentally change one of the most severe problems that shackle the region, which is Western dominance over its affairs. This will eventually need to be addressed if the region truly wants to emerge as a democratic, sovereign entity. Where should the line be drawn between Western NGOs and governmental support, however, given that the line between the two can often be considerably blurry?

There are no easy answers to these difficult questions and the contradictions they reveal. Currently it seems certain that activism geared toward Western NGOs and governments will continue to dominate the international work of the opposition, simply because it is where they have the most exposure and have established the strongest links. One fundamental issue that has received little attention so far, however, and is arguably the Achilles heel of activists in Bahrain, is the relatively weak cross-solidarity network in the Gulf and the wider Arab world. Beyond sect-based solidarity, there has been little cooperation by activists in the region.

There are signs that this is changing, however. There are activists unhappy with the situation in their countries in nearly all of the Gulf countries. Calls for change exist in Kuwait, UAE, Oman, Saudi Arabia, Bahrain and even Qatar. Although it currently seems like daydreaming through rose-tinted glasses, a strong “historic bloc” across the region, one that is able to transcend sect-based and regional differences but that also takes account of local factors, is the only way forward if activists are looking for lasting change.

Although there are significant differences across the GCC countries, they ultimately face similar fundamental problems of autocratic rule, oil over-dependence, bubbling sectarianism and reliance on the West for military security. Buds of such cross-border regional activism have been appearing, but such solidarity needs to become the priority in the Gulf if activists are looking for sustainable change that does not fall into a sectarian Western-dominated quagmire. How to balance activism focused on the West versus that geared closer to home is a debate that urgently needs to be opened, and the two options need not be mutually exclusive. Going West may be appealing short term, but home is where the heart — and the future — must ultimately lie.

Omar al-Shehabi directs the Gulf Centre for Development Policies in Gulf University for Science and Technology, Kuwait. Previously he worked in McKinsey, the World Bank and the IMF, and as a lecturer in University College, Oxford. His research interests lie in the political economy and demography of the GCC, as well as Bahrain's modern history. He can be reached at @omaralshehabi.