Why Is Obama Rushing to Israel?

It is hard to believe that the announcement of the US presidential visit to Israel isn't timed with Israeli Prime Minister Benjamin Netanyahu's negotiations on a new government, writes Akiva Eldar. 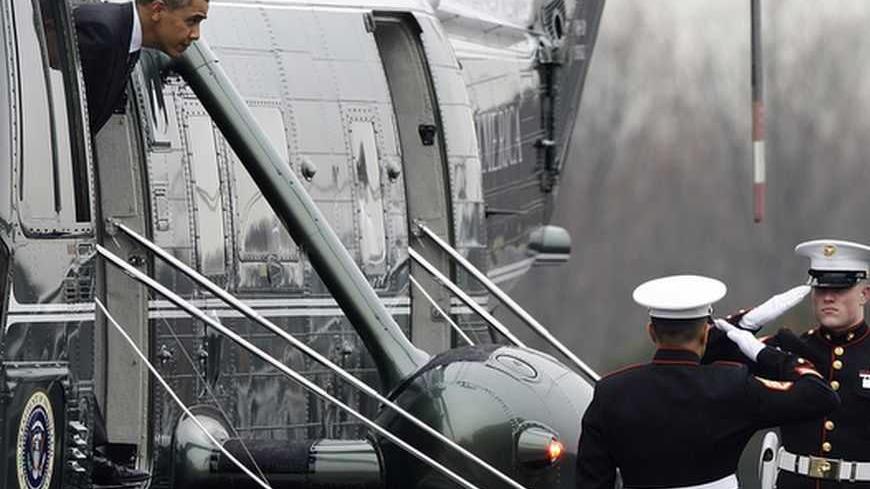 US President Barack Obama arrives via Marine One at Leesburg Executive Airport to delivers remarks nearby at the House Democratic Issues Conference, in Leesburg, Virginia, Feb. 7, 2013. - REUTERS/Jonathan Ernst

Why is President Barack Obama in such a rush to come here next month? Why, at the beginning of February, did he hurry to announce a visit planned for mid-March; why doesn’t he give the new government 100 days' grace to consolidate its policies? After all, we are talking about vital issues such as the state’s permanent borders, its security, its relations with its neighbors and the uprooting of tens of thousands of people from their homes. In the four years of Obama’s first term of office, he didn’t set foot here. Even when he visited the neighbors — in Turkey and Egypt (remember the Cairo speech?) — he passed up a courtesy visit to Jerusalem.

President Obama will not get to Jerusalem and Ramallah before the swearing-in of the new Israeli government. That complex task may only coalesce into a coalition agreement at the last minute, in the middle of March.

It is hard to believe that White House officials and Washington’s State Department are unaware of Prime Minister Benjamin Netanyahu’s political schedule and the tremendous challenges that await him. We can assume that the decision about the timing of the visit, as well as the decision to break the news in the midst of the coalition negotiations, were not made offhandedly. Out of my longstanding familiarity with American procedures, decisions such as these are usually made only after much consideration, discussion and planning. In my mind’s eye I see the president’s advisors browsing daily updates from the embassy in Tel Aviv, including selections from the Israeli press on the coalition negotiations. They, too, have probably discovered that a magnifying glass is needed to find the words “diplomatic process,” “peace negotiations,” “permanent agreement,” “security arrangements,” “evacuation of settlements” and any other expression related to the Israel-Palestinian conflict. On the other hand, they are finding a profusion of expressions along the lines of “equality in sharing the burden,” “middle class” and “social justice."

It is indeed hard to believe that the timing of the announcement of the presidential visit is disconnected from the coalition negotiations. This is a clear message from Obama to Netanyahu: “Hey there, wait a minute. I’m here too.” For the first two years of Netanyahu’s term of office, he enjoyed the effect of his Bar llan speech. In his last two years, he benefited from the fact that Obama neglected the Israeli-Palestinian political process for the sake of his re-election campaign for his second term of office.

Now, says Obama to Netanyahu, the time has come to settle the debt. And in cash, if possible. “The two-state solution,” the slogan declaimed by the prime minister all the way to his third term of office, now sits at his front door.

By the very announcement of his visit, Obama automatically founds a new reality — a new list of priorities for the coalition negotiations. The American president is trying to remind Yesh Atid Chairperson Yair Lapid that the term “equality in the burden” also applies to the “burden” of formulating a pragmatic coalition in the Middle East. With all due respect to the burden of military service — and I do mean respect — someone has to deal with the burden of a permanent agreement between Israel and the Palestinian Authority. Someone also has to deal with the burden of Iranian nuclear plans. Basically, Obama is suggesting to Labor party leader Shelly Yachimovich to re-think her winks to the settlers and re-evaluate her stance regarding joining the government. Who knows, maybe at the end she will propose to her friends in the party who miss the front table in the Knesset plenum to join the coalition negotiations — when they are equipped not only with the socioeconomic agenda, but also with a map of permanent borders between Israel and Palestine.

Obama does not have to exert himself to formulate his coalition agreement with Netanyahu on the Palestinian issue. The Israeli partners also don’t have to sweat. Everything is written in the decisions of the Eight-Minister Forum from October 2011, to adopt the Quartet’s proposal for a final status agreement. All they have to do is copy that government decision. A reminder: the guidelines that were authorized by the Eight-Minister Forum required the Israelis and Palestinians to submit their proposals on the subjects of borders and security within three months. The guidelines also called on the sides to avoid taking provocative steps to ensure the effectiveness of the negotiations.

Netanyahu, who avoided even bringing his own Bar Ilan speech for government approval, did not hold discussions, not even in the Eight-Minister Forum, on the permanent-border issue. He sent his attorney, envoy Yitzhak Molcho, to a meeting with the Palestinians, when in his hand was a trite list of 21 “subjects for discussion.” Dr. Yoaz Hendel, then-director of communication in the prime minister’s office, joined the meeting with the Palestinian side that took place in Amman. Instead of a document on the subject of borders, he brought a detailed list of incitement instances against Israel in the Palestinian media.

The Quartet, headed by president Obama, was forced to make do with the Palestinian position papers (including 1967 lines with mutually agreed land-swaps of 1.9% of the West Bank; the stationing of an international force in the Jordan Valley and demilitarization of Palestine). But Israel didn’t sit idly twiddling its thumbs; in the past year, the Netanyahu government promoted the provocative plans for constructing thousands of housing units in the E1 area in order to connect Maale Adumim to Jerusalem, planning committees approved the expansion of Jewish neighborhoods in Jerusalem beyond the Green Line and the civil administration intensified the removal of Palestinian residents from sections of Area C that were declared “fire-practice areas.”

It is only a shame that Obama did not shake up the political system and push the Israeli public into the diplomatic ring before the ballot boxes opened. But better late than never.