'There Is No Future Here,' Worry Tunisians

Ali Hashem reports from Tunis that Tunisians are in despair about the future of their country. 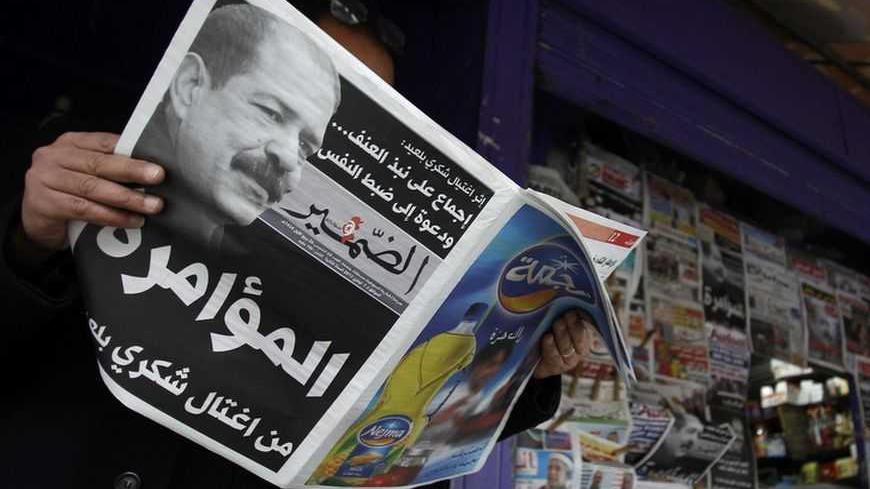 A Tunis newspaper displays a picture of assassinated opposition activist Chokri Belaid on Feb. 7, a day after his murder. - REUTERS/Zoubeir Souissi

Tunis — Politics is probably the only subject debated 24/7 in Tunisia. Taxi drivers, journalists, people in cafés, even sports commentators have been linking football to what is happening in their country.

On my way from the Tunis airport to my hotel, I asked my taxi driver, Abdul Nasser, his views of the current situation. “What do you want me to say,” he answered with a gloomy face. “What about you? If this were your country, what would you say?” Although Abdul Nasser had turned the question on me, he didn’t waited for a response and continued, “We are not helping revive our country. We all want the chair. I'm afraid someone will gain it, but we will lose Tunisia.”

I wanted to move around the capital and see how people were living under the current circumstances. At 8:00 o’clock in the evening, there were relatively few people in the streets. The residents of Tunis are worried about the uncertain future of their country. Even in the famous Habib Bourguiba Square, the number of people can be counted in a glance. Most of the restaurants and cafes there were either closed or about to be shuttered.

“History is still to be written in our country,” said an old man I met in a café. He had survived Bourguiba as well Zine el Abidine Ben Ali. Two years ago, he had joined everyone else in the streets with the same hope and goal: change. Although change indeed took place — with Ben Ali fleeing the country, leaving it to protesters and opposition movements — there was never a moment of contentment for Tunisians. They have since been on a long journey of division, political standoff and now bloodshed.

The assassination of political activist Chokri Belaid on Feb. 6 revealed much about what had been unsaid: The struggle for power in the Arab Spring's birthplace is in a place beyond compromise. Belaid had been a bitter foe of the ruling Ennahda movement, and only hours before his death, he had warned in a television interview that political assassinations would be coming. He placed the blame for them beforehand on the ruling party, which he said was “facilitating attacks on opponents.”

Differences between the Ennahda movement and its rivals is becoming existential, another version of the internal conflict in other chaos-stricken Arab states, including Egypt and Lebanon. Those who support Ennahda regard the leftists as traitors and part of a western conspiracy to topple the Islamic movement; they even accuse members of the left of fomenting a counterrevolution on behalf of Ben Ali.

Meanwhile the leftists and other secular opposition parties accuse Ennahda of being a Qatari puppet. They claim that Tunisia is being transformed into an Islamic state and that the Islamist movement has formed its own militia in a step toward developing a force similar to Iran’s Revolutionary Guards. Ennahda consistently denies the latter allegation.

The two sides are now facing off in the streets. They have called for rallies, which have proved the popularity of both their points of view. “It’s us, the normal people, who'll pay the price,” said Ahmed, a young man who graduated last year and is still looking for a job. Ahmed wants to leave Tunisia. He says he will go anywhere. “There is no future here. We thought the revolution would bring us prosperity, but here we are worse than before. Add to that the instability. Is this what so many died for?”

Much else might die if the standoff continues. In one restaurant, people were busier watching a cross-fire television show than eating. On the screen, two men almost came to blows because of disagreement over the host's statements. The scene took me back to Lebanon after the Rafik al-Hariri assassination, when people were ready to kill to prove they were right. For Tunisia, Belaid’s assassination has become a milestone in its modern history. The only difference between it and Lebanon is that here there are no sects fighting each other. This might be a blessing, or who knows, maybe a curse.