The Israelis seem to miss deposed Egyptian President Hosni Mubarak, whose concept of peace was not much different from that of his successor, Muslim Brotherhood President Mohammed Morsi, writes Jacky Hugi. 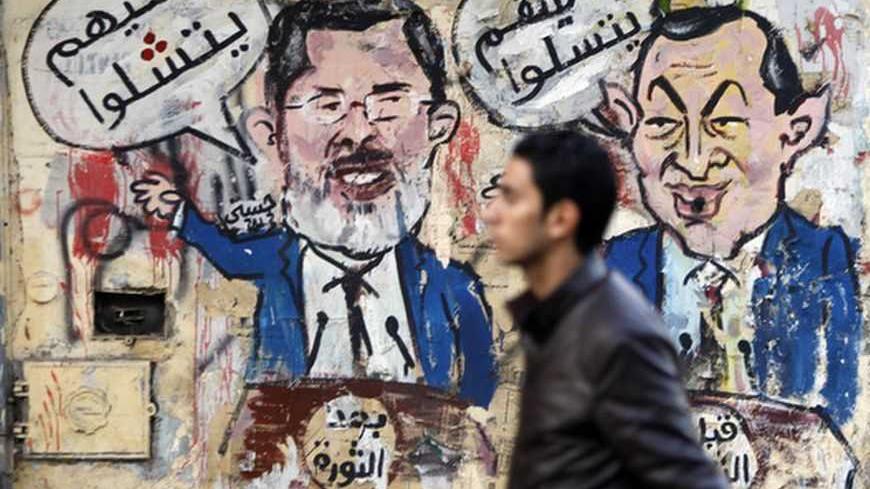 A protester walks past graffiti during a march at Tahrir Square in Cairo, Feb. 11, 2013. - REUTERS/Amr Abdallah Dalsh

The clamor rising from Tahrir Square in Cairo was a common scene, familiar to all and sundry. The masses packing the square were calling out for the resignation of the president and crying for his prosecution on charges of killing demonstrators, while opposition politicians tried to outdo each other denouncing him on satellite TV channels.

However, this time around, it was not deposed Egyptian President Hosni Mubarak who was put in the crosshairs. The calls against the president were heard on Feb. 11 this year, and they were directed at none other than current President Mohammed Morsi.

Exactly two years after their former president had been overthrown, the Egyptians realized that the revolution they sought to bring about could not be accomplished at a stroke. The struggle against corruption, the promise to bring to justice those accountable for the killing of young people, the expectations for a better economic future have all vanished into thin air. Egypt finds itself at present precisely where it was on the eve of the military coup d'état of February 2011 — possibly even worse off.

The Israelis, who are closely watching the tense situation, seem to miss Mubarak, whom they regarded as a friend. Alas, they are in the wrong. In terms of his concept of peace and his view of Egypt’s relations with Israel, the apparently liberal Mubarak was not much different from his successor in office, Morsi, whose origins originate in the Muslim Brotherhood. An in-depth evaluation of Hosni Mubarak's concept of peace may present him in quite a different light, far removed from the image generally perceived in Israel.

Since he assumed office as president in the summer of 2012, Mohammed Morsi has declared on a number of occasions that his country would maintain all the international agreements and covenants it had signed. President Morsi, who is associated with the religious circles, apparently finds it difficult to pronounce the name of “Israel.”

Unlike the current Egyptian president, Mubarak had no problem referring directly to the State of Israel. However, all throughout his presidency he refrained from visiting Israel. Public opinion in Egypt, Mubarak used to argue, would never accept an official visit by an Egyptian president to Jerusalem as long as Palestinian lands were under occupation. It has since transpired that “public opinion” was actually a buzz word used by the regime to further its needs.

The cultural heritage left by Mubarak’s predecessor in office, the late President Anwar Sadat, who was shot to death while watching the military parade in October 1981, was a legacy of peace. The fifth president of Israel, Yitzhak Navon, disclosed in an interview with Israeli Army Radio a year and a half ago that Sadat had offered some time before his assassination to pump water from the Nile to irrigate the parched Negev region of Israel and make the desert bloom. It was a far-reaching proposal and given the circumstances, unlikely to materialize, but it testifies to the worldview of Sadat.

“We must educate our children to love their neighbors,” the late Egyptian president had said, as Navon recounted in the interview.

It was an altogether different story under Sadat’s successor, Hosni Mubarak. While cultivating his relations with the military and political top echelons in Israel, Mubarak kept the Israeli and Egyptian people out, barring them from taking part in the alliance of peace. As far as Mubarak was concerned, the peace with Israel was no more than a military and economic alliance. It carried with it no vision for the future, nor did it reflect an overall concept. Any Egyptian artist who sought contact with his Israeli counterparts was publicly denounced. Any Egyptian publisher attempting to translate a Hebrew work of literature was summarily censured. Any application by an Egyptian academy member for a permit to attend some scientific conference in Tel Aviv was abruptly rejected. Any Egyptian citizen planning to visit Israel was required to first obtain the approval of the Intelligence services. Mubarak and his close aides were in effect the only Egyptians allowed to meet with Israelis.

At the same time, the regime refrained from taking action against Egyptian journalists and politicians who went after those of their countrymen who sought closer relations with Israelis. Indeed, keeping its silence on the issue, it encouraged such persecution. Furthermore, while the Egyptian opposition was a handy excuse for his policy on Israel, Mubarak was not really afraid of the opposition to his regime. Rather, he crippled it and whenever necessary, crushed it. His associates pursued Islamist activists, liberal opponents and critics of any hue and color to the death, but never rebuked any anti-peace campaigners.

Egyptian satirist Ali Salem, who in 1994 set out in his car for a tour of Israel and journeyed across the country, published upon his return home his experiences in Israel and impressions of it in a moving travelogue entitled “A Drive to Israel: An Egyptian Meets His Neighbors.” In response, the Egyptian Writers Association ostracized him and the local newspapers, which had previously been featuring his articles, banished him.

The Egyptian Writers Association was not an independent body. Behind the scenes, Egyptian intelligence officials were pulling the strings. By punishing Salem, the regime sought to signal to the local intellectual elite that contacts with Israel were considered out of bounds. No one in power bothered to ask the Egyptian readers whether they were interested in learning firsthand about Israel.

In his official speeches, Hosni Mubarak presented “Egypt’s adoption of peace with Israel as a strategic option.” However, below the surface, hostility toward the Zionists was nurtured and fostered. Egyptian blogger Maikel Nabil, who recently visited Jerusalem, said that children in the Egyptian educational system are brought up to hate Israel and the Jews. The Egyptian media is rife with Anti-Semitic allegations, and cartoons portraying Israel as the devil have been commonly published in the local press for years. The Protocols of the Elders of Zion is freely offered for sale at any bookstall. The Egyptian regime has never seen any need to discourage such defamatory publications, which fan the flames of hatred of the "other."

The Egyptian regime used the Palestinian issue as a pretext for its policy of cold peace with its neighbors.

“Israel is an occupying, blood-shedding country,” declared the Egyptian minister of culture in the Mubarak era, Farouk Hosni. The Egyptian public, and even some Israelis, bought that argument and accepted the verdict. However, Egyptian solidarity with the Palestinians was rather selective. Thus, while the regime in Cairo publicly announced that it was standing shoulder to shoulder with the Palestinians, Cairo collaborated with Israel in imposing the blockade on Gaza.

The “solidarity” of the Egyptians with their Palestinian brethren was exposed for its real worth in the spring of 2010, when the Egyptian Football Association announced that the national team was to leave for East Jerusalem to play a friendly match against the Palestinian team. The announcement raised hue and cry in Cairo. How could the stars of our national team even think of visiting the occupied land and thereby grant the Zionists the right to approve their entry into holy Jerusalem, wondered the critics of the proposed voyage. Succumbing to pressure, the Egyptian Football Association called off the planned expedition of the national team. In the name of the professed Egyptian solidarity, the football fans of East Jerusalem and the West Bank were deprived of the fun of watching the Africa Cup champions in action.

Be that as it may, it should be borne in mind that Mubarak was faced over the years with a series of political challenges — two wars between Israel and Lebanon, two bloody intifadas and the expectation in the Arab street that Egypt, once the leader of the Arab world, would step in and intervene in favor of its kith and kin in their plight. It should also be noted to the credit of Cairo that, unfortunately, what Israel was after in those years was essentially security cooperation. In fact, it was convenient for Israel not to let in the throngs of Egyptian tourists eager to visit it, as they were liable to constitute a serious security burden if allowed to enter. What's more, Jerusalem naively believed that, under pressure from within, Mubarak could not possibly do more to warm relations with Israel.

Yet, regardless of the extenuating circumstances mentioned above, Mubarak cannot be vindicated. As far as Cairo’s relations with Jerusalem are concerned, the ousted Egyptian president was no different from his successor, even though he may have been, at least outwardly, more genial and friendly than Morsi.

The former Egyptian president never regarded peace as a gift to his people, but rather as a burden, and the same holds true for the president currently in power. They both inherited it in turn from the president preceding them in office, and they learned to accept it, as they both realized that its preservation was a supreme Egyptian interest. Deep inside, Mubarak saw in Israel an enemy state, the same way Morsi does. Mubarak deliberately kept his people in the dark, denying them any opportunity to become familiar with Israel. Instead, he nurtured the Egyptians’ hatred for Israel. And while cunningly winning Israelis, over, presenting himself as an ally of Israel, he was really no more than its business partner.

Morsi and Mubarak are both responsible for the same wrongdoing. Both acted on behalf of a repressive, rejectionist doctrine that prevents the Israeli and Egyptian nations from recognizing the significance of neighborliness and deprives future generations of the opportunity to grow up in a peace-seeking culture.

All the same, so far, Mubarak seems to be the greater culprit of the two — After all, he had thirty years to undo the wrong done. Unfortunately, he perpetuated it.

Jacky Hugi is the Arab affairs analyst of the Israeli army radio Galie-Zahal, a columnist for the Israeli business newspaper Globes and the former Arab Affairs correspondent for Israel`s Maariv.